The least successful variant of the Zero, the Hamp also may have had one of the most confusing designations!

After the jump, a look at the first major upgrade of Mitsubishi’s legendary fighter.

The development of the Zero, like many other types that saw long service, can get pretty convoluted at times.  I’ll try to keep this simple; I apologize in advance if it is still boring, or if my simplification goes awry! 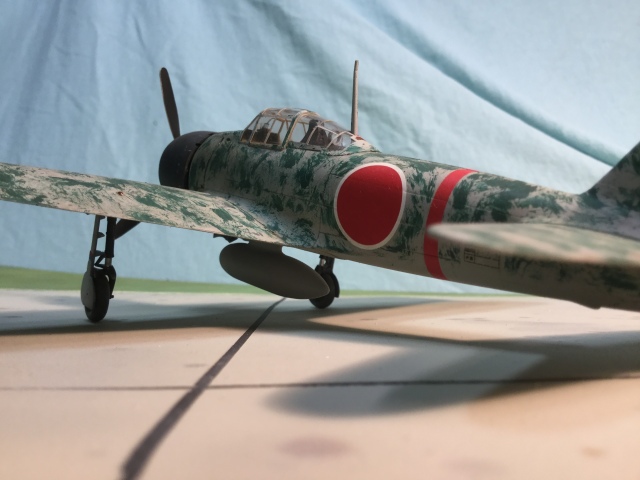 The model of Zero in service at the start of World War II used a Nakajima Sakae 12 engine with about 900 HP.  When a new version of that engine, the Sakae 21, came available in 1941 it delivered about 1100 HP and a two-stage supercharger for better high altitude performance. Work started immediately to adapt it to the successful A6M Zero.  Because the engine was slightly larger and consumed more fuel, the decision to reduce the size of the fuselage fuel tank (to accommodate the bigger engine) led to a loss of 500 miles of range.

The wing was also redesigned; the tips had previously flipped up to allow a better fit on aircraft carrier elevators.  On the new Zero the tips were eliminated.  This led to a distinct squared shape, an increase in speed and rate of roll, but a decrease in rate of turn. 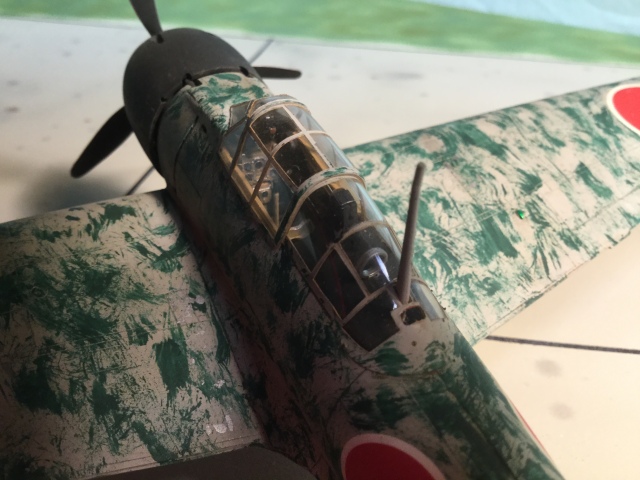 All these changes were not popular with pilots.  Japanese tactics stressed maneuverability, and deployment meant to take advantage of the type’s incredible range.  The changes reduced some of the type’s disadvantages against western fighters; but they also reduced the type’s advantages.

So as a fix, the wing shape from the earlier model Zero was restored along with increased fuel capacity on the wing tanks.  This satisfied most pilots and late build A6M3 Zeros proved to be very popular mounts.

But this all led to an interesting quirk in the designation system.  The primary Zero in service at the start of the war was the A6M2 Model 21.  The upgrade was the A6M3 Model 32.  With Japanese designations the “Model” is read as two digits; that is, “Model Two-One” became the “Model Three-Two”.  This indicates the third wing design and second engine.  Because of the unpopularity of the new wing, the redesign with the original profile was the “Model Two-Two”.  That means the Model 32 entered service first, and after about 500 were built it was replaced by the Model 22.  If you think that sounds confusing, just imagine the Allied Intelligence guys trying to figure out what these designations meant! (For more read “What’s in a Name – Japan“).

This overhead shows three major types of Zero. The A6M2 Model 21 is on the left (a model 11 was built in small numbers with the same wing shape, but no folding tips).
The A6M3 Model 32 shows the new squared tips, and the enlarged engine. Also, the 20 mm cannon in the wings were an improved type with a better rate of fire.
The A6M5 Model 52c right is the final major version. The wing has the same span as the Model 32 but the tips have been rounded. It also has an even more improved 20 mm cannon and a heavy machine gun in each wing. But it still uses the same engine.

When these square winged Zeros first showed up in combat, intelligence assumed it was a new type.  The type/naming system had been in use for a while with the original Zero known as a “Zeke”.  This new type was named in honor of the head of the Army Air Force General “Hap” Arnold.  But “Hap” didn’t last long as a new name, General Arnold was not amused and the name was switched to “Hamp”.  This may be the name this sub-type is best known by; but officially, when intelligence learned a few months later exactly what this new fighter was, its designation was changed again to “Zeke 32”.

The A6M3 did offer improved air to air capabilities. But in early 1943 it started encountering much improved allied types like this F4U-1 Corsair.
The allied improvements completely out-stripped the Japanese improvements.

This particular subject is from the Hasegawa kit, but decals were pilfered from an older Tamiya kit.  It represents an A6M3 based on Rabaul in early 1943.  At this point, most Japanese combat missions were very long range to hit Allied air bases on Guadalcanal or Port Moresby.  But the shorter range Hamp could not fly those missions.  It could fly tactical missions over the Buna/Gona area on the north coast of New Guinea (where major land campaigns were under way) and was very useful for local air defense. A small number were also deployed forward to small airstrips in the Solomons or New Guinea.  But only the older Model 21 Zeros could fly all the way from Rabaul to the major allied bases.

A captured Hamp being test flown in the US.

Like all previous Zeros, this airplane would have been delivered in an overall grey color.  But because of increasing pressure from allied air power the Japanese had started applying disruptive colors to the tops of all their planes in the field.  In this case, we see a Navy Green color has been mopped over the upper surfaces.   This was a lot of fun to apply.  I just used an old worn-out brush, and pretended I was dry brushing with a wetter than normal brush!   It looks a little garish, but this was probably good camouflage for when it was pushed back under the trees at its base.  And for what its worth, I think this jungle camo and the square tips make this a very attractive Zero.