The Zero was certainly the most famous Japanese aircraft of World War II. The late, Model 52c Zero was much improved over the version used at the start of the war.  But it couldn’t compete with more completely modern types in service with the Allies.

After the jump, I’ll look at this late model of the famous fighter.

At the start of the war in the Pacific the Zero came as an ugly surprise to the Allies.  It was fast, well armed, long ranged and highly maneuverable.  But there’s math to aircraft engineering, those strengths brought weaknesses.  The Zero was very lightly built, lacked armor for the pilot and didn’t have self sealing fuel tanks.  Most planes also lacked radios, and many pilots chose to fly without parachutes.  Making the Zero a very dangerous attacker, but fragile. 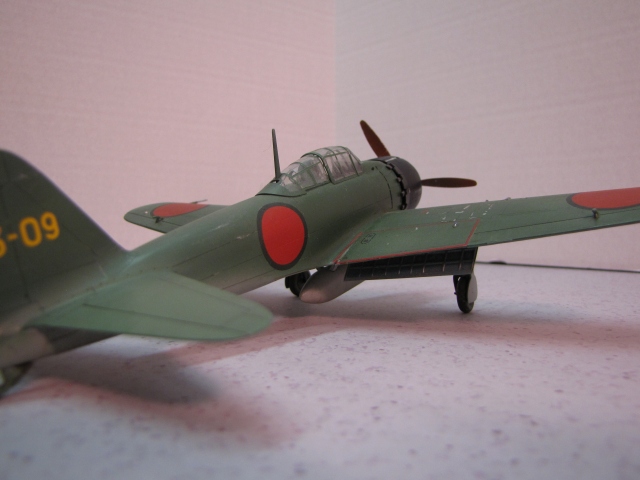 As the war progressed, allied pilots learned to use their strengths more effectively.  This generally meant high speed diving attacks and avoiding turning fights.  For the British, this put them in precisely the opposite position they were in against German aircraft.

The Japanese responded by upgrading the Zero.  It got more horsepower, going from about 900 hp to about 1100 hp.  Some pilot armor was added, self sealing fuel tanks installed.  The extra weight cost maneuverability but added to diving speed.  A new wing was designed with a sturdier structure to withstand those higher diving speeds and carry more external stores.  And firepower was increased.  Early models of the Zero had two 7.7 mm machine guns in the nose and two 20 mm cannon in the wings.  This late model 52c had replaced the nose guns with a single 13.2 mm machine gun, and added a similar gun to each wing.  Three heavy machine guns and two light cannon makes for a pretty good punch. 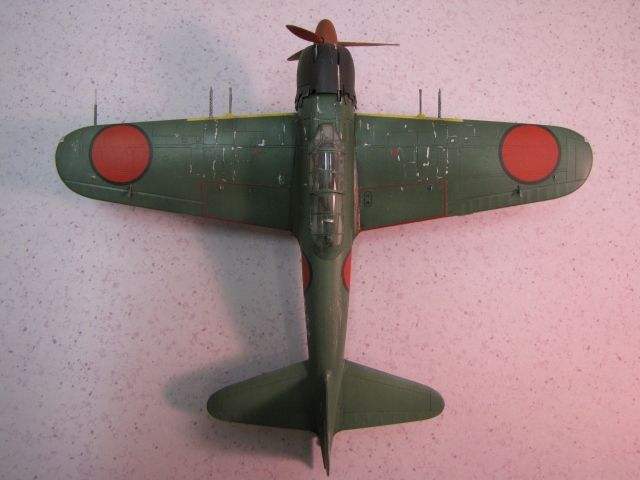 If you look closely, you can see a single machine gun in the right hand cowl position. The left side is blank, even though the cowling itself is carried over from previous versions of the Zero and still has a second opening for a non-existent gun.

Their pilot training suffered an even more catastrophic collapse.  At the start of the war, Japanese pilots were the best and most experienced in the Pacific.  But by war’s end, new Japanese pilots entered combat with maybe 50 flying hours.  While a US Navy rookie might have 500.  Big difference.

This particular Zero was flown by CPO Tanimizu while based in mainland Japan.  He was an ace and had at least two B-29 kills.

The kit is Hasegawa, the decals are Aeromaster.  I love the Hasegawa Zero kit.  It looks beautiful like a Zero should and goes together easily.  Except for the aileron control rods.  Stupid little parts.  There’s more than a couple of them lost in my model room carpet…