I always love the 56th Fighter Group.  They were the most successful Fighter Group of the 8th Air Force in air to air combat, and they were the only Fighter Group that hadn’t converted to Mustangs by war’s end; they kept their beloved Thunderbolts in spite of pressure from 8th Fighter Command and Washington to give them up.  The advantages of being the best… 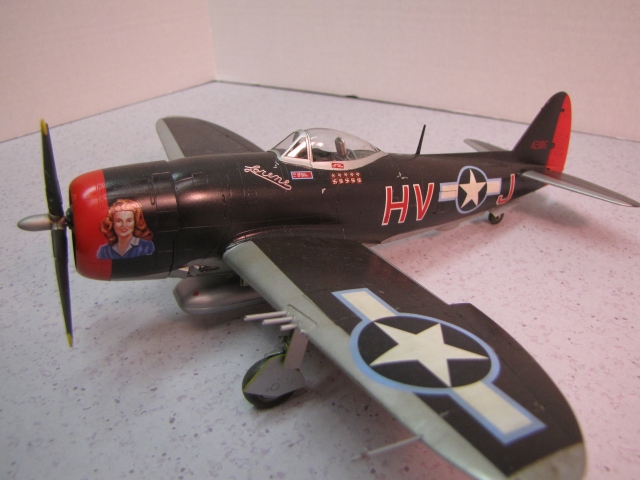 After the jump, we’ll look at a late war 56th Fighter Group Thunderbolt.

Starting in early 1944 most new aircraft delivered to the US Army Air Force came in a bare aluminum finish. But in the weeks leading up to D-Day an order went out for “tactical” aircraft, especially those that might relocate to the continent, to be given camouflage.  56th Fighter Group surely knew they weren’t really considered tactical, they were attached to the 8th Air Force whose mission was strategic bombardment.  But I think someone at Group HQ didn’t like silver much.  All three of the group’s squadrons were given unique camouflage colors.  62nd Fighter Squadron took an almost British looking Green/Grey scheme.  63rd Squadron took on a more garish light blue/dark blue scheme.  While the 61st Squadron, the subject here, painted their upper surfaces black.  Maybe.  They were known as the “black-bolts” and they sure look black in period photos.  But a few veterans have said (at least some of) the paint was sourced from a local auto body shop and had a distinct red/burgundy cast to it.  So that’s what I recreated here.  I think its a very fun look.

Also of interest, the 56th Fighter Group was uniquely equipped with the ultra high performance P-47M model.  Due to the German jet threat, and delays in getting an American jet into combat, the P-47M was sort of an emergency stop-gap.  It used the high output version of the R-2800 engine being developed for the long range (and much heavier) P-47N Thunderbolt, on the earlier, and smaller, P-47D airframe.  There were serious teething problems with the engine, and horror of horrors, the 56th had to fly a few missions with Mustangs before their P-47Ms were fully combat ready.  But with 2800 hp and a top speed of 473 mph it may have been worth the wait.  The 56th would be the only operator of the P-47M.

I also like its comparatively clean lines.  While most Thunderbolts had racks and hard points for extra ordnance or fuel under the wings, the M model did not.  The original designer of the T-Bolt, Alexander Kartveli, had always opposed hanging “Christmas ornaments” under his airplane.  But the realities of combat dictated otherwise. Kartveli was undoubtedly pleased that the M model left the factory clean except for the belly rack.

“Lorene” was flown by Lt. Russell Kyler, and was named for his girlfriend.