A small number of American pilots got into the air over Pearl Harbor on December 7, 1941.

After the jump, a brief look at one who got airborne on that extraordinary day.

Lt. Rasmussen was awakened on Dec. 7 by the sound of bombs exploding outside his barracks window.  When he looked outside to see what was going on, he saw Japanese aircraft and responded quickly.  He strapped on his .45 sidearm over his pajamas and ran out to the flight line.  After locating an intact P-36 he helped load it with ammunition during the attack.  When there was a lull, he and three other pilots took off.

They found and fought a larger group of Zeros.  Early on, Lt Rasmussen discovered he only had one working machine gun; the .30 in the P-36’s nose jammed leaving only the single .50 working.  In several minutes of battle the small flight claimed three kills for one loss.  Lt Rasmussen’s P-36 was damaged with about 500 bullet holes, and he was credited with one kill.*

This was Phil Rasmussen’s only kill.  He later switched to bombers and bombed Japan late in the war. 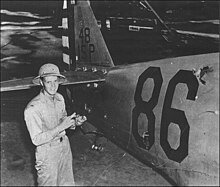 Phil Rasmussen alongside his damaged P-36 after the attack.

The subject aircraft here is from the Hobbycraft kit with decals cobbled together from a variety of sources.  The number “86” on the side of the aircraft is slightly underscale.  I would be eager to see a more sophisticated P-36 kit come available, but for now this kit is all we have in 1/48.
The P-36 first entered service in the mid-1930s and was a contemporary of the Hawker Hurricane and Messerschmitt Bf109.  It was very successful on the export market, especially in sales to France.  At the start of World War II it was the only French fighter program that had been delivered on time and on budget, and was the most numerous fighter in French inventory.  It acquitted itself well in the Battle of France.

The P-36A at the Museum of the United States Air Force is marked as Phil Rasmussen’s plane from December 7 as the pajama clad pilot prepares to mount up.

The P-36 shown with a Hawk 75N in Thai markings. The Hawk 75 was a simplified, cheaper export version of the P-36.

The type was very popular with pilots, it was considered very maneuverable and a lot of fun to fly. But by the late 1930s it was obvious something faster and more powerful was needed. Several new types were being developed including the much faster P-39 Airacobra and the twin engine P-38 lightning.  Curtiss offered an improvement of the P-36, which replaced the type’s R-1830 engine with a liquid cooled Allison V-1710; and the P-40 was born.
P-40s were being rushed into service those couple of years before the Pearl Harbor attack, but the P-36 remained in service at many locations.  However December 7th was the only time the earlier Hawk flew combat in US markings. The export version, the Hawk 75, saw combat with France, Britain, Finland, China, Thailand and several others.

The P-36A with a P-40N. The P-40N was the final production version of the family that started with the P-36. The similarities in the wings and tail are obvious.

The P-36 and its rival on December 7. The Zero was a more advanced design, but not by as much as many suppose. The P-36 was mainly handicapped by the surprise attack and some disparity in pilot skill levels