The second of Germany’s main tanks at the start of World War II was the Panzer IV.  At least, that was the plan.

A brief look at this important type after the jump.

In the late 1930s, the German Army had a plan to equip mostly with Panzer IIIs and IVs. The Panzer III had an anti-tank gun and was there to go after enemy armor, while the Panzer IV had a 75 mm howitzer and would provide indirect fire for armor and infantry units. But war came before the Wehrmacht (German Army) had hoped, which meant many Panzer Is and Panzer IIs (meant to be training tanks under the master plan) were still in front line units; along with a substantial number of Czech built Panzer 38t.

But when tank size and power started to increase it was found the Panzer IV had more potential for growth than the III, so it quickly became Germany’s main tank. When the Panther was later introduced as the IV’s replacement it proved to be a complicated and troublesome tank.  Whatever its excellent properties might have been, the Panther never would completely replace the IV.  The Tiger was always seen as a more specialized heavy unit; so the IV labored to the end of the War as Germany’s most numerous tank.

The “skirt” around the turret is there to break up or detonate incoming shells before they hit the main armor.

This particular example is from the Tamiya kit.  The original fought in France in 1944. 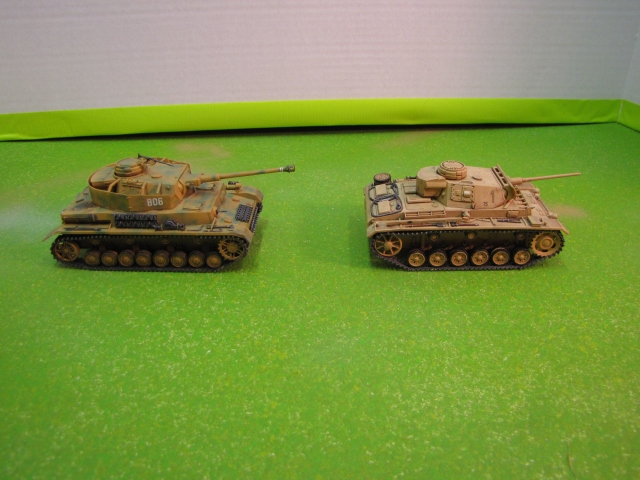 The Panzer IV and Panzer III