Everyone knows the famous warbirds flown by the major combatants during the war years.  But many of the smaller countries fought too.  The Second World War is commonly considered to have started on September 1, 1939; when Germany attacked Poland.

So let’s take a brief look at an important piece of Polish hardware from that time.

In the 1930s the Polish military built its own aircraft.  There are both advantages and disadvantages to doing this.  Big advantages have to do with both national pride and supporting the domestic strategic infrastructure.  Meaning the country has both the knowledge and ability to make its own weapons. 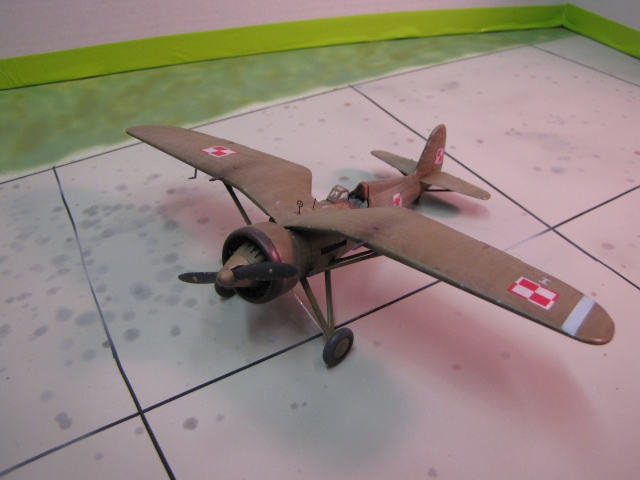 But a huge disadvantage for a country the size of Poland is they lack the financial resources to keep up with the bigger countries.  This was particularly a problem of the 1930s; this was called the Golden Age of aviation, partly because the pace of development of the technology was blistering fast.  Every plane was obsolete by the time it entered service (!).  Germany, Britain and the US might support a continuous development cycle, where as each type enters service its replacement is already in testing; but Poland could not keep up.

In this view you can see a machine gun in the fuselage side, and one in the wing. That’s a total of four light machine guns, making this the heavily armed version of the P.11. Most planes did not mount the wing guns.

So when the PZL P.7 entered service in 1932 it was as good as any fighter in the world.  The improved P.11 was ordered the next year.  But by the time the war started it had been left hopelessly far behind.  Its 575 hp being about half what most country’s fighters were using.  Its aerodynamics (I love the open cockpit and fixed landing gear!)  are obviously dated; and even the most heavily armed versions only had four light machine guns.  By most counts the plane was popular with its pilots and was fun to fly; but 242 mph won’t catch many Messerschmitts, it would even struggle against the latest bombers.

Open cockpit, ring and bead site on the wing top. What war was this?

However, this particular aircraft was the mount of Stanislaw Skalski.  He was the top Polish Ace of the Battle of Poland with four kills, plus one shared.  He escaped Poland and wound up flying for the RAF the rest of the War; finally amassing 18 kills, plus three shared.  Those later kills coming in Hurricanes, Spitfires and Mustangs.  After the War, he was arrested by the Communist government of Poland for espionage (he had friends in the west) and sentenced to death.  The sentence was commuted to “life”; and a later Polish government released him in 1956 and allowed him to rejoin the military.  Eventually rising to the rank of Brigadier General.

The asymmetric placement of the national insignia on the wing top was to avoid providing an opponent with a perfect aiming spot.

This kit is by Mirage; a Polish company that specializes in Polish subjects.  Fitting.  This was a trickier build than most of the main stream kits I do, but not horribly so.

Stanislaw Skalski in the cockpit of his P.11c

I'm 5o-something years old and live in Ypsilanti, Michigan. I'm happily married to Jodie. I was an air traffic controller for 33 years and recently retired; grew up in the Chicago area, and am still a fanatic for pizza and the Chicago Bears. My main interest is military history, and my related hobbies include scale model building and strategy games.
View all posts by atcDave →
This entry was posted in Fighter, Poland and tagged Aircraft Models, Scale Models, World War II. Bookmark the permalink.