A Day at Pearl Harbor

There may be no one place more central to the American story of World War II than the naval base at Pearl Harbor.  The name alone means something to almost every American, it has to be spoken with a certain gravitas. 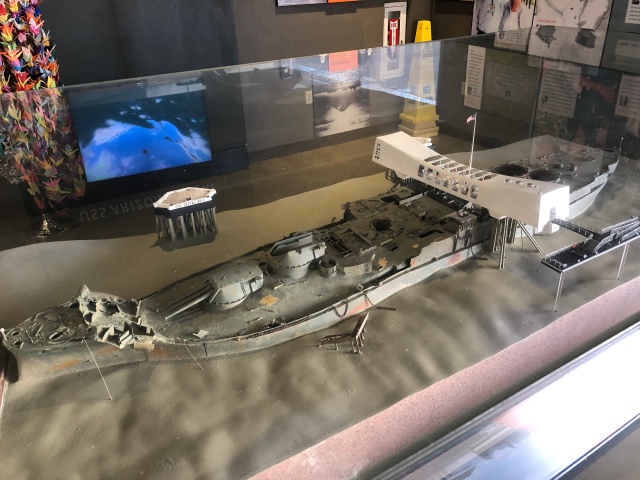 Well, this is a scale modeling site of sorts! First thing on arriving at the memorial is two small museums, “The Road to War” and “Attack on Pearl Harbor”.  This model of the Arizona and it’s memorial is derived from extensive underwater surveys. 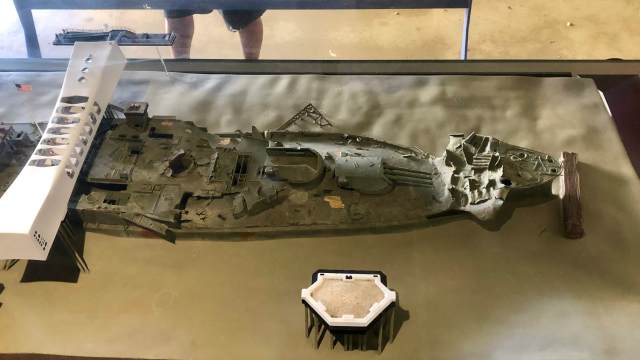 I’m sure no reader of this site will be surprised to hear that’s made Hawaii a sort of dream vacation for me almost as long as I can remember.  The great thing is, once we felt  we could afford it (!), my wife raised no great objections to the idea! I suspect she was thinking of other things to do there?

There are many ways to visit Pearl Harbor and other associated sites in Hawaii; we chose the “Stars and Stripes” tour by Roberts Hawaii.  That was a guided 6+ hour tour that took us to Arizona Memorial center, the USS Missouri and Punchbowl Cemetery.  I missed the Museum of Pacific Aviation, but given the confusing nightmare of Oahu traffic I would strongly recommend some sort of bus/shuttle tour package. 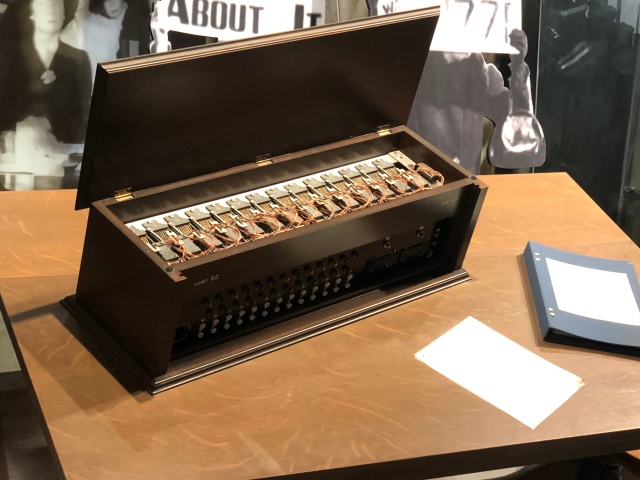 Purple Machine.  The Japanese diplomatic code was known as “Purple”.  US codebreakers we’re highly proficient in codebreaking before the Pearl Harbor attack.  But diplomats weren’t in the know on military plans and operations. 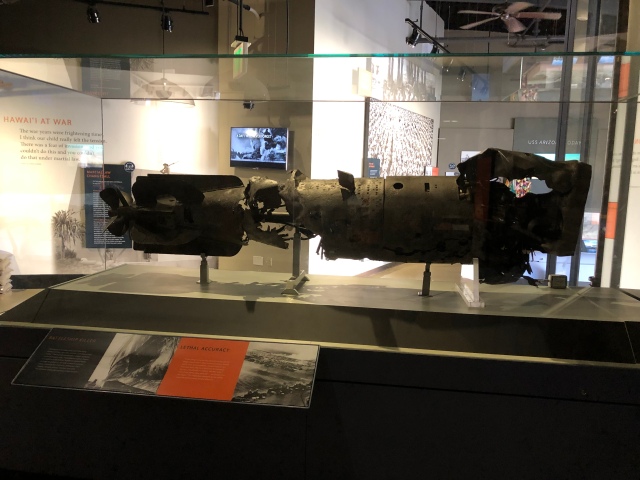 The remains of a Japanese air launched torpedo. 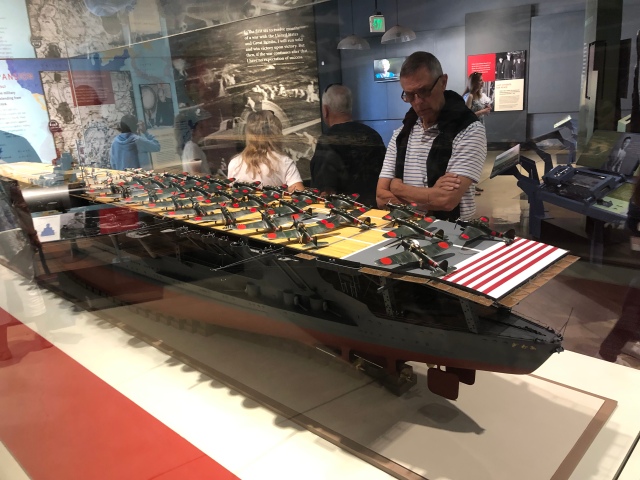 Model of the IJN Akagi 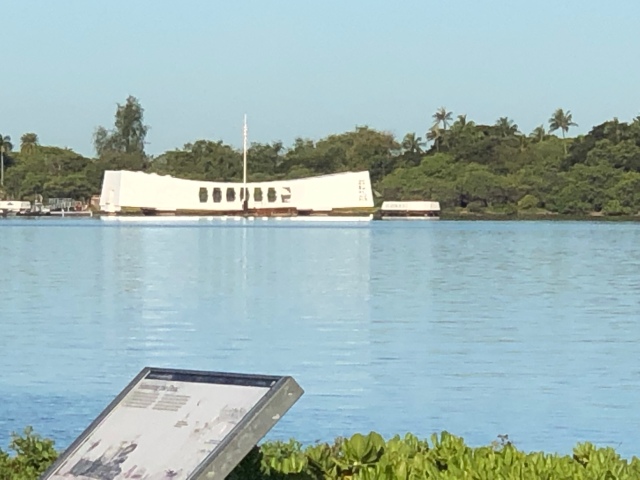 The boat dock was down for maintenance during our visit, but ferry boats still take visitors out to the site. The Arizona lies on the bottom here, and the memorial crosses about mid-ship. 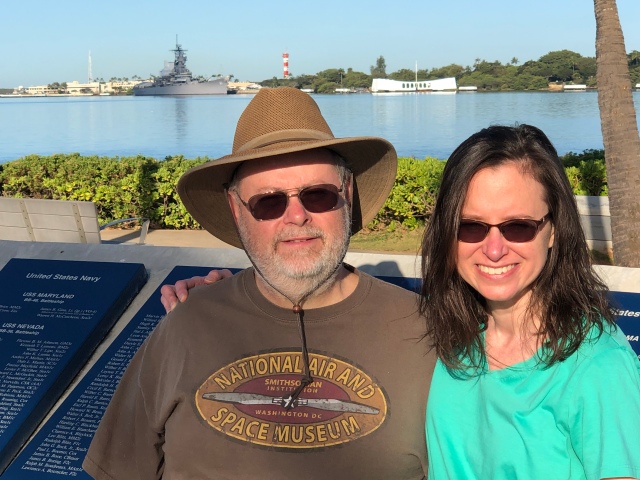 If you can look past the fat guy and the cute lady with poor taste in men, that’s the USS Missouri on the left (anchored where the USS Oklahoma was on 12/7/41) and the Arizona memorial to the right.  The orange and white tower in between is the control tower for Luke Field (Naval Auxiliary Landing Field) on Ford Island.

The Arizona’s Turret 3 Ring is still visible above the water.  The white structure behind is one of the moaring mounts that made up battleship row.  All of them now carry the name of the ship tied up to them on 12/7. 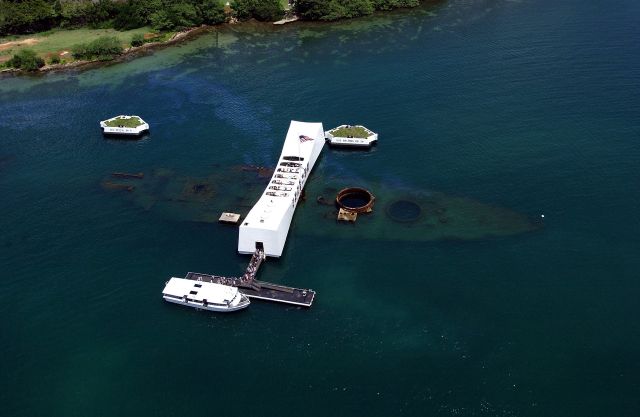 A photo I could never take… Excellent aerial view of the sunken Arizona, Memorial and functioning passenger dock. Notice discoloration in the water from the ship’s still leaking bunker oil. (from Wikipedia) 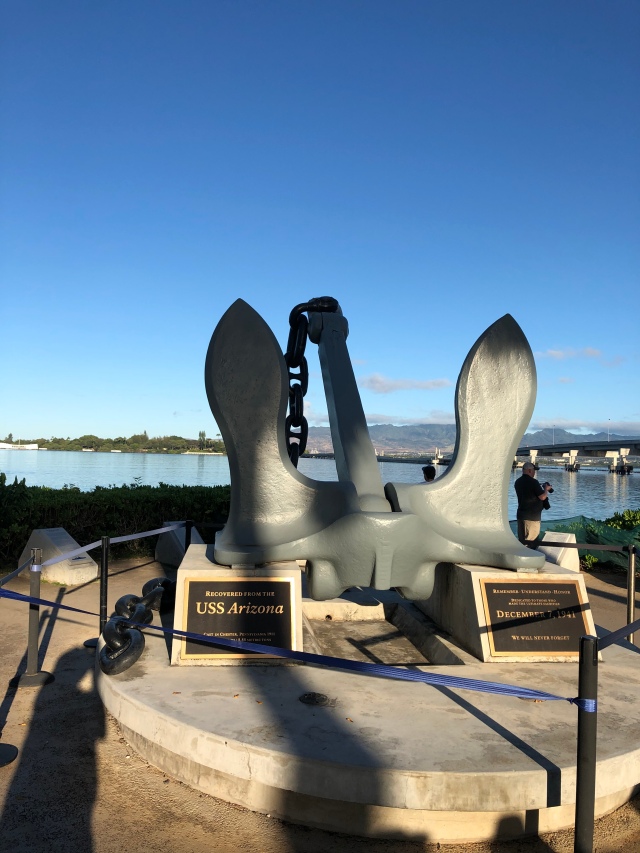 Arizona’s anchor was thrown 200 ft in the air when the magazine blew up. 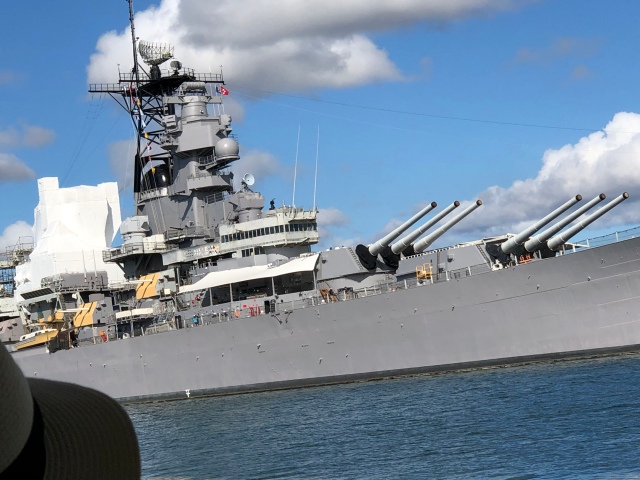 The Missouri faces the Arizona. They bookend the beginning and end of the Pacific War. 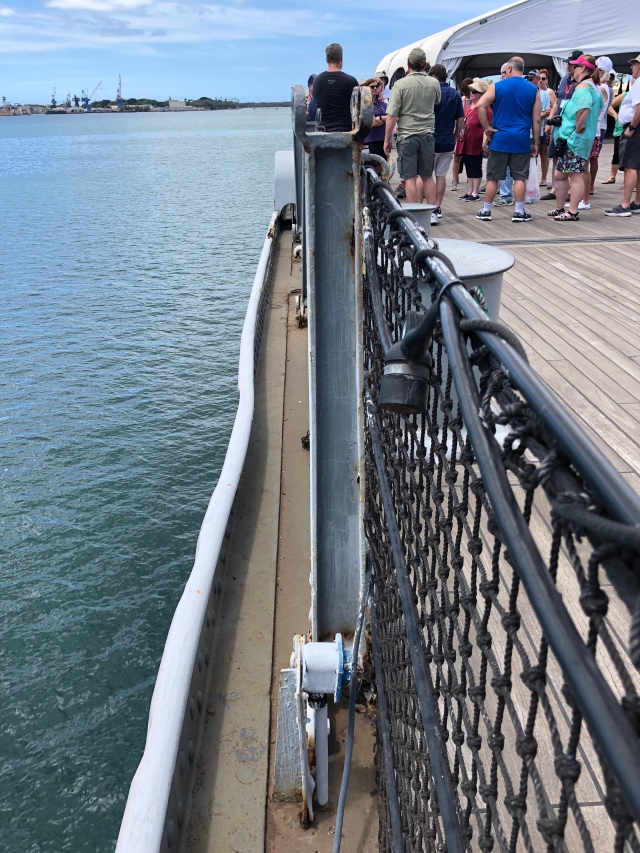 The slight bend is from where a Kamikaze struck Missouri during the Okinawa Campaign. 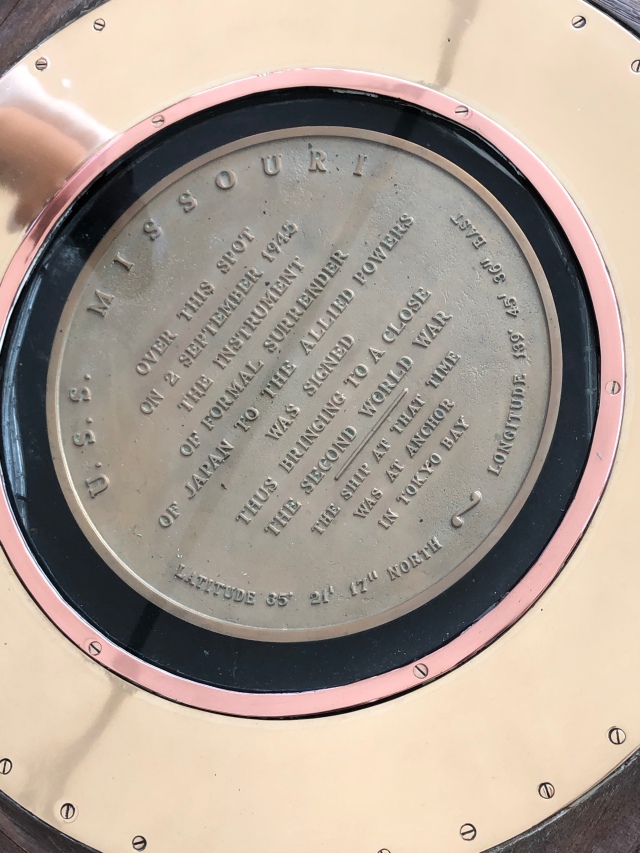 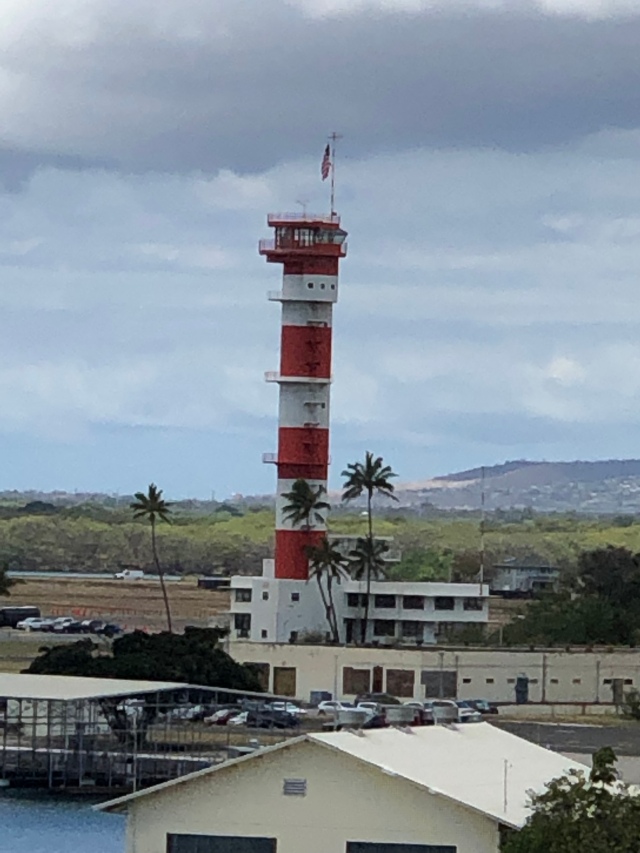 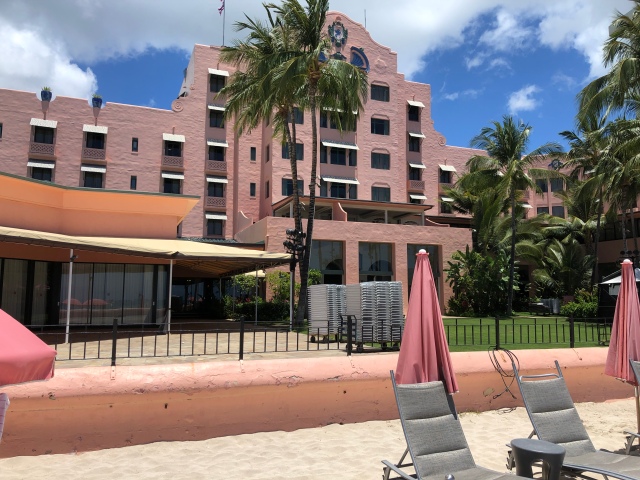 Right down the (Waikiki) Beach from where we were staying is the Royal Hawaiian Hotel. During WWII this (and Moana Surf Rider next door) was leased by the Navy for officers on leave/pass. 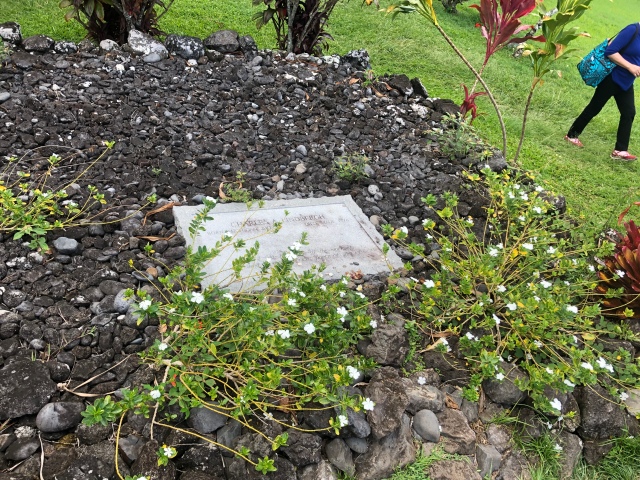 Elsewhere in Hawaii… Charles Lindberg’s Gravesite is on Maui.

Other significant sites, like the Utah Memorial, are in restricted areas of the still active naval base and not accessible to the general public.  And of course there’s so much more we either missed, or failed to get good photos of, like many coast defense gun sites and pill boxes around the islands.  Overall an excellent vacation and American pilgrimage.  But there’s never enough time to do it all.

I'm 5o-something years old and live in Ypsilanti, Michigan. I'm happily married to Jodie. I was an air traffic controller for 33 years and recently retired; grew up in the Chicago area, and am still a fanatic for pizza and the Chicago Bears. My main interest is military history, and my related hobbies include scale model building and strategy games.
View all posts by atcDave →
This entry was posted in Museums and tagged Museums, World War II. Bookmark the permalink.

12 Responses to A Day at Pearl Harbor