This large, strategic bomber is closely associated with the final phase of the defeat of Japan and the end of World War Two. Between its expense, troubled development and role in that apocalyptic end it manages to be controversial to this day.

Join me for a look at the last of the great piston engine bombers to enter service.

Going back to the mid 1930s the US Army Air Force had requested very heavy, very long range bomber from several manufacturers.  The Boeing XB-15 looked very much like an overgrown B-17 while the Douglass XB-19 was even bigger.  Both tested long range and high altitude systems that would later prove valuable.  But the technology, especially engines, wasn’t really there yet and both aircraft served as test beds and (later as) long range transports.

This beast is so big I gave up photographing it in my usual “studio”, and settled for the middle of the floor!

As war loomed closer a new generation of very heavy bombers was requested.  The initial idea was just about hitting incoming ships as far out as possible.  Any reader familiar with targeting and accuracy of the period will recognize this as a fool’s errand.  But the idea that took hold was to be able to hit Nazi Germany if England fell.  The two very heavys that made it into production were Boeing’s B-29 Superfortress and Consolidated’s B-32 Dominator.  Make no mistake, neither of these could actually make the round trip to Germany from New York.  That would have to wait for the post-war generation Convair B-36 Peacemaker.
But the B-29 and B-32 were both much bigger, with a longer range and heavier load, than anything currently flying.  The B-32 was actually a more conservative design, being sort of an improved B-24 Liberator and featuring manned turrets.  While the B-29 was a revolution.  It featured pressurized crew quarters for prolonged operation at high altitude, managing 350 kts at over 30000 feet.  Maximum combat range was 3200 miles with up to a 20000 lb bomb load.  Its four R-3350 engines delivered 2200 hp each. But the most radical feature was four remote control turrets (plus a manned tail position) that utilized a fire control computer that let four gunners track targets and utilize the combination of turrets that gave a gunner with the best shot the most firepower. I can’t begin to imagine how this worked in an analogue age; but it did and worked well enough.  Later versions were also built with ground tracking/bombing radar.
No doubt such a radical new machine had massive development challenges. It went over budget and over time so severely it was threatened with complete cancellation on several occasions.  The simpler B-32 was ordered into production as a hedge against the B-29’s failure.  But ultimately, B-29 problems were ironed out, to the extent almost 4000 were built as opposed to just over 100 B-32.

Consolidated B-32 Dominator was the B-29’s understudy.  It saw some action with the 5th Air Force at the end of the war, but it is mostly a footnote in the B-29 story. (Wikipedia)

As B-29 production picked up in early 1944 the list of known defects expanded too.  At one point, B-29s were being delivered with over 1000 documented changes that needed to be accomplished before they were considered ready for service.  Modification centers were hopelessly behind.  This led to “The Battle of Kansas” in March-April of that year were 150 aircraft were grounded and modified outside in the cold (because there were not enough large hangers to hold them) just to get a force large enough to deploy. [Sort of like the current F-35 program, except you know, 2 months instead of 15 years…]
Ultimately the type went to war with most major issues resolved.  Unfortunately the R-3350’s tendency to overheat and burst into flames was not among those things fixed.  The engine had a variety problems that were fixed one by one, until by the end of the war the engines were mostly reliable.  As I understand it, current warbird B-29s (Fifi and Doc) still have to pay close attention to engine temperature and avoid long idles and run-ups.

When the B-29 did enter combat it was in June of 1944 from bases in India and China.  This meant flying fuel and supplies over the Himalayas (“The Hump”) to forward bases in China.  Since the China theater was already short of supplies the B-29s mostly had to do it themselves with half a dozen or more Hump missions required for each bombing mission.  Obviously NOT an efficient way to introduce an expensive bomber with numerous teething problems into action!
But the same month of that first B-29 mission also saw the capture of the Mariana Islands in the central Pacific.  Using the Marianas (Guam, Saipan, Tinian) as a forward bomber base had been envisioned way back in development.  And given the massive supply (and other) problems associated with China it was quickly made a priority to turn those islands into a massive bomber complex.

B-29 bombing of Japan started very similarly to bombing in Europe, with tight formations flying at high altitudes without fighter escort.  A B-29 formation at 30000 feet proved to be more secure than heavy bombers had been against Germany; both because the B-29 was a tougher bird and Japanese fighter defense was pretty weak.  But other serious problems emerged; mainly, accuracy from that height was horrible.
Enter Curtis LeMay.  General LeMay had been a successful organizer and innovator for the Eighth Air Force in England. He was put in charge of operations from China in August of ’44 then later moved to the Marianas when focus shifted to those bases. When faced with the myriad of problems with the bomber campaign against Japan he tried several fixes; ultimately deciding to send his bombers in low, at night, with incendiaries.  Due to Japan’s decentralized industry and urban construction of wood and paper, LeMay gambled that radical change in tactics would yield exceptional results.  The gamble paid off and Japanese industry was brought to a virtual stand still.
More conventional attacks continued too against more pin point targets.  And several high profile targets were left unmolested for special treatment later.  Of course the atomic bombings in August of 1945 are an involved story in their own right.  Suffice to say, they made a profound and shocking statement to the Japanese government that now one plane carrying one bomb could be almost as dangerous as the mass fire bombing raids of the months prior.

This particular build is from the vintage Monogram B-29 kit.  At this point, I truly have nothing good to say about that kit.  It is a total bear to build, virtually every single part needed some level of clean up; and every single seam needed filling and sanding, often several times over, to get an acceptable appearance.  And I have to admit late in the project I sort gave up on certain elements.  All told this represents almost two years of work.  That isn’t all the kit’s fault, we started a large home remodel project shortly after I started work on it.  For over six months my model shop was closed up and nothing got done.  But even when I got going again, this project was protracted and discouraging. In the end I reached a level I’ll call presentable, but far from my best looking work.
Its also sort of mash between an original issue 1977 boxing and one of the 2004 reissues. I had wanted to do “Thumper” for quite some time.  It was one of the first B-29s to return stateside after a successful tour of duty.  And its fun, Disney inspired nose art was irresistible to me.  But I feared that would be the catch.  Who would ever pay Disney for the rights to make a decal?  Well Monogram found a way to make it happen back in 1977, but those markings have been conspicuously absent from every version of the kit since.  So I was pretty excited to find such an old boxing of the kit at a model resale shop (Dean’s Hobby Stop in Flushing Mi).  But that original boxing was missing (as in never had) several parts required for an early B-29 (propellers and bombing radar were wrong).  So I borrowed parts from the later issue kit that had fixed the oversight for early B-29s.
So guess what happened.  As I was nearing the end of this build Kits World Decals released new, state of the art, decals for Thumper.  Actually, given the Murphy’s Law nature of this entire build it might have been more fitting if those decals came out a couple months later. So those decals are what you see here.  They were easy to work with, and look much better than the original kit decals did.  And I hope Kits World doesn’t get in trouble for my mentioning them…
In the end, I call this a snake bit project all the way through (Except for the decals!). The final frustration, that first picture up top was taken two days before the rest; because I manged to break it in three different places for that one shot and it took two days to fix it. 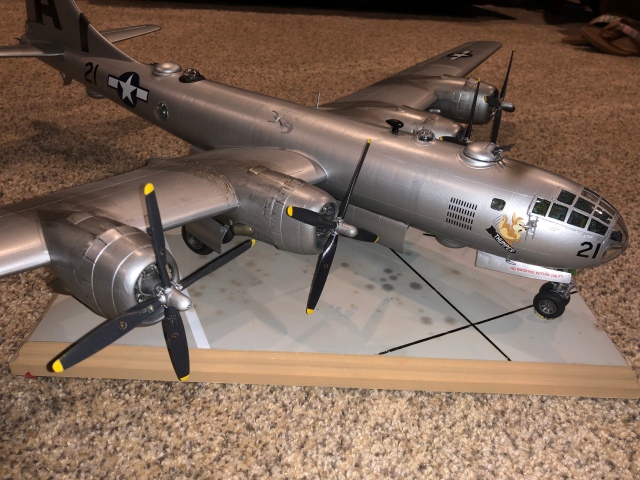 A hint of scale perspective, Thumper towers over a jeep. 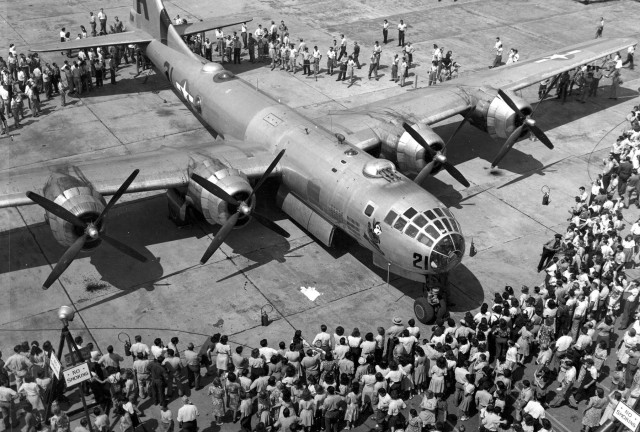 I'm 5o-something years old and live in Ypsilanti, Michigan. I'm happily married to Jodie. I was an air traffic controller for 33 years and recently retired; grew up in the Chicago area, and am still a fanatic for pizza and the Chicago Bears. My main interest is military history, and my related hobbies include scale model building and strategy games.
View all posts by atcDave →
This entry was posted in Bomber - Strategic, USA and tagged Aircraft Models, Scale Models, World War II. Bookmark the permalink.

15 Responses to Boeing B-29 Superfortress