One of the most important weapons to come out of the war was the Soviet T-34 tank.  It revolutionized tank design and shocked the Germans. 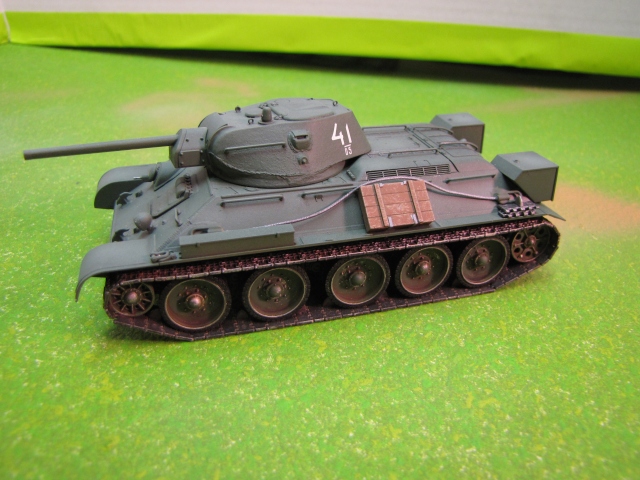 After the jump, a brief look at one of the best all around designs of the war.

In the late 1930s, as a result of several border fights with the Japanese, it had become obvious to the Soviets that they needed a new tank.  Like so much similar hardware, they worked with a variety of influences, including the excellent track and suspension system purchased from American engineer J. Walter Christie. This suspension system allowed for a smoother ride at higher speeds than any other such system in use in the world (yes, that means the US Army did not purchase this system.  Oops).  Using that as a start, the Soviets combined a well sloped armor scheme and the best tank mounted gun available (the “76” part of the type designation indicates the high velocity 76 mm gun).  The new tank was also engineered to be rugged and reliable.

I love the way the turret is molded on this kit, it captures how crudely cast the original was.

The boxes on the back are extra fuel tanks. They could be jettisoned in an emergency.

The T-34/76 was just entering service when the Germans launched their invasion in June of 1941.  It came as an ugly surprise to them.  Even though Soviet tank tactics were initially poor, it was obvious this new hardware was first rate.  The Germans found the T-34 to be superior to anything they were currently using.  This led to a newer and bigger German tanks, like the Panther and Tiger; which of course meant a Soviet response with the T-34/85 and IS-2… 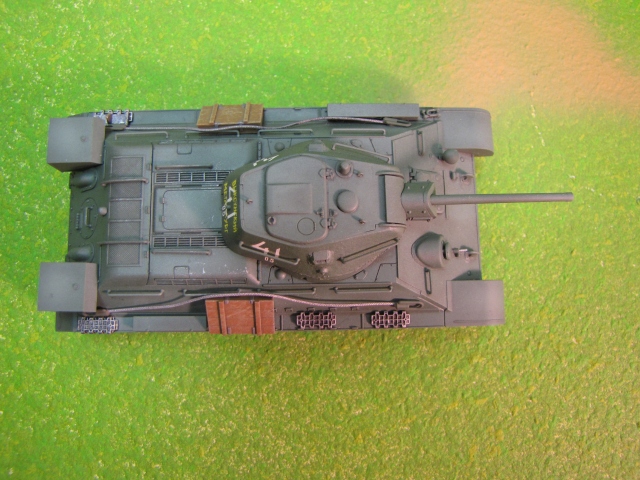 The T-34 is generally considered the very best medium tank of WWII.  As a medium, it would be compared to tanks like the Panzer IV, Panther and Sherman.  Each of those tanks has features of merit; but the T-34’s balance of speed and agility, thick armor and an excellent main gun make it the stand out.

T-34 and Panzer IV. Two similar tanks in size and capability. The gun on the Panzer looks bigger than it is because of the muzzle brake at the end.
Look how much lower profile the T-34 is, and its thicker tracks allow for better cross country performance.
Also the well slopped armor means its less likely to catch a shot square than the Panzer is.

This example is from the Tamiya kit.