An excellent British tank of the later War years, the Cromwell is perhaps less well known than much hardware of the Western Europe Campaign.

Let’s take a look at a very useful design.

I’ll have to start by admitting the whole development process of British armor is a bit bewildering to me (not that American armor makes a great deal more sense!).
The Cromwell was a cruiser tank, that means it was designed for speed and mobility; breakthrough operations as opposed to infantry support. As a later wartime design it benefited from a lot of practical experience, but at the same had many cobbled together features.  The first big difference from previous cruiser tanks was reasonably heavy armor, three inches in front.  That’s about 50% more than a Sherman, with a lower profile.  But the armor was in vertical slabs with no angle, which made for roughly equal protection (the Sherman had a better chance of deflecting hits, while the Cromwell was more likely to be hit square).
But that extra armor means extra weight, and a reliable, powerful engine initially posed a problem. Working from a damaged Merlin, with no supercharging and other changes to facilitate tank use, the Tank Board came up with the Meteor engine.  This was rated at about 600 hp, which meant plenty of reliable power.  Many early production Cromwells would get Meteor engines rebuilt from Merlins, until Rover was contracted to deliver new-build engines.  The powerful Meteor could push the 27 ton tank up to 40 mph.
The gun was also problematic, the six pounder was originally intended but was no longer considered enough by forces in Italy.  The 17 pounder simply wouldn’t fit.  But British troops were mostly very happy with the American 75, especially since it had interchangeable armor piercing and high explosive ammunition.  The basic American gun wouldn’t quite fit either, but it was discovered that the 6 pounder could be bored out to fire the same ammunition.  This actually came to be considered a better gun than the American 75, with a better rate of fire and superior armor penetration. 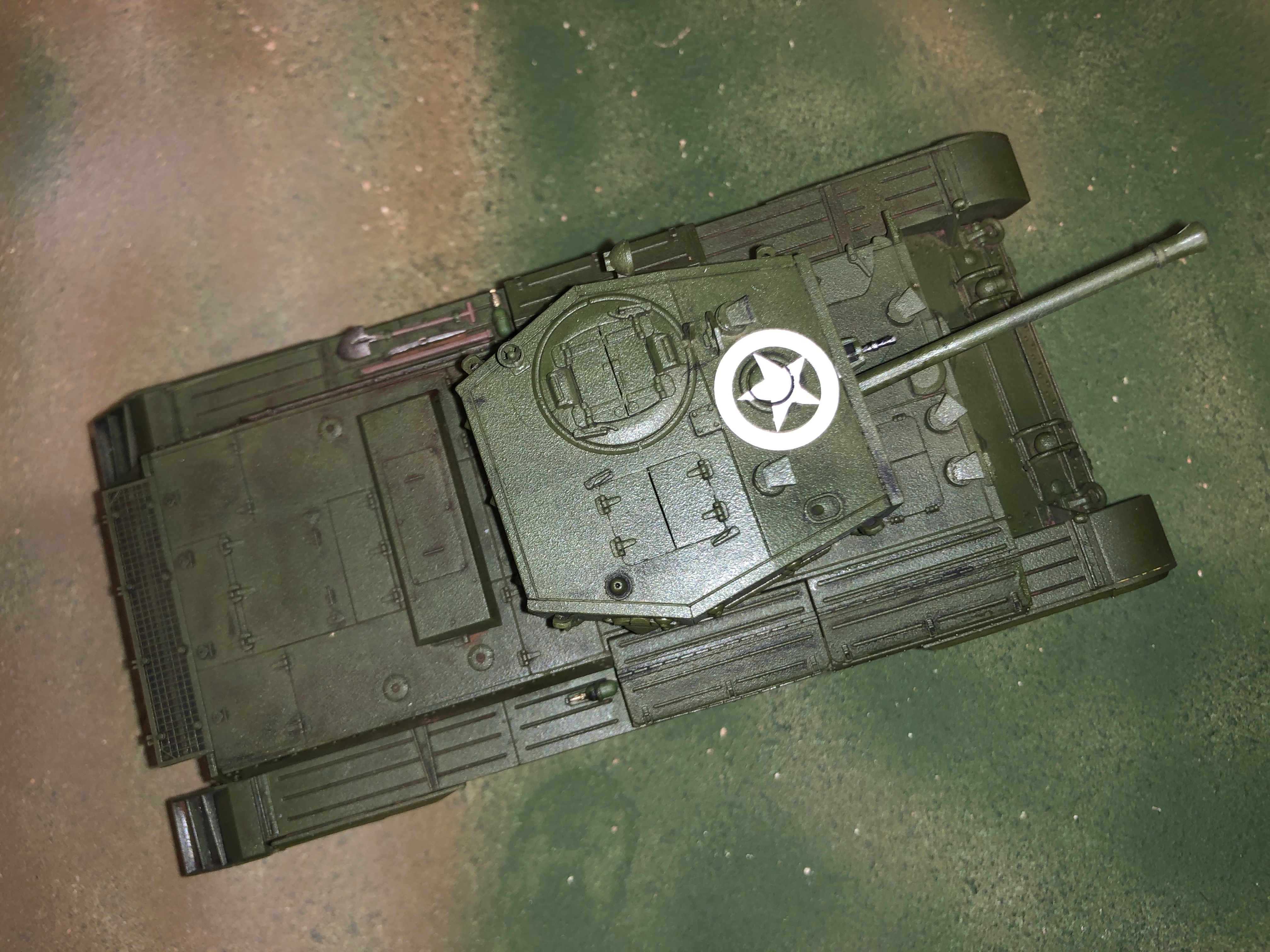 It entered service late in 1943, but didn’t see combat until Normandy.  It was used by six different divisions during the European Campaign, but I believe only the 7th Armored Division had it as the main tank in every Armored Brigade.  It was always backed up by Sherman Fireflys for heavy anti-armor support.  Overall it was rated comparable, or slightly superior to a Sherman or Panzer IV.  It was obviously faster than either, with good armor and a good gun.  Its only real knock being lower mechanical reliability; road tests showed it required slightly more than twice the service of a Sherman, but that’s still considered good performance.

Late in the War, a larger redesign of the Cromwell with the 17 pdr entered service as the Comet.

This particular tank served with the 7th Armored Division, Summer 1944.  It is from the Tamiya kit.

I'm 5o-something years old and live in Ypsilanti, Michigan. I'm happily married to Jodie. I was an air traffic controller for 33 years and recently retired; grew up in the Chicago area, and am still a fanatic for pizza and the Chicago Bears. My main interest is military history, and my related hobbies include scale model building and strategy games.
View all posts by atcDave →
This entry was posted in Armor, Britain and tagged Scale Models, Tank Models, World War II. Bookmark the permalink.