Another of the ubiquitous armored cars employed by every military in World War II. 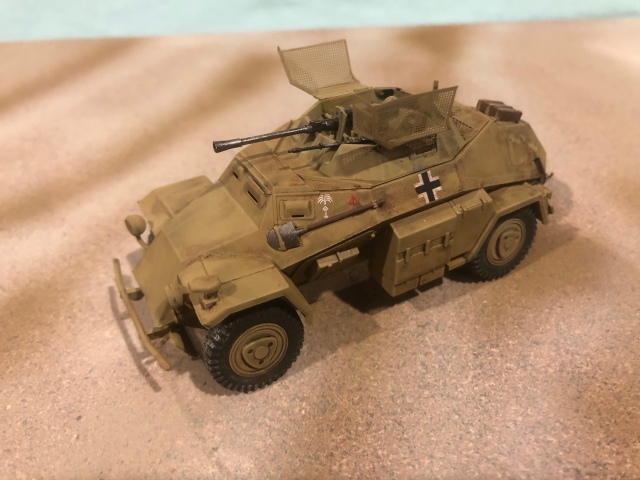 Let’s take a look at a more or less “typical” piece of hardware.

Going back to the early 1930s, one of the first things the Wehrmacht looked at as part of expansion and modernization was armored cars.  Of course such vehicles had served broadly in the First World War, and were tank precursors in a way.  But armored cars remain popular after the advent of heavier armor both as a speedy choice for recon, and more broadly as cheap armor.
The first mass produced design was derived from the Horch family of trucks.  The Sd.Kfz.221 was a two man vehicle with a single light machine gun in a small turret and 4 wheel drive.  The Sd.Kfz.222 was an enlargement of that design, especially the turret.  It was a three man vehicle, with the commander and gunner functions separated.  With a 20 mm cannon and co-axial light machine gun, even the enlarged turret was a little cramped.  It was open topped for better visibility, but an anti-grenade cage could be closed up for close quarters fighting. 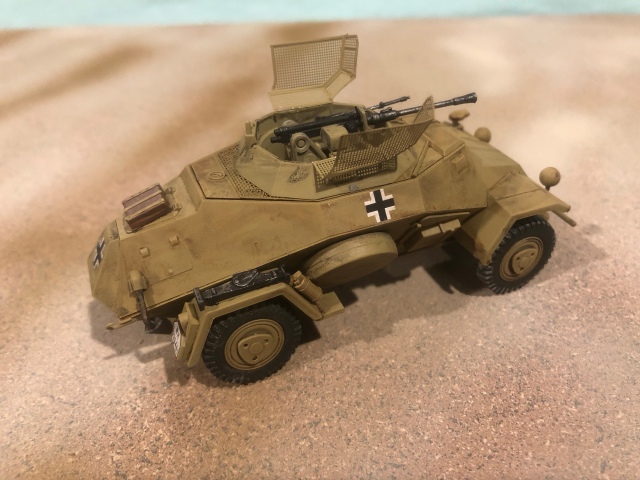 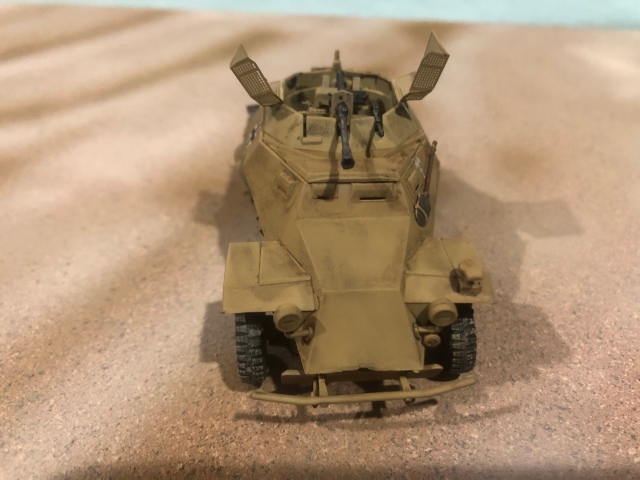 The 20 mm gun and 7.92 mm machine gun are co-axial mounted in the turret. The clamshell grenade screen can be closed up as a minimal sort of protection for close quarters fighting.  Helps against grenades, not against Molotov cocktails…

The Sd.Kfz.222 entered service in 1937 and served everywhere the German Army went to the end of the War.  Nearly 1000 were built by 1943.  It was a key part of Reconnaissance Units throughout throughout the War, although North Africa and Russia exposed its weakness with a less developed road network.
From 1941 a reconnaissance version of the Sd.Kfz.250 half-track was considered its replacement (with more room and better off road capability), but this was not a high priority and the older model remained in service to the end. 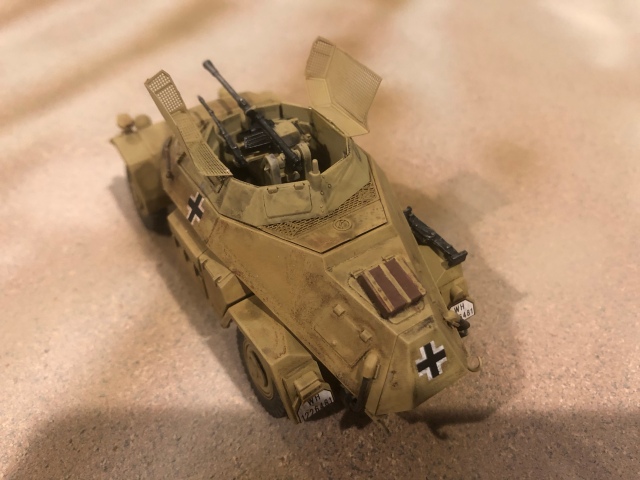 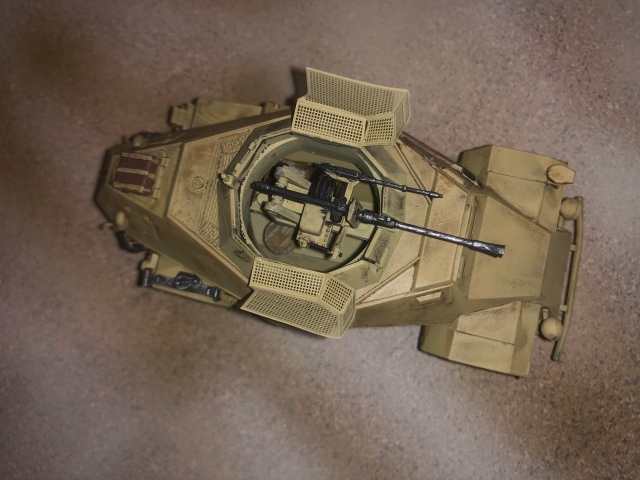 This particular vehicle served with the Afrika Korp in 1941.
It is a Tamiya boxing of an ICM kit.  Which was interesting.  It was basically all ICM including photo-etch and decals (very unfortunate on the decals!), except one sprue of Tamiya miscellaneous detail parts.  It was interesting to look at the difference.  Although the ICM kit is well engineered, fit together well, and really looks great I think; but the Tamiya parts clearly have better detail and quality of the mold.  Its really striking, especially on parts like the jack that are included by both brands.  But in some cases the directions have you performing some silly surgery to remove the part of the Tamiya part you need…   I generally found it better to just use the ICM part.  Clearly the detail sprue was not actually designed for this kit.
Tamiya does this on occasion, they have some marketing agreements with ICM and Italerie (maybe others?). They’re not hiding anything, the box is plainly labeled “parts by ICM”.  I imagine it has something to do with distribution networks.  But for what its worth I would say check availability of both brands, I strongly suspect if I’d looked harder an ICM boxing would have been available in the US for cheaper. 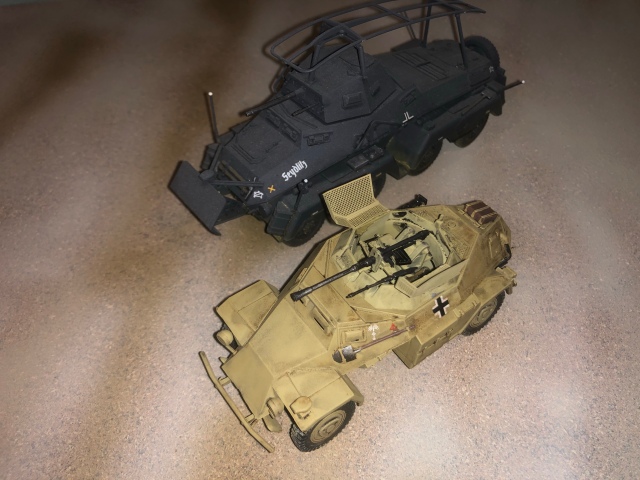 German Recon Units would have often included both Sd.Kfz.222 and the much heavier Sd.Kfz.232. 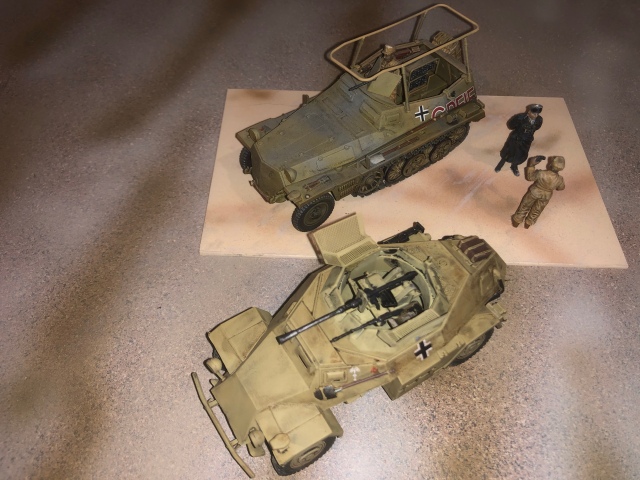 Early in the War it was decided to replace the Sd.Kfz.222 with the Sd.Kfz.250 half-track.  The half-track was roomier and had better off road capabilities.  But complete replacement never happened. 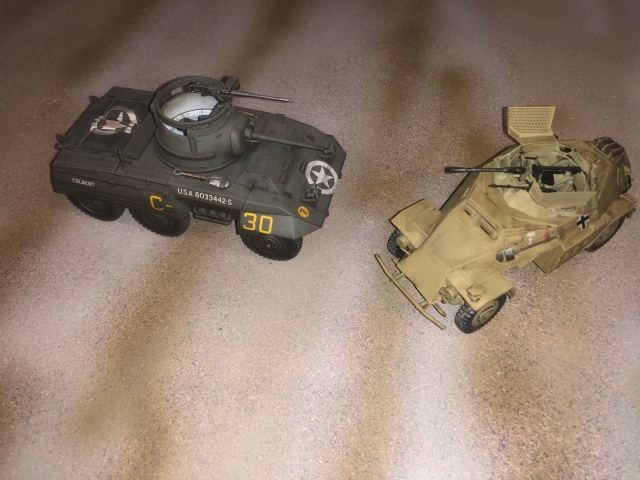 The M8 Greyhound is perhaps a similar American vehicle.  Although the Greyhound is more modern (by a couple years) and heavier.  And no, it was not used where the roads were lousy.

I'm 5o-something years old and live in Ypsilanti, Michigan. I'm happily married to Jodie. I was an air traffic controller for 33 years and recently retired; grew up in the Chicago area, and am still a fanatic for pizza and the Chicago Bears. My main interest is military history, and my related hobbies include scale model building and strategy games.
View all posts by atcDave →
This entry was posted in Armor, Germany and tagged Scale Models, World War II. Bookmark the permalink.