A reasonably successful effort to bring anti-tank capability to the Desert Air Force.

Let’s take a look at a late model Hurricane.

In early 1941 the Hurricane was the most used British airframe around the world.  The Mark II version, with the XX series Merlin engine, was entering service.  The Spitfire Mark II was a similar upgrade, but Spitfires would primarily be kept for home defense for quite some time.
A new weapon was undergoing final development at this time.  A 40 mm auto cannon, actually two models by Vickers and Rolls-Royce. The Vickers “S” type would become the main gun produced.  This is the same size gun as the 2 pounder used by British tanks of the time.  With the auto-load and 15 round magazine it allowed for a lot of armor piercing shot from an aerial platform.  The Hurricane, with its good handling and rugged structure was a good fit for this gun.
The final sub-type of the Hurricane Mark II was designed to use this weapon.  It would carry a single auto-cannon under each wing, and have a .303 machine gun in each wing to help aim the heavy guns.  Obviously this outfit meant this Hurricane had virtually no air-to-air capability; so for the first time, Hawker’s fighter was not a fighter.  Over 300 lbs of armor was added to engine, radiator and cockpit to improve survivability at low altitude over the battlefield.
294 of this sub-type were built.

The 40 mm auto-cannon led to the Hurricane IId’s nickname, The Flying Can Opener

The majority of those built were sent to North Africa.  No. 6 Squadron was the first to use it in combat in June 1942.  They were very successful in the fighting withdrawal that ended at El Alamein, Egypt.  More squadrons re-equipped with the type and it was viciously effective in October during the second Battle of El Alamein and subsequent drive across North Africa.   At this time the Desert Air Force was getting very innovative in its use of close support, often setting up desert air fields deep behind enemy lines so German and Italian forces could be hit from all directions at once or very deep into enemy held territory. 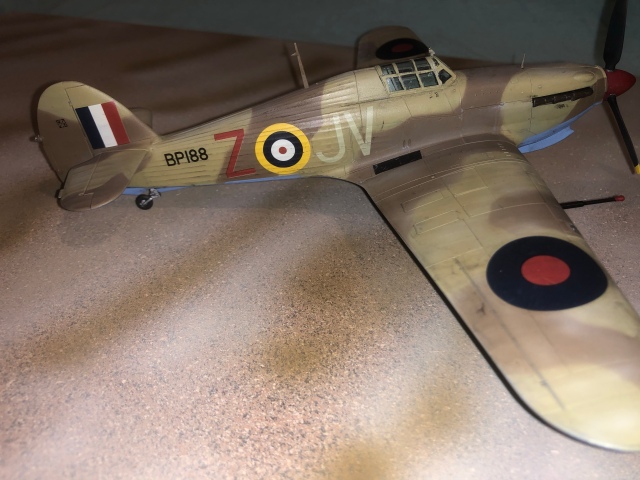 The Hurricane IId saw combat in both North Africa and the Far East.  But in Europe (North Africa, Mediterranean, Italy), No. 6 Squadron remained the type’s biggest proponents; using it until May 1944.  At that point they re-equipped with the last version of Hurricane, the Mark IV.  They were the only British Hurricane Squadron in service to the end of the War.

The 40 mm Vickers S is about the same size as the 2 pounder on the Matilda.

This is a No. 6 Squadron Hurricane Mk IId in North Africa, late 1942.
The kit is Hasegawa.  It is really a nice kit, that gets some criticism for the parts breakdown so any version of Hurricane can be built from the same basic molds.  I mostly have no problem with that, with care I get a level of fit I’m happy with (yeah, yeah, I won’t win any contests…   don’t care…).  But oddly, and this isn’t the first time had this issue with this kit, I find it really tricky to get it to sit level.  The gear struts look like they’re seated correctly, but they still come out at slightly different angles.  I can photograph it so this flaw isn’t too glaring, but it jumps out when you look at it square on.  Frustrating, but not a huge big deal.
The decals were one of the oldest sets I hadn’t used yet from Ministry of Small Aircraft Production.  The sheet had yellowed some, but I think they performed well enough.  Better than Hasegawa’s own decals did (I used some kit decals for stencils. For a quality company, Hasegawa sure has problems with decals!)

Intended prey of the Flying Can Opener.  Anything enemy that rolls or crawls.  Well, probably not heavy armor.

I'm 5o-something years old and live in Ypsilanti, Michigan. I'm happily married to Jodie. I was an air traffic controller for 33 years and recently retired; grew up in the Chicago area, and am still a fanatic for pizza and the Chicago Bears. My main interest is military history, and my related hobbies include scale model building and strategy games.
View all posts by atcDave →
This entry was posted in Anti-Tank, Britain and tagged Aircraft Models, Scale Models, World War II. Bookmark the permalink.