The most effective version of Sherman against German heavy armor was a British modification. 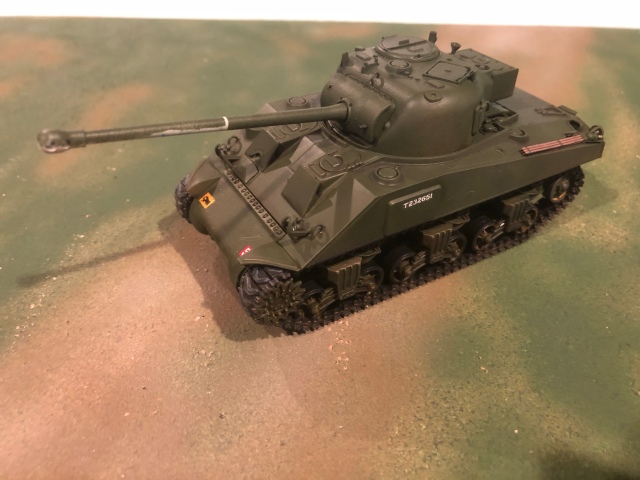 Let’s take a look at the Firefly.

The Sherman was a capable enough medium tank. But through 1943 it became obvious a bigger gun was needed against certain opponents.

The British 17 pounder (3 inch or 76.2 mm) was the best anti-tank gun in use by the western Allies.  It could even defeat a Tiger or Panther from any angle at over a kilometer.  I’ve seen it rated as better than the standard German 88 but not quite as good as the 88 mm Pak 43 (used in King Tiger, Jagdpanther, Elefant).
The initial plan was to mount the 17 pdr on the next generation of British tanks.  But both advanced vehicles, Challenger and Cromwell had development issues (Ultimately the Cromwell got an improved 75 mm gun, that was slightly less capable than the 17 pdr).  And by late 1943 it was obvious something was needed quickly; especially when it was realized in Italy that the Panther was becoming a standard medium, not just a special heavy like the Tiger.  The Sherman was the biggest tank, with the biggest turret ring of anything in wide use. But mounting the 17 pdr on a Sherman was not a decision arrived at lightly.  The Army’s Ministry of Supply wanted it on a British tank, not something Lend-Leased.  So that’s where official work was done for quite some time.
Major George Brighty of the Royal Tank Regiment wanted something quicker and started his work on mounting the gun to a Sherman.  Even though its ammunition diameter only slightly exceeds other Sherman guns, the barrel length is much greater and the recoil is an impressive 40 inches.  That recoil is simply too much for a standard Sherman turret.  Brighty first came up with a fixed mount, that is no recoil on the gun, that transmitted the shock through the whole tank.  But this drastically increased wear on brakes, suspension and transmission.
Brighty was joined by another officer, Lt Col George Witheridge who came up with the idea of a new recoil mechanism that transmitted the force to a sideways mount to take advantage of the Sherman’s wide turret.  At about this time the Army ordered them to cease and desist…  in the vast wisdom of higher ups who aren’t operational.
Fortunately for all concerned, Brighty and Witheridge were able to appeal to some higher ups with Africa experience who ultimately got the decision reversed and this finally led to official interest. 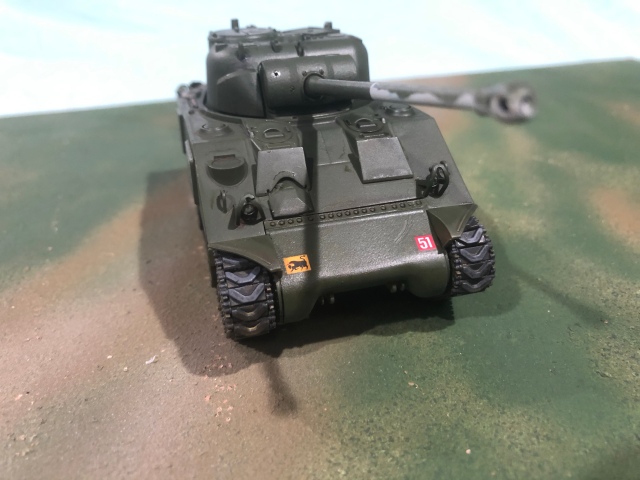 The grey paint on the barrel was a sort of camouflage applied after the Germans began singling out “long barrel” Shermans.  In many conditions it does make the gun look shorter.

The conversion was more complicated than the American 76 mm gun was.  In fact, the 17 pdr was specially produced for weight and balance reasons specific to the Sherman, a new mantlet was needed, radio equipment had to be removed from the turret and a new armored bustle was designed for radios further back, and the bow gunner’s position was removed for additional ammunition storage (the 17 pdr round was much longer than other weapons’).
Initially all Shermans converted to the new standard were Sherman Mk V (M4A4) with the standard 75 mm gun.  But when new deliveries switched over to the 76 mm gun the Army decided to convert older Sherman Mk I (M4).  In British Army nomenclature the 17 pdr was coded by a capital “C”, so the re-manufactured tank was listed as a Sherman VC or IC.  The nickname “Firefly” was soon attached because of the large muzzle blast from the gun.  Gunners and commanders were trained to blink when firing to avoid being blinded by their own gun.  A number of M10 Tank Destroyers were similarly modified with the 17 pdr and were also, often called Fireflys. 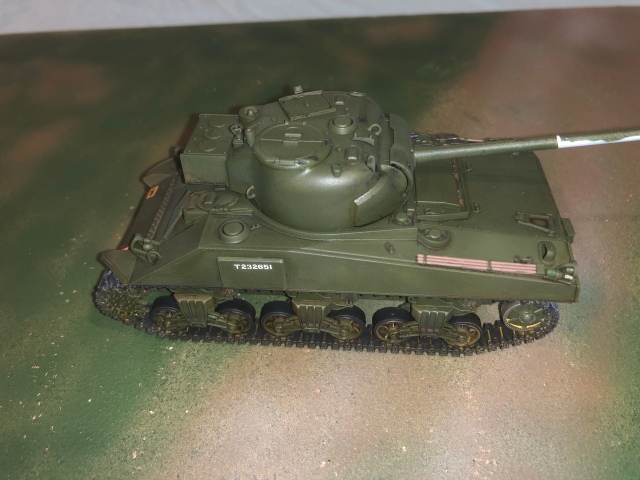 For normal driving the turret was faced aft.  This avoided embarrassing accidents of wrapping that long barrel around a sneaky tree or lamp post.  There is also a travel lock at the far left rear of the upper deck.  This is to take the load off the gun’s transport mechanism during long road trips.

Some 2200 Shermans were modified as Fireflys.  By D-Day armored Divisions and Regiments had one Firefly for every four regular Shermans or Cromwells (units equipped with Churchill Tanks had a similar number of M10C Fireflys).  The tanks with other guns were retained because there was no high explosive ordnance for the 17 pdr.  In most cases the standard tanks would advance and combat soft targets while the Fireflys maintained over watch.  They trained in a highly mobile form of over watch because of the Firefly’s tendency to ignite its surroundings when firing.
It didn’t take long for the Germans to realize that the new “long barrel” Shermans were by far the greatest threat to their heavy armor and make them the priority target.  Being a Sherman it was never the most heavily armored AFV on the battlefield, so getting the first shot was important.

Progression of common wartime tank guns.  See the two pounder (40 mm) on the Matilda in front, a six pounder (57 mm) on the Crusader and the 17 pounder on the Sherman

Several battles after D-Day showed how decisive Fireflys could be.  When the Germans launched a counter-attack with 12 Panthers on the village of Norrey-en-Bessin there were 9 standard Shermans and a Firefly defending.  The Firefly, commanded by Lt GK Henry. knocked out five Panthers with six shots.  The remaining Shermans got two more in the successful defense of the village.
Similar shooting from a Firefly commanded by Sgt Harris of the 4th/7th Dragoon Guards destroyed five Panthers with five shots during Operation Perch.
Perhaps the best known success was on August 8, 1944. During Operation Totalize a German counter-attack involving Tigers was defeated by ambush.  One Firefly, commanded by Sgt Gordon, knocked out three Tigers.  This skirmish also led to the death of Michael Wittmann, the feared Tiger commander who had previously held off an entire British Armored Division with only his own tank. 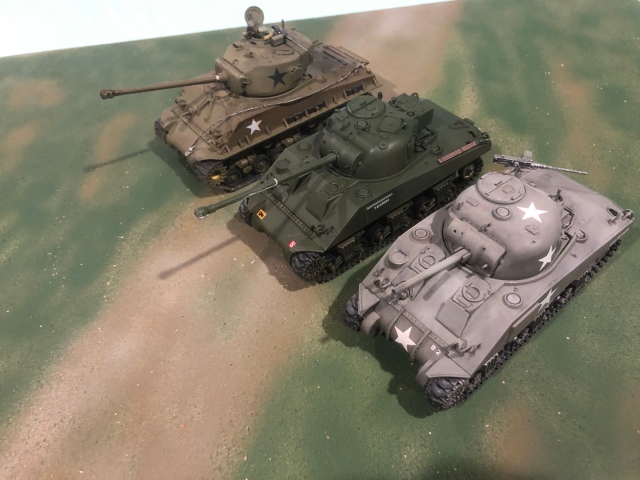 Sherman family photo.  The basic M4 (Sherman I) is right front.  The Sherman IC is a modification of this.  The M4A3E8 in back shows the final American version of the tank.

Interestingly the Firefly became less important in 1945 as German heavy armor became less common.  The standard tanks with their high explosive shells were more needed.  Many of the type’s “bugs” were never fully resolved as it was always viewed as an expedient. And of course post-War, the Ministry of Supply finally got their way with a more British tank to carry their prized gun.

The Panther and Tiger are the two tanks the Firefly was meant to counter.  Its gun was superior and could defeat either with a single shot.  Obviously taking hits was more of a problem.  But sound British tactics (put the non-Fireflys in front!) meant they actually had a lower loss rate than other allied tanks.

This particular example is a Sherman IC attached to the 11th Armored Division.  My information only tags it as 1944, no specific dates or engagements listed.  Most Fireflys were VC models.  But this is one of those limitations of scale, its the Tamiya kit and a modification of their basic M4 kit.  Since they never did (or haven’t yet!) an M4A4 there is no Sherman V.  Obviously not a huge deal, except I believe those famous battles around Normandy were mostly fought by Sherman VCs, with the IC coming in later as replacements.

I'm 5o-something years old and live in Ypsilanti, Michigan. I'm happily married to Jodie. I was an air traffic controller for 33 years and recently retired; grew up in the Chicago area, and am still a fanatic for pizza and the Chicago Bears. My main interest is military history, and my related hobbies include scale model building and strategy games.
View all posts by atcDave →
This entry was posted in Armor, Britain, USA and tagged Scale Models, Tank Models, World War II. Bookmark the permalink.