Obviously the most famous Japanese fighter of World War II. The US military was abruptly introduced to the type on December 7, 1941.

Let’s take a look at a participant in that attack.

Of course I’ve looked at this type before, and you know I’ll build some more!  Faced with the same engineering math as aircraft designers around the world, Mitsubishi designer Jiro Horikoshi made some specific choices to meet the Imperial Japanese Navy’s criteria.  Starting with a top secret metal known as “extra super duralumin” that was lighter and stronger than other Aluminum alloys, and foregoing pilot armor and self sealing fuel tanks, he came up with a clean design that was fast, maneuverable and very long-ranged.
After several attempts to use one of their own engines, Mitsubishi finally gave in to Navy pressure to adopt a Nakajima Sakae 12.  This generated 940 horsepower and made the new plane best in its class for 1940.
The IJN was so pleased with the type’s performance they sent the first 13 pre-production aircraft to China before full testing was even complete.   It dominated the battlefield as few type’s ever have, at one point scoring 27 victories in three minutes with no losses.  Even if those numbers are inflated they show complete ascendancy (10 to 0 is hardly a worse ratio than 27 to 0!).
Observers in China mostly failed to convince outsiders that the type could possibly even be real, and US, British and allied forces played a heavy price for that disbelief from December of 1941.

On December 7, six aircraft carriers launched 350 aircraft in two waves against the Naval base and military installations on Oahu.  They inflicted massive damage to naval and air assets while loosing only 29 of their own.
There is no doubt they started a War they couldn’t win, but for the next six months it didn’t look that way.  The Japanese, their Navy in particular, looked nearly unbeatable for the opening moves. 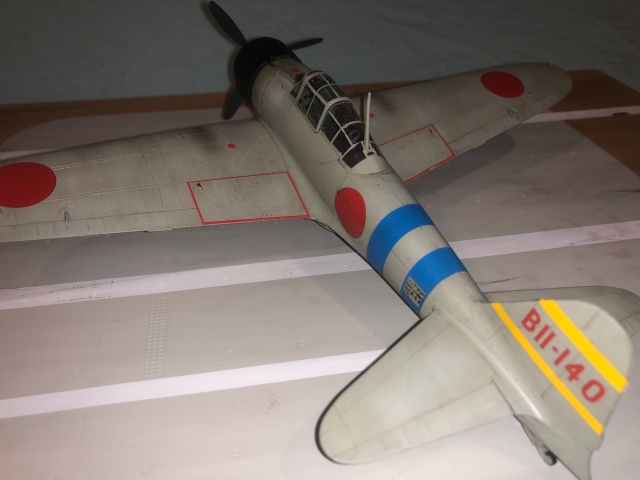 This particular aircraft was flown by Lt Sumio Nono of the carrier Hiryu. He was the leader of the 11th Section of the 4th Hikotai, and sadly I don’t really know what that means.  Except to mention IJN sections were three airplanes, and there is no way the Hiryu had 33 Zeros on board.  My semi-educated guess would be that the “4th Hikotai” is the entire Hiryu air group (The tailcode of Hiryu aircraft was “BII”. This indicates it was the second of two ships of the second carrier division. So maybe 4th air group?) The Hiryu launched 15 Zeros that day, six in the first wave and nine for the second.
Lt Nono led that second wave group of Zeros.  They were charged with suppressing Bellows field on the east side of Oahu.  So they would have shot down two P-40s that tried to take off during the attack and destroyed one B-17 that attempted an emergency landing there, in addition to shooting up many aircraft that never got off the ground. 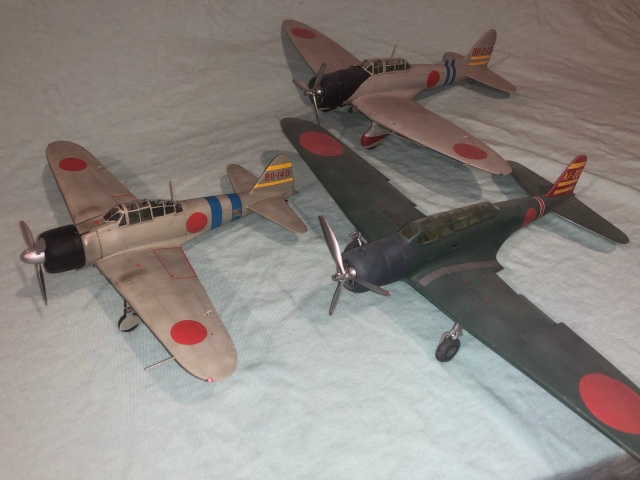 This is the Hasegawa kit with Eagle strike decals.  Both are excellent products.  This is also the first aircraft I’ve done all major painting with Tamiya paints.  For so many years I’d used Model Master, but with the demise of that brand I’m forced to change.  The Tamiya paints are excellent quality and I have no complaints with their mixing or application.  They really go down nice and smooth! Unfortunately they do not make a very complete selection of American or British colors, so I may be using multiple brands for a while (currently looking at “True North” paints for allied subjects, they mix and thin with Model Master/Testors).

Combatants over Hawaii.  This particular Zero would have fought two P-40s that departed Bellows Field.

Its been a couple years, but I finally have the major variants of Zero again!

Beautiful restoration of an A6M2 Zero.