Let’s look at the nocturnal air war and a weapon design for that purpose.

At the start of World War II darkness provided an effective protection for anyone venturing out.  The ability for defenders to locate an intruder was pretty limited.  It was only partly effective if skies were clear and the moon was full.
The flip side is, bombing anything was also extremely difficult.  When British Bomber Command began night missions their accuracy was so poor the Germans often could not even guess what city had been their target. The Germans fared slightly better against the British for a couple reasons; London was close enough to occupied Europe that the Germans could adapt commercial aircraft night aids to guide their bombers most of the way.  Secondly, if visibility was even partly good London has a distinctive location on a major river.  So the Germans could usually find what was then the world’s largest city. 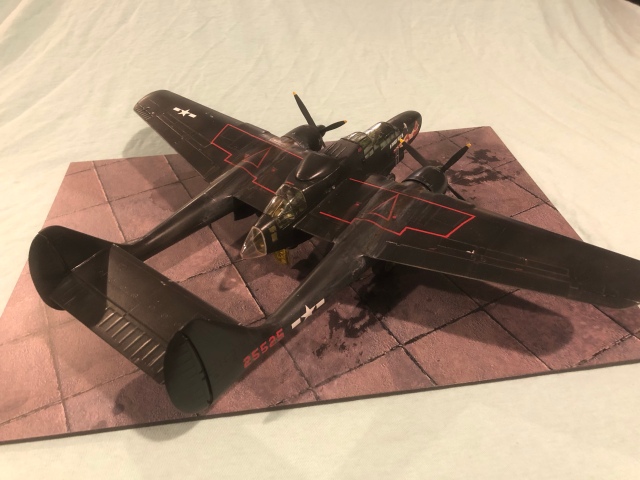 Of course we know World War II was the dawn of modern electronic warfare.  Britain and Germany both had defensive radar nets at the start (the British system was much better, but we’ll save that story for another day).  But big, ground based systems could really only guide a fighter to a general area; visual range by day.
What was needed was a smaller, more precise radar on an interceptor for guidance right to the target.   Something to fill that gap between daytime visual range and nighttime visual range (visual sighting was a necessity, WWII gunnery always involved seeing a target to shoot at it).
Just as the War started the British had developed a small airborne set that could be carried on a heavy fighter, specifically a Bristol Blenheim, a tactical bomber converted into a fighter.  The Germans had previously concluded it was impossible to make a radar this small which gave the British a nice head start.  But small is a relative term here.  The equipment was large and bulky enough that only larger aircraft, with extra crew to operate the thing could be used.  After the Blenheim, the British would use the Beaufighter and Mosquito as next generation night fighters.

Meanwhile in the United States, the US Army Air Force was following developments closely and even worked alongside British technicians.  Work was started on a specialized aircraft that could carry the latest and greatest radar, have adequate speed to chase down any intruder, and enough power to carry extra fuel or ordnance for a variety of mission types.
Northrop’s design became the front runner quickly, but it was a complex modern warplane that took time to sort out both as a high performance aircraft and an electronics platform.  The SCR-720 radar had a five mile range and could also serve as a navaid.  In short, this meant the P-61 had one of the most advanced and versatile electronic suites of any aircraft. 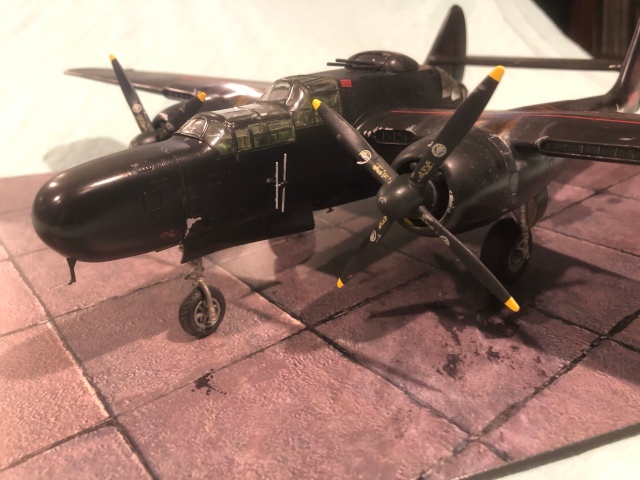 It first deployed to England in May of 1944.  This is fairly late in the War, and in spite of how advanced the Black Widow was there was by now several aircraft to fill the role.  In fact, American night fighter squadrons already in theater had been using the Bristol Beaufighter.  These crews in particular wanted to re-equip with Mosquitos, not Black Widows no matter how “advanced” their radar was.  It came to a contentious head in June of 1944 when 8th Air Force arranged a fly off between a Mosquito Mk XVI and a specially prepared P-61A.  The Black Widow both outran and out-turned the Mosquito at every altitude.
And skeptics have scoffed ever since.  The British could not produce enough Mosquitos for their own needs, and could not really refuse a request for a little “reverse Lend Lease”.  It seems likely the fix was in, and the Mosquito crew was in on letting the Black Widow win.
But regardless, the Black Widow was a capable and dangerous aircraft in the night skies.  Especially since they were mostly called on for night interdiction against troop movements and transportation.  With the Black Widows ability to carry a load, and the SCR-720s ability to track moving targets on the ground, it was almost certainly the best choice for this sort of mission.

The situation was a little different in the Pacific. The Black Widow didn’t play second fiddle to the Mosquito, but found itself outperformed in some parameters by Navy and Marine F6F-5N fighters.  This used a much smaller and shorter range radar, but that meant the comparatively small single seat fighter was much faster.  P-61’s did some of the same interdiction work they did in Europe, and flew many standing patrols through the night protecting major bases.  But in a few cases they proved unable to catch high speed intruders so the Marines were called in to deal with the problem.

Nose art by Sgt LeRoy F Miozzi.  He is responsible for much stunning nose art in 6th NFS.  Compare to his work on an earlier P-61A.

A new, much faster variant of Black Widow (P-61C) was entering production at the end of the War.  It had a powerful turbosupercharger that let the R-2800 engine produce 2800 horsepower.  It was 60 miles per hour faster than previous versions (430 mph) and could sustain speed and power at a broader range of altitudes.
Existing Black Widows at the Museum of the United States Air Force (Wright-Patterson Air Force Base) and Smithsonian (at Udvar-Hazey) are both “C” models.  A “B” is being restored to airworthiness at the Mid-Atlantic Air Museum (Reading, Pennsylvania).

Think of the Mosquito as a nighttime Spitfire, and the Black Widow as a night Thunderbolt!

This example represents a P-61B of the 6th Night Fighter Squadron on Ie Shima (off the coast of Okinawa) in the last summer of the War.
It is from the Great Wall Hobbies kit.  The kit is an improvement over the old Monogram kit that has been around forever, but maybe not a huge improvement.  In box, it looked beautiful and I was very excited to build it.  But fine detail and stunning presentation hid some fit and alignment challenges.  It IS an improvement, but its not first class quality (even if the packaging is!).
Decals were from the kit for stencils and national markings, but “Midnight Belle” specific (art, name, serial number) are from Zotz.  Excellent product, they look better and are easier to work with than the kit decals.

I'm 5o-something years old and live in Ypsilanti, Michigan. I'm happily married to Jodie. I was an air traffic controller for 33 years and recently retired; grew up in the Chicago area, and am still a fanatic for pizza and the Chicago Bears. My main interest is military history, and my related hobbies include scale model building and strategy games.
View all posts by atcDave →
This entry was posted in Fighter - Night, USA and tagged Aircraft Models, Scale Models, World War II. Bookmark the permalink.