Messerschmitt’s Bf 109 was one of a handful of types that was in service from the first day of World War II to VE Day.

No doubt it developed a great deal over that period.  Let’s take a look at the final variant to enter service.

The Bf 109G was the most produced, and I believe the best known late-War variant of the type.  But it was built by several manufacturers in a variety of sub-types.  The G-6 was mass built, the G-10 added power, a tweak to that became the G-10/AS.  From G-1 to G-14 there were a lot of changes. Each manufacturer also made some of their own changes.  And a staggering number of manufacturer and field modifications were cataloged.
Which makes for a complicated designation system and parts inventory. 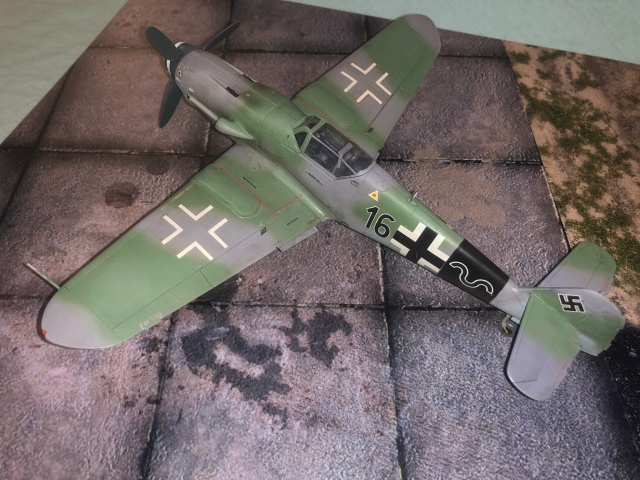 The black band around the rear fuselage designates the plane as a part of JG 53 during late-War “Reich Defense” operations.

The Bf 109K was an attempt to rationalize all of that.  With a focus on making a high altitude interceptor for opposing the US 8th Air Force, the best features were put together in a single spec.  This included a smooth cowling without the characteristic machine gun bulges, an “AS” type engine with water injection capable of nearly 2000 hp, and more aerodynamic air intakes under the wings and fuselage. I *think* the only feature unique to the Bf 109K was a retractable tail wheel and outer covers for the main landing gear.
This all made it the fastest and best climbing variant of the well known fighter.  Well, excluding some test aircraft (!).  As the “K-4” version it entered service in August of 1944 and continued until March of ’45 when all Bf 109 building came to an end.  It never fully replaced the “G” across all manufacturers, except to say it was the last type in production for the last couple weeks.  About 1500 of the K-4 were built.  A prototype for what would have been the “K-6” flew fall of 1944,  but I don’t believe that sub-type ever made it into production.
Whatever the Bf 109K’s virtues may have been, it was another of Germany’s too little, too late weapon systems.

The object hanging down on the wing is the outer gear-well cover. I believe this feature is unique to the Bf 109K.  Firepower is two 13mm machine guns and a single 30mm cannon firing through the propeller spinner.

A Bf 109G-6 alongside a Bf 109K-4.  The bulges forward of the cockpit on the “G” were added when the cowling mounted machine guns were upgraded from 7.92mm to 13mm.  On the “K” (and some “G” models!) the fuselage was flared out to remove the bulges and improve aerodynamics.

This particular aircraft was assigned to JG 53 in the closing weeks of the War.  It is from the Hasegawa kit.

In theory, the Bf 109 was to go after the escorts while more heavily armed and armored Fw 190s attacked the bombers.  But Goering and Hitler became strident on all fighters going after the American bombers.

High flying escorts like the P-51D shown here had become a major problem for the Luftwaffe.  The Bf 109K utilized all the best altitude and climb related features of the Bf 109 family.  It clearly had the best rate of climb of anything in wide use.