Supermarine’s famous Spitfire is best known as a fighter, yet from early in the War it also served as a reconnaissance platform.

So let’s look at a late War example of a photo-recon bird.

During World War II the Spitfire grew from Mk I to Mk XIX, and a few marks further after. Most were fighters.  Those familiar with the type will know it not only went through design growth but the designations of the changes are often bewildering.  The first PR version was a modified Mk I known as a “Type B”.  This is extra confusing because it did not use what was later called the “B” wing,  but a unique wing with extra fuel in place of armament that was later called the “D” wing.

Later PR types would usually receive their own Mark numbers, at least those medium/long range versions with the “D” wing did. 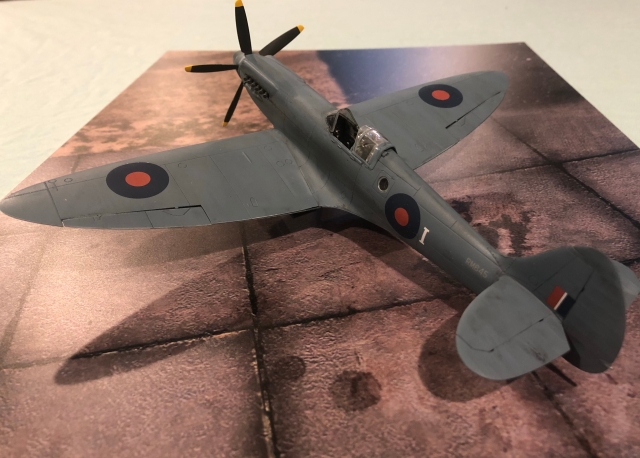 One of the camera installations is visible between the cockpit and roundel. Two more are located beneath the fuselage.

Another big change for type was the Griffon Engine.  This first flew in the Mk XII in August of 1942.  The engine offered greatly increased horsepower from a larger displacement that still retained about the same frontal area.  One pilot referred to the Griffon Spitfires as the “fire breathing monsters” of the family.  No doubt they were faster with high rate of climb.  Handling was compromised, and I’ve seen it said that these later Marks were less fun to fly; but they remained more maneuverable than any German opponent.  Griffon Spifires would never fully replace Merlin Spitfires, but were more of a specialist sub-type.

I love the view of that huge propeller in front of the huge engine!

The photo-recon types were deployed in small squadrons or detachments as needed.  Several were always based in England for working with the strategic bombers, both for target intelligence and bomb damage assessment.  This particular aircraft was from a detachment in Italy in January of 1945.

The Spitfire lines are still obvious from the Mk I to Mk XIX.

The PR XIX remained in RAF service post-War, and one example flew the last RAF Spitfire mission from Singapore on April 1, 1954.

This is the Airfix kit with Xtra Decal decals.  This is the first Airfix kit I’ve built as an adult.  It is a recent kit, and as such it is very well engineered with good fit and detail.  I have some issues with the quality of the plastic used, it is very soft which makes it easy to damage and prone to warpage.  I know the company has also had quality control issues, but I noticed no actual flaws with the molding on this kit.  I will look forward to more Airfix projects in the future.

Photo-recon Spitfires always flew unarmed, they could carry no guns. And early in the War they depended on their speed and altitude to return safely. But later in the War they often drew fighter escort, either Mustangs or Lightnings based nearby or even permanently attached to some of the bigger PR flights.

I'm 5o-something years old and live in Ypsilanti, Michigan. I'm happily married to Jodie. I was an air traffic controller for 33 years and recently retired; grew up in the Chicago area, and am still a fanatic for pizza and the Chicago Bears. My main interest is military history, and my related hobbies include scale model building and strategy games.
View all posts by atcDave →
This entry was posted in Britain, Reconnaissance and tagged Aircraft Models, Scale Models, World War II. Bookmark the permalink.