The I-16 had been mostly successful in the Spanish Civil War. But among its noted deficiencies was heavy firepower for close support work.

Join me for a brief look at an I-16 type designed for ground pounding.

The I-16 Type 10 had been the standard Soviet fighter through the late 1930s.  The Type 17 was mostly the same airplane, except the 7.62 mm wing machine guns were replaced with 20 mm cannon.  That made the airplane about 200 lbs heavier.  This impacted rate of climb and handling, but top speed remained a respectable 264 mph.  It obviously was not a great fighter in this loaded configuration, but the I-16 was obsolete in any form.

When World War II broke out in the East (Operation Barbarossa, June 22 1941) this version of the I-16 was one of the more numerous close support aircraft in the Soviet inventory.  The cannon were effective against medium and light German armor, and any soft skinned vehicle.  That means pretty much anything in use at the start of the campaign.

The I-16 Type 10 at left was the main Soviet fighter in the late 1930s.  The Type 17 was only a minor change with its 20 mm cannon.  I have seen that most Type 17s had the propeller spinner removed but I’m not exactly sure why.  I could guess it was because weight was more important than streamlining for this variant.

The Type 17’s biggest shortcoming was its limited ability to carry any additional ordnance.  That, and it clearly needed fighter escort which proved to be a weakness of the VVS (Soviet Air Force) throughout the early part of the War.  Through 1942 I-16 ground attack units were upgraded to Il-2 Shturmoviks with similar firepower but improved external stores and extensive pilot armor as quickly as the new type came available.

An I-16 Type 17 hooked up to a Huck’s Starter truck.  The Polikarpov, like most Soviet aircraft of this time, had no internal starter so the engine was cranked over by the starter truck’s attachment to the propeller. (from airpages.ru) 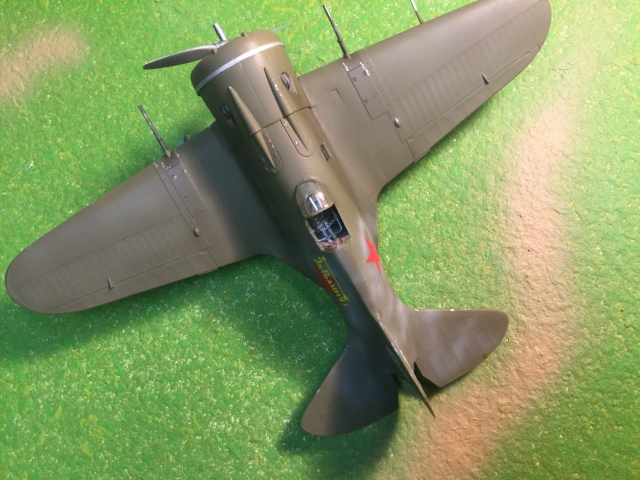 I love the look of those cannons in the wing.  They sure look big!

I wish I had a kit of Huck’s Starter Truck.

This is the Eduard kit and represents an aircraft that served on the Caucasus Front Summer of 1942.

I'm 5o-something years old and live in Ypsilanti, Michigan. I'm happily married to Jodie. I was an air traffic controller for 33 years and recently retired; grew up in the Chicago area, and am still a fanatic for pizza and the Chicago Bears. My main interest is military history, and my related hobbies include scale model building and strategy games.
View all posts by atcDave →
This entry was posted in Fighter, Soviet Union and tagged Aircraft Models, Scale Models, World War II. Bookmark the permalink.