Among the less well known, and more outrageously marked air forces of World War II was that of Vichy France. 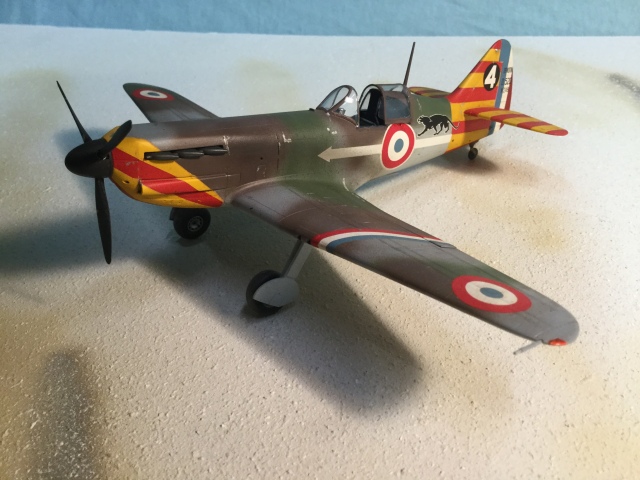 After the jump, I’ll take a brief look the role played by this combatant.

When France surrendered to Germany in June of 1940 the whole country didn’t just disappear.  In fact, Germany didn’t even want to be bothered with the more agrarian parts of southern France or the various colonies.  So a puppet government was left in place to rule these parts of France from the new capitol of Vichy.  No doubt this “country” was watched pretty closely by Nazi Germany and it was nominally an Axis power.

Of course the British now had some problems with this arrangement.  They didn’t want Nazi Germany to have control over certain French assets, ports and colonies.  So British and Vichy forces would clash several times from 1940-1942.  This situation continued until American and British forces invaded the French colonies in North Africa in November of 1942.  After some brief, and occasionally intense combat, Vichy forces surrendered and promptly switched sides back to the Allies.

This basically led to the complete collapse of the Vichy government.  The Germans took over the Vichy parts of France, while the colonies joined with the new Free French government that would fight the Germans.

During the time the Vichy government existed it was not a particularly enthusiastic partner to the Germans (yet they often did fight hard in their colonies against the British).  But one particular sore spot between Vichy and Germany was their air force.  The Germans didn’t really want a government they didn’t trust flying at all and initially meant to ground them entirely.  But when the British attempted to sink French naval vessels in North Africa to prevent their use by the Germans; the Vichy fought back and made a good enough impression on their German masters that were allowed a small air force.

This air force would remain small, and obsolete.  Germany started selling off many French assets to more trusted allies and Vichy had to scramble to keep a number of aircraft under their control.  Initially this was about 350 planes.  These were mostly newer types as of 1940, but with no provision for buying or building new hardware such types quickly became obsolete.  The D.520 was the best of the French Air Force in 1940 and equal to contemporary Spitfires and Bf109s.  But new models of Spitfire and Messerschmitt were deployed over the course of two years; while the D.520 was not only unchanging, but service aircraft were also wearing out.

A D.520 in full slave stripes. Its not uncommon to see these markings only partially applied.

The particular aircraft shown here is from the Tamiya kit with Aeromaster decals.  These markings were fun to do.  They were applied after several complaints from the Vichy government to the Germans about “friendly fire” accidents.  The Luftwaffe ordered these red and yellow stripes applied to nose and tail; Its been suggested these stripes were a sort of joke on the part the part of the Germans and constituted an airborne clown suit.  The French referred to them as “slave stripes” which is obviously fitting.  This plane was based in French Morocco in 1942.  It apparently did not fly against the American invasion (Operation Torch) in November of that year, it was likely grounded for mechanical reasons like much of the Vichy Air Force (I admit to choosing this aircraft purely for its full set of Vichy and unit markings).  But the Vichy did fight for a couple days, and I expect to eventually build several types that saw action.

I’m not sure how many Citroen sedans were actually in North Africa. But I know there was one, because I have a photo of it right here!

I'm 5o-something years old and live in Ypsilanti, Michigan. I'm happily married to Jodie. I was an air traffic controller for 33 years and recently retired; grew up in the Chicago area, and am still a fanatic for pizza and the Chicago Bears. My main interest is military history, and my related hobbies include scale model building and strategy games.
View all posts by atcDave →
This entry was posted in Fighter, France and tagged Aircraft Models, Scale Models, World War II. Bookmark the permalink.