A troubled design that did ultimately prove effective, the Curtiss Helldiver was the last dedicated Dive Bomber to see service with the US Navy.

Join me for a brief look at an interesting bit of naval history.

Perhaps the most revealing bit about this airplane is its nicknames; often called “The Big Tailed Beast” or just “The Beast”.  Its official SB2C designator was said to stand for “Son-of-a-Bitch, Second Class”.  It had numerous handling and structural problems; both air and ship crews disliked it; Britain, Australia and the US Army Air Force cancelled substantial orders; its problems triggered a congressional investigation and may have led to the ultimate demise of Curtiss.

The rear gunner’s station had twin .30 machine guns. The original spec called for a .50 in a power mount; but since Curtiss could not make a mount at an acceptable weight the twin .30s were found to be more manageable in a free mount.

The origins of the troublesome Beast go back to just before World War II.  The Navy was looking for the next generation of carrier bombers to be powered by the new R-2600 engine.  This meant a Torpedo Bomber to replace the TBD Devastator and a Dive Bomber to replace the SBD Dauntless.  The new aircraft were not only meant to be more powerful, but should carry heavier loads, farther and faster.  They would have modern electronics, pilot armor, self sealing fuel tanks, folding wings and a power turret for a defensive .50 machine gun.  Grumman delivered the TBF Avenger on schedule that met all design requirements.

Perforated dive flaps. The hint of red that’s visible is because the inside surfaces of the flaps are red; this makes it obvious to following aircraft when the lead has opened dive flaps. The original dive flaps were solid and caused nearly unmanageable turbulence; but the perforations seen here made things work like they were supposed to.

Curtiss struggled.  That’s putting it nicely. The prototype had difficult handling characteristics, was structurally weak, and its dive flaps generated turbulence that caused buffeting and made aiming in a dive extremely difficult.  Curtiss and the Navy gave up on the power turret requirement.  Only Grumman ever provided a turret that was not grossly over weight.  The Helldiver was actually shorter ranged than the Dauntless it was replacing. The Avenger entered service in June of 1942.  The Helldiver, after a series of over 800 modifications, entered service in November of 1943.  But it replaced the Dauntless only gradually.  As late as The Battle of the Philippine Sea (June, 1944) two fleet carriers were still operating the Dauntless; supposedly in one case the ship’s captain had refused to leave port until his bombing squadron was re-equipped with the older Dauntless.

Several items of note on the underside. The Helldiver had an enclosed bomb bay and interchangeable types of displacement gear so different types of bombs could be carried and thrown clear of the propeller in a dive. The plane also has external bomb racks and rocket stubs under the wings. The most outboard gadget (visible in the national insignia) is a Yagi Antenna for VHF navcom. This was invented by Shintaro Udo of Tokyo Imperial University in 1926. The design was purchased by the United States, Great Britain and Nazi Germany. Apparently the Japanese military had never heard of it until they captured examples early in World War II; and even after interrogating captured technicians, did not recognize the “Yagi” as having a Japanese origin.

But the Navy was committed to the change; production orders for aircraft and parts had been made and the Dauntless line was shut down.  The Helldiver did serve with increasing effectiveness to the end of the war.  It was faster, it carried a heavier bomb load and had heavier fire power. Its folding wing was a feature its predecessor never had which meant The Beast took up less deck and hanger space.  And important changes were made.  The four .50s in the wing were replaced by two 20 mm cannon.  New dive flaps and an enlarged/strengthened tail section eliminated early problems.

Late war American carrier aircraft. Particularly notice the TBF Avenger (top) which was ordered at about the same time as the Helldiver. The Avenger and Helldiver were of broadly similar size and performance, but the Avenger was ready a year and a half earlier.

The Helldiver and Avenger both were replaced quickly at the end of the war as the new AD Skyraider with a huge R-3350 engine was entering service. 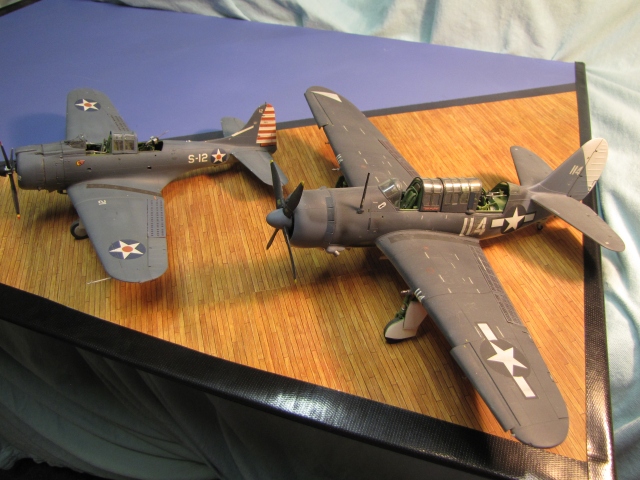 The Helldiver with the aircraft it replaced, the SBD Dauntless. The Dauntless was much loved for its maneuverability, toughness and dependability. The SB2C-4 (shown here) was the first version of the Helldiver that was completely “debugged” and mission capable. But it was never loved like the Dauntless had been.

This is the Pro Modeler kit.  It represents an aircraft that served on the USS Yorktown in summer of 1944.  I believe this is the oldest build still in my collection; my wife gave me the kit for Christmas of 1997 and I built it shortly after.  I can’t imagine her ever giving me another model (er, I have just a few unbuilt…)

The subject aircraft over home base