As the war in the East unfolded, the Luftwaffe found the need for more specialized, and more capable ground attack aircraft.  Especially as the Stuka was proving more vulnerable to Soviet fighters. 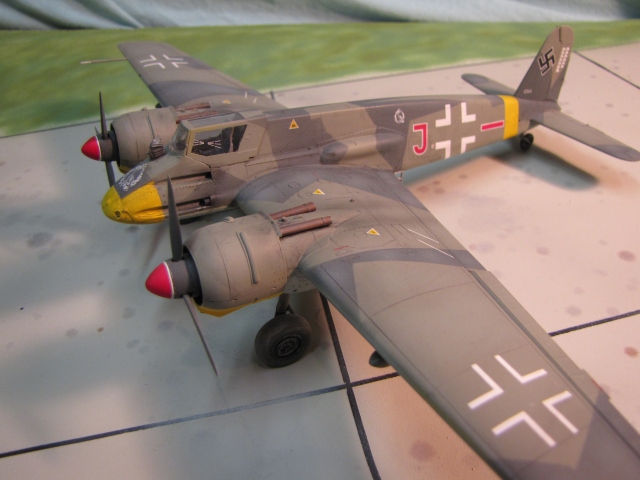 After the jump, a look at a mid-war tank buster.

The Stuka’s biggest shortcoming was its vulnerability to enemy fighters and anti-aircraft fire.  As early as the Spanish Civil War the Luftwaffe recognized it wasn’t the ideal weapon for every ground attack mission, especially for deeper penetrations into supply and transport areas.  So work was started fairly early on a new generation of supplemental attack types. After the fall of France a specific order went out for a type that used engines not in use on any other aircraft, that was armored against small caliber ground fire, had heavy firepower and a light bomb load.

Henschel and Focke-Wulf both submitted designs that were ordered as prototypes.  Both were found inadequate on several levels, but the Henschel design was smaller and cheaper, so further test aircraft were ordered.  It was soon obvious the original engines were underpowered, so a switch was made to Gnome-Rhone engines (700 HP) made in occupied France.  This finally gave the type acceptable power and performance and led to production orders as the “B” model.

A nice view of the armored nose section. The gun sight is outside of the cockpit. The troughs on the side of the nose are for the permanent armament. The large 30 mm anti-tank gun is visible beneath the nose. The main difference between the B-1 and B-2 version of the plane was if it mounted a Mk101 or Mk103 cannon. This is the later version which had a much higher rate of fire.

The Hs129 featured a small, lightly armored cockpit.  The pilot was seated in a steel tub with a triangular cross section to enhance protection.  Glass was 75 mm thick.  The pilot also sat well forward for good visibility.  The cockpit was so tight that engine instruments were mounted outside on the engine covers.

The “B” version was well armed with two light machine guns and two 20 mm cannon.  Most also had a 30 mm anti-tank gun in a gondola under the fuselage.  This made them reasonably effective tank and vehicle killers.  Less than 1000 were built, but they saw service with the Luftwaffe, Hungary and Romania.

The Infantry assault badge was worn on this plane’s nose to signify its commitment to close support work. The lines on the cockpit glass are a visual aid for calculating attack angles.
Also notice the engine gauges on the engine fairing just forward of the wing.

Like other axis bomber and attack types the Hs129 was replaced by modified fighter types that were less capable as pure ground attack aircraft, but were more survivable once the axis lost air superiority.  Apart from that loss of air superiority, the type’s main deficiencies were a fairly short range, which limited its ability to penetrate very deep into enemy territory; and the unreliability of its engines (being made in an occupied country by forced labor).

The Hs129 was never meant to replace the Ju87. They filled slightly different roles; precision dive bombing and heavy assault.

The pilot in snug quarters!

This aircraft is from the Hasegawa kit.  It represents an aircraft that served in Russia in 1943. 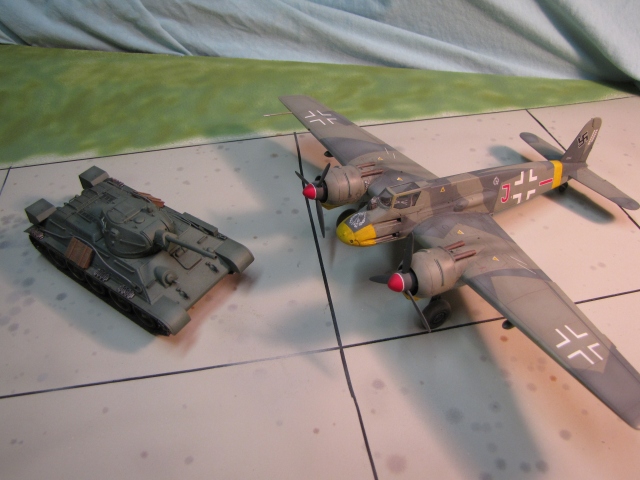 I'm 5o-something years old and live in Ypsilanti, Michigan. I'm happily married to Jodie. I was an air traffic controller for 33 years and recently retired; grew up in the Chicago area, and am still a fanatic for pizza and the Chicago Bears. My main interest is military history, and my related hobbies include scale model building and strategy games.
View all posts by atcDave →
This entry was posted in Anti-Tank, Germany and tagged Aircraft Models, Scale Models, World War II. Bookmark the permalink.