After the jump, a look at a Chinese fighter from 1939.

In 1937 China was simply not as modern as Japan.  In no sector could its industries compete.  So China sought foreign aid.  The first to help was Germany, who was starting serious modernization and was happy to have another proving ground apart from just Spain.  But in 1938 Germany and Japan signed the “Anti-ComIntern Treaty”.  This was a friendship treaty between Germany and Japan, that identified the Communist International Party as their common rival.

So suddenly the Soviet Union had common cause with China, and they pledged aid.  This climaxed with the Nomonhan War of 1939; in which Soviet armor proved its superiority to Japanese, but the Japanese Army Air Force exposed the fatal obsolescence of the VVS (Soviet Air Force).  Unfortunately for China, the Soviet Union and Japan signed a non-aggression treaty in 1941, which left them scrambling for aid once again.

So when Claire Chennault was hired by China to form a new Chinese Air Force in 1941, he was replacing a Soviet one.  This had been known as the Soviet Volunteer Group.  Their peak strength, in early 1941 was over 800 aircraft including fighters, trainers, two and four engined bombers.  Half of these aircraft officially belonged to China.  Over 200 Soviet airmen died in this largely unrecognized war, and this would be the combat experience that served the Japanese so well at the start of the Pacific War.

The I-16 was the most numerous fighter with the Soviet Volunteer Group.  It did well initially, but as Japan deployed more modern types like the Ki-27 (“Nate”) and A5M (“Claude”) it became more obvious that newer types were needed.  This, combined with experience in the Winter War with Finland (Winter 1939/40) provided the intiative that led to MiG-3, LaGG-3 and Yak-1 being introduced right at the start of their war with Germany.

This is from the Eduard kit.  It is a simple kit, but fiddly in places, like the exhaust! 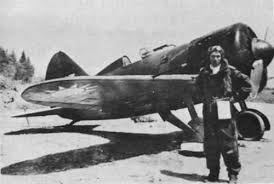 A pilot of the Soviet Volunteer Group in China.

I'm 5o-something years old and live in Ypsilanti, Michigan. I'm happily married to Jodie. I was an air traffic controller for 33 years and recently retired; grew up in the Chicago area, and am still a fanatic for pizza and the Chicago Bears. My main interest is military history, and my related hobbies include scale model building and strategy games.
View all posts by atcDave →
This entry was posted in China, Fighter, Soviet Union and tagged Aircraft Models, Scale Models, World War II. Bookmark the permalink.