The Grumman Skyrocket is a radical looking twin with significant pros and cons as a potential fighter.  In the years before World War II it was one of the more interesting designs considered in a rapidly expanding and modernizing fleet.

After the jump, a unique fighter prototype.

In the late 1930s, as the Wildcat and Buffalo were competing for a big production contract, Grumman and the Navy were already looking at the next generation of carrier fighter.  The much bigger twin-row radial engines (R-2600 and R-2800) were still in development, so Grumman decided to try a twin with the current R-1820 to get a dramatic increase in power and performance.

The steps on the fuselage, behind the wing, would retract along with the landing gear. Also notice the hook. Although the XF5F-1 never made a carrier landing, it was fully intended to do so.

Like the Army Air Force P-38 Lightning, the F5F Skyrocket was quite different from other nation’s “heavy” fighters.  The extra engine was not about load, it was about performance.  The Navy was also considering a liquid cooled engine (V-1710) in the Bell XFL-1 Airabonita (a navalized Airacobra), and work was starting on Vought’s XF4U-1 Corsair with the big R-2800.  Grumman too would hedge their bets by also offering an advanced single, the XF6F-1. 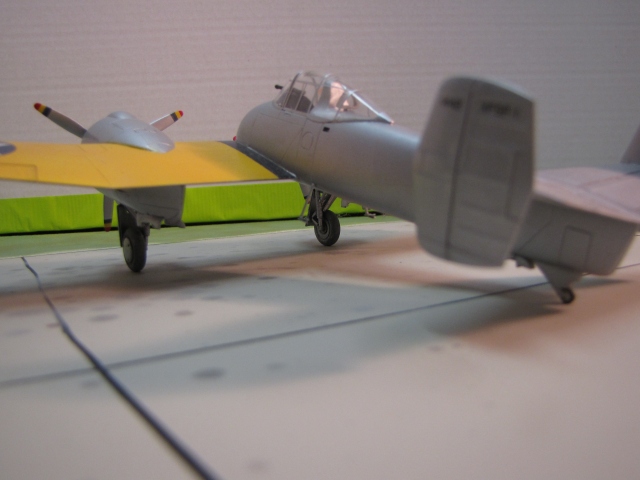 But in 1938-1940 the future was unclear.  As radical as the Skyrocket looks, it could be considered “safe” for using the well tested R-1820.  Flight testing showed the Skyrocket to have several good traits; the counter-rotating propellers made for good stability.  The top speed over 380 mph was better than anything in service; and the rate of climb was phenomenal, the best of any of the experimental aircraft.

I think these two pictures really emphasize the powerful engines on a small air frame. The planned armament was four .50s in the nose.

There were drawbacks too.  There were aerodynamic issues with the fuselage.  I’ve read several directly contradictory reports on what those issues were, so let me tread carefully here (pilots called the type very stable; engineers were critically concerned about its stability?!); but the nose and tail surfaces were redisigned a couple times, and much of this research was later applied to Grumman’s more advanced F7F twin.  But the biggest issue seems to have just been manufacture and support.  As a twin, the Navy was concerned the type could not be easily mass produced, and it would be a drain on fuel and maintenance resources in the fleet. 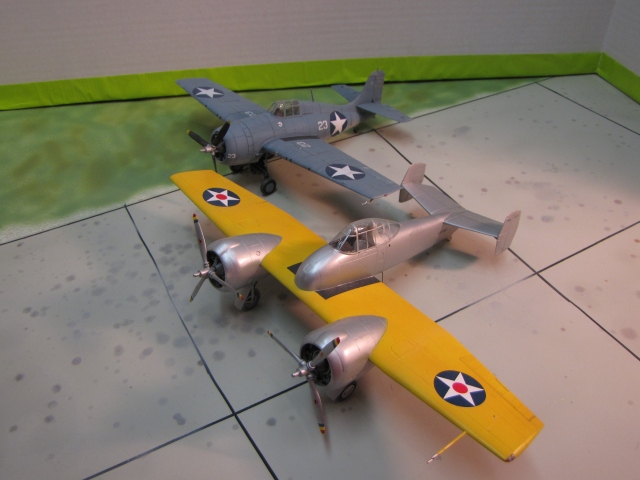 F4F-4 Wildcat and its possible replacement.

Apparently, by the time the prototype flew, it was already seen as a pure research aircraft.  Even if test pilots praised its suitability for carrier operations, and delighted in climbing away from the XF4U-1 like it was standing still (LCDR Crommelin, Navy test pilot, reported thinking the Corsair must have been having engine problems, because he climbed away from it so easily), it was not seriously considered for production.  The Army ordered a land based derivitive, the XP-50, but this was also purely for test and comparison.  The type clearly had less potential than the P-38 (slower and lower critical altitude).

The type did however see lengthy operational service in Quality Comics “Blackhawk” series (later acquired by DC).  This series was originally published from the ’40s to ’60s; the Skyrocket was the only piston engine aircraft used by the Blackhawk squadron until they re-equipped for the jet-age.

This subject is from the Academy kit.  It was a simple and trouble free build.

Up Next: Jagdpanzer 38(t) Hetzer

I'm 5o-something years old and live in Ypsilanti, Michigan. I'm happily married to Jodie. I was an air traffic controller for 33 years and recently retired; grew up in the Chicago area, and am still a fanatic for pizza and the Chicago Bears. My main interest is military history, and my related hobbies include scale model building and strategy games.
View all posts by atcDave →
This entry was posted in Fighter, prototype, USA and tagged Aircraft Models, Scale Models, World War II. Bookmark the permalink.