Ford had just introduced an all new car in 1941. It was considered very modern and state of the art. Only a few tweaks were done for the 1942 model year. But the coming of war in December of 1941 changed the automotive landscape considerably. 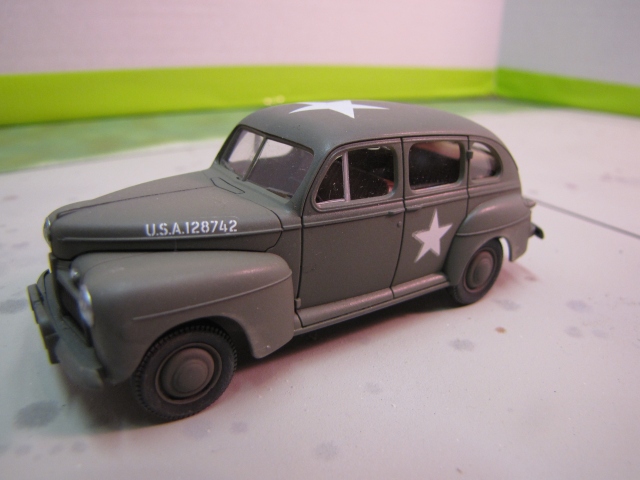 Let’s take a look at the wartime product.

One of the first consequences of the war emergency was that a government commission regulated all industry in the US.  Ford would be assigned several important projects during that time, but the manufacture of new cars was pretty far down the priorities.  For starters, all production of civilian cars was simply halted.  The 1942 model would remain in production as a “light duty” staff car until February of 1942.  That means it was available to officers outside of the combat theaters.  It was modified to have all chrome removed, and all aspects of the design were locked.  That is, there were no options and it was available only in Olive Drab.

One funny aspect to this I’ve found, apparently title/registration was done differently by some states in the 1940s; so in some states, those few 41/42 Fords that were sold as new during the war, would be designated the year of the sale, not the manufacturer’s model year.  So fun bit of trivia; if you see a 43-45 model year on any American car you know its a little bogus.

This is the Tamiya kit.  It was a fun and easy build.

I'm 5o-something years old and live in Ypsilanti, Michigan. I'm happily married to Jodie. I was an air traffic controller for 33 years and recently retired; grew up in the Chicago area, and am still a fanatic for pizza and the Chicago Bears. My main interest is military history, and my related hobbies include scale model building and strategy games.
View all posts by atcDave →
This entry was posted in USA, Vehicle and tagged Scale Models, World War II. Bookmark the permalink.