Perhaps the best known Japanese bomber of World War II, the Betty was a modern and dangerous weapon in use from the very start of the Pacific War.

Let’s take a look at an early Betty, from a very famous mission.

Japan was unique among the wartime powers in having a powerful, land-based anti-shipping force.  Going back to 1932, at the insistence of the chief of the Japanese Navy’s  Technology Division (Adm Isoroku Yamamoto), an order was placed for a long range torpedo carrying aircraft.  The goal was to have a force multiplier, a bomber that could make up for the Washington Naval Limitations Treaty that only allowed Japan 70% as many aircraft carriers as the US or Britain. This resulted in the Mitsubishi G3M Nell entering service in 1936.  As a twin engine bomber it had a combat radius of over 1300 miles at a speed of 230 mph.  This was a very long range and high speed for its time.  It meant the Japanese Navy had a far more capable and dangerous bomber force than the Japanese Army.

Betty is a big girl!  Its not hard to see why crews called her the “Type 1 Flying Cigar”!

But the IJN knew this could be bettered.  The Nell had about 2000 total horsepower but by the time it entered service Mitsubishi had a new engine of 1500 HP (the Kasei 11). So a new bomber was ordered to take advantage of it.  The resulting G4M had a 1600 mile radius at 260 mph.  It could carry a torpedo or 800 kg of bombs.  Although that’s a fairly small bomb load for an aircraft of its size, the Japanese Navy’s Type 91 aerial torpedo was absolutely the best in the world. Nothing else was even close and Japanese torpedo performance would cause serious angst among opponents during the War.

The tail gun is a 20mm cannon.  It wasn’t a very agile mount, but attackers had to take it seriously.

Of course that range and speed came with a price.  Although the aircraft was structurally pretty solid (there are several stories of G4Ms returning home with significant damage) weight was saved on crew armor and self sealing fuel tanks. So often, if the aircraft was shredded the crew was too.  Even worse was its propensity for bursting into flame.  Apparently Japanese crews took to affectionately calling their plane the “Flying Cigar” because of its shape, but the name quickly took on a bitter tone because of how quickly it lit up. 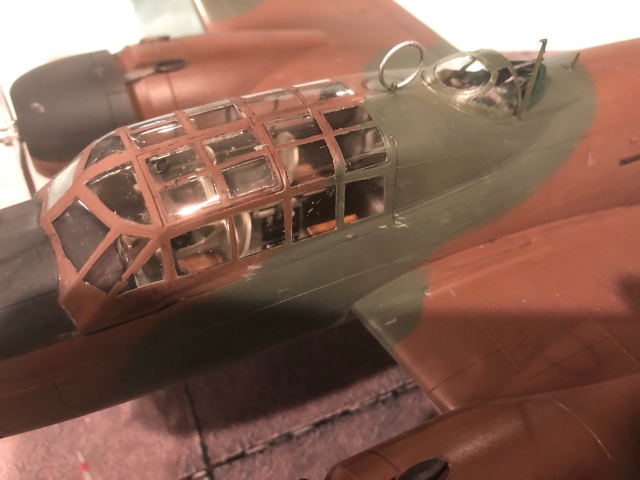 Just enough interior detail to look like a bomber.

A quick run down of its operational career; it started service in the China War where it established a good reputation.  By flying high and fast, with new A6M Zeros as escort it seemed to be able to bomb targets, even those deep in enemy territory, with impunity.  After Pearl Harbor Formosa based G4Ms destroyed American air power in the Phillipines.  This was a major success because due to weather, the mission wasn’t flown until afternoon on December 8.  Yet American bombers were still lined neatly along the runways at Clark Field and were easy targets.
On December 10, Saigon based Bettys had an even bigger success when they sank the Royal Navy’s Force Z (see below).
For the next several months Japanese airpower set the tempo across the Pacific. The first hitch came on February 20, 1942.  The 4th Kokutai had just moved into the newly captured airfield at Rabual.  A US Navy Task Force built around the carrier Lexington was spotted while it was still a full days steaming from being able to launch an attack.  So a strike of 17 G4Ms in two waves were sent to attack at long range to bomb (torpedoes hadn’t been delivered yet), without fighter cover.  The first group of 8 flew right into a well vectored fighter defense. Several did get close enough to bomb, but the entire flight was wiped out.  The second wave of 9 only encountered one Wildcat.  No problem.  Right?  This was the day Edward O’Hare became the Navy’s first Ace of the War.  This was also the day the Japanese first realized their G4M might not be invincible.
After the Lexington sailed away unscathed the 4th Kokutai was rebuilt, Rabual was reinforced, fighters arrived.  Bettys were actively involved in New Guinea, especially against Port Moresby; they bombed Darwin from newly captured bases in Timor.  In August things really heated up with the start of the Guadalcanal Campaign.  Bettys did have the range to reach Guadalcanal from Rabual, and so did their Zero escorts.  This became the first really epic campaign of the Pacific War, and it showed the G4M’s weaknesses sharply. 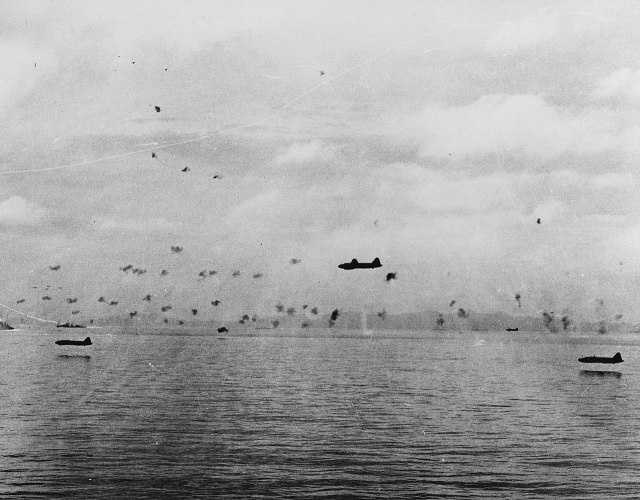 G4Ms making a torpedo attack against the initial invasion of Guadalcanal on August 8, 1942. Drop height was often less than 20 feet.  On this day, out of 23 attackers only 5 returned to Rabual.  Betty at lower left was flown by Jun Takahashi who survived both the attack and the War. (Public Domain)

Attempts were made to fix those weaknesses.  Light crew armor appeared on later models and a rubber liner was added to the gas tank.  But such fixes were limited by the power available; basically the same engineering choices every aircraft design is faced with, and it was hard to correct for foundational hardware decisions.  What was really needed was a new aircraft with more powerful engines.  In this, the Japanese failed pretty completely.  New designs DID appear, but no reliable next generation engine was ever mass produced by Japan.
Later variants, G4M2 and G4M3, served to the end of the War.  After the atomic bombing, the Japanese surrender delegation flew to meet with the Americans in two white Bettys.

The G4M had a curious bomb bay.  The doors did not open.  For non-bombing missions a solid cover was mounted to the opening to improve aerodynamics.  If a bomb load was carried, the cover was left off.  For a torpedo, only the center of the cover was removed.  Didn’t Chevy do a truck like this?

This particular aircraft was flown by Lt Haruki Iki of the 22nd Air Flotilla.  On December 10, 1941 they were ordered to find and attack a powerful British surface force operating east of Malaysia.  This was Force Z with Prince of Wales, Repulse and four destroyers.  There were several Japanese amphibious and transport forces in the area so neutralizing this threat was considered important.  Further, with no heavy Japanese fleet units in the area, air attack was the only possible answer.  No one had ever expected land based air to establish naval dominance before.
Japanese search planes did spot Force Z on the morning of Dec. 10; but there was hope among the British and fear among the Japanese that the sighting reports would not get to the bombing force. It finally came to the location being transmitted in the clear to get the bombers pointed the right way.  Force Z requested fighter cover from Singapore when the bombers were sighted. The bomber force was split in two by type. 32 G3Ms found the British fleet first.  They had a mix of bombs and torpedoes.  They scored hits, caused serious but not critical damage to the Prince of Wales and trivial damage to the Repulse.  The second wave of 26 G4Ms were all armed with torpedoes.  They put four more torpedoes into Prince of Wales.  But Repulse nimbly evaded the next six attackers.  That left a final section of nine planes under Lt Iki.  He observed only Repulse required any attention so he split his force to attack it both flanks at once.  Iki, with his two wingmen, attacked from port and scored three hits, although only Iki survived the anti-aircraft fire.  The six planes attacking from starboard scored one additional hit.
Repulse then sank quickly, Prince of Wales shortly afterwards.  The four destroyers where rescuing survivors when a flight of Buffalos arrived as cover. 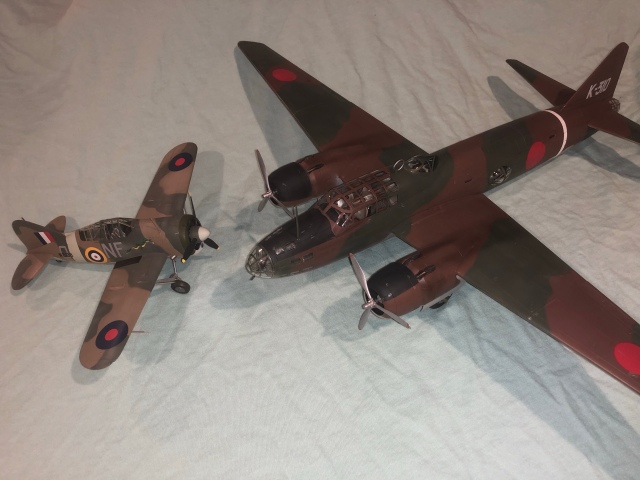 On December 10, Buffaloes arrived when it was just too late.

This is the Tamiya kit.  Its an older one now, dating back to the 1990s.  Fit and engineering are good even if a few generations old.  The interior is not very detailed, but even with all that glass its hard to see much of it.  I sort of prefer it that way, no need to fuss with things that will never be seen when finished!

The Wildcat had some of its most spectacular successes against the G4M.

I'm 5o-something years old and live in Ypsilanti, Michigan. I'm happily married to Jodie. I was an air traffic controller for 33 years and recently retired; grew up in the Chicago area, and am still a fanatic for pizza and the Chicago Bears. My main interest is military history, and my related hobbies include scale model building and strategy games.
View all posts by atcDave →
This entry was posted in Bomber - Tactical, Japan and tagged Aircraft Models, Scale Models, World War II. Bookmark the permalink.