Perhaps the aircraft most associated with the changing tide of the Pacific War, The F6F Hellcat was the key Naval fighter of the last part of the War. 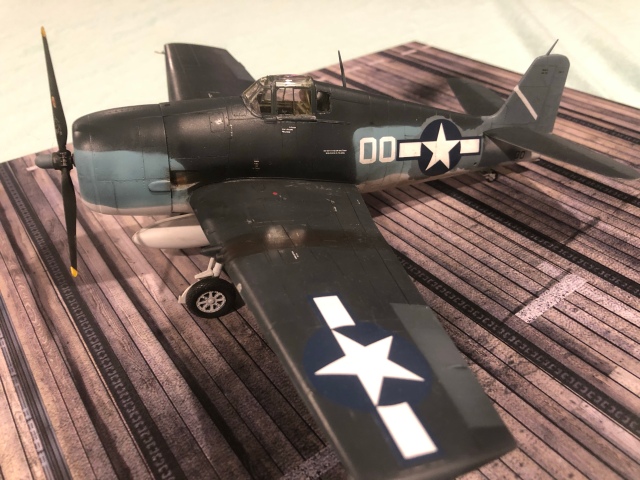 Let’s take a look at a complete game changer.

Grumman had started work on a successor to the Wildcat almost before that type entered service.  Contrary to the myth that the Hellcat was designed specifically to counter the Zero, the first contract for the type with the Navy was signed in June of 1941.  However, in April of 1942 Grumman did launch a study of combat reports to see if changes needed to be made before the design was locked.  The study included a personal interview with Edward O’Hare.  A few tweaks were made, the cockpit position was raised and the cowling sloped downwards to improve forward visibility.  The XF6F-1 flew in June of that year with the R-2600 engine and an XF6F-2 which was similar except for better turbocharging flew shortly after.  But back in April the biggest change decided on was a switch to Pratt & Whitney’s more capable R-2800 engine.  This first appeared in the XF6F-3 that flew in July of 1942.  Notice this is all a very fast timeline, urgency was high and things were getting done quickly.
The production F6F-3 had only minor changes from the prototype.  It first flew in October of ’42 and deployed with Air Group 9 to the Essex in February of 1943.

These colors and markings are fascinating to me. This is obviously a very early Hellcat with the aerodynamic fairings on the wing mounted machine guns and forward racked antenna mast.  Such early Hellcats were delivered in Blue-Grey over Grey camouflage.  When the Navy switched to the tri-color scheme in spring of ’43 they allowed the old blue-grey to remain instead of the newer Intermediate Blue.  The bottom was just painted white and the uppers got Sea Blue.  But the photo below shows something, maybe brushed on, around the rear insignia.  My GUESS is that when the Insignia was changed in July and August of the year the painters did some touch up with the newer Intermediate Blue color.  Purely a guess, but that’s my interpretation here.

Now’s the time switch the narrative over to James Flatley.  At the start of the Pacific War the US Navy was blessed with two particularly notable tacticians; John Thach and James Flatley.  Thach and Flatley were friends and worked together on tactical challenges.  They began work on what Thach called the “Beam Defense Maneuver” before the War, based on rumors from China (via Claire Chennault) that the Japanese had a type that was both faster and more maneuverable than any Allied type.  They practiced with one group of planes restricted to 2/3s throttle to see what could be made of it, until Thach came up with the maneuver involving four aircraft protecting each other.
At the Battle of the Coral Sea Flatley was deputy commander of Fighting 5 on the Yorktown and flew in three separate engagements while claiming three kills.  After this he returned stateside to take command of Fighting 10 flying Wildcats.  The squadron was known as the Grim Reapers, making Flatley “Reaper Leader”.  In this role, flying from the Enterprise, he fought at the Battle of Santa Cruz and had the opportunity to personally test the “Beam Defense Maneuver”.  Afterwards, he insisted it be called “The Thach Weave” and that’s how been known ever since.  He was also credited as an Ace with six kills from this point.
One area of disagreement between Thach and Flatley was their assessment of the Wildcat.  Flatley was a big supporter of the type, especially versus the Zero.  As he put it, the Wildcat shoots down Zeros and brings its pilots home.
After Santa Cruz, Flatley was promoted to command Air Group 5 which had been assigned to the new Yorktown (CV-10).  As such he made the first ever deck landing on that ship (which is now a museum at Patriot’s Point, South Carolina).  Later, on August 31 1943, he commanded an airstrike on Marcus Island that was the combat debut of the F6F Hellcat.  I believe he was flying this same aircraft, his personal Hellcat, during that entire period.  That was the end of his combat flying career, he later held staff and command positions rising to Vice Admiral before his retirement post-War.

I love this photo.  This may be the dirtiest CAG aircraft I’ve ever seen!  On the bottom of the wing, just behind the landing gear, you can see the extra tank rack I didn’t notice until too late.  This picture is the motivation for this build. (photo from Carrier at War by Robert Lawson and Barett Tillman) 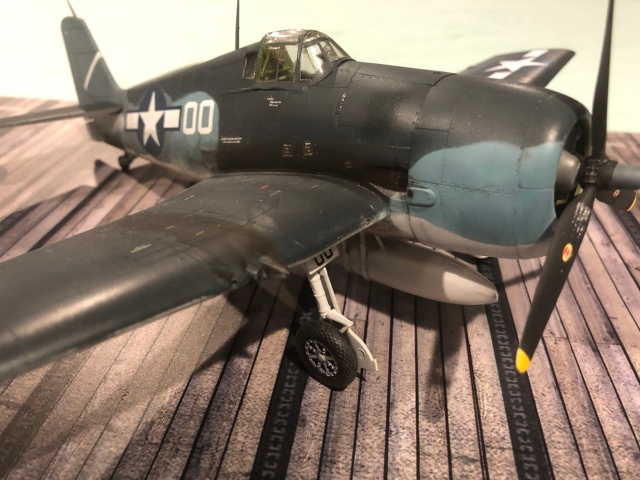 Traditionally, Air Group Commanders carried number “99” as their side number.  The origin of “00” is obscure.  But odd considering “Double Naught” (or “Double Nuts”) was radio slang for an Admiral.  To avoid irritating higher ups, Flatley used the call sign “99 Sniper”.  Today, 00 is the standard marking for an Air Group/Wing Commander.

Back to the Hellcat, the type had a devastating impact on Japanese airpower.  It was flown by both Navy and Marine pilots and scored 56% of all Navy/Marine aerial victories in the Second World War. It’s overall kill/loss ratio was 19:1.  And unlike the Corsair, it was designed with durability and ease of maintenance in mind (the Grumman “Iron Works” had a reputation to uphold!) such that at any time 90-95% of deployed Hellcats were expected to be operational.  These are all unheard of numbers for a combat type.
Although the Navy always favored the Hellcat over the Corsair for its ease of maintenance and good deck manners it did come to share deck space with Corsairs towards the end of the War when higher speed and rate of climb became paramount for battling the Kamikaze.

This is the Hasegawa kit with Superscale Decals.  A painless build in every way.  Late in the process (during final weathering!) I discovered this particular aircraft had extra fuel tank racks installed under each wing.  This was so the Air Group Commander would have extra loiter time for strike coordination.  But too late to show it here.  Oops.

Hellcats shredded Zeros at every opportunity. 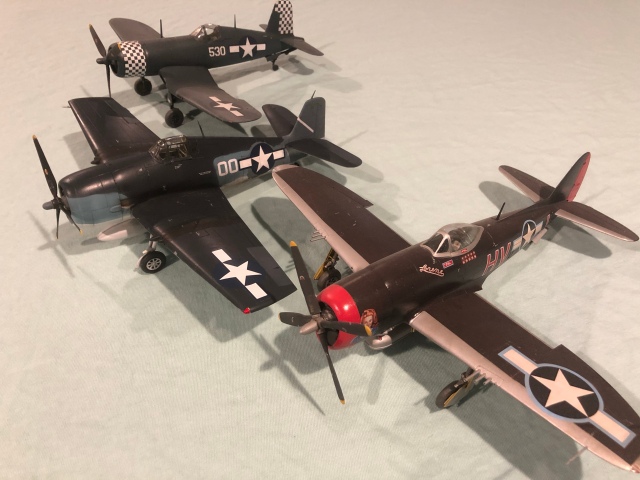