The Mustang has already been discussed at some length here, and will continue to be so. Because seriously, I have a lot of still unbuilt Mustang kits in my stash.

This time, we’ll take a look at a model inspired by a photo.

There are several model types that seem to draw extreme attention from hobbyists.  In my area(s) of interest the Bf 109, Spitfire and Tiger tank are the most ubiquitous.  And of course, I have or will build plenty of each of those too.  But my love of and fascination with Mustangs is on another level. 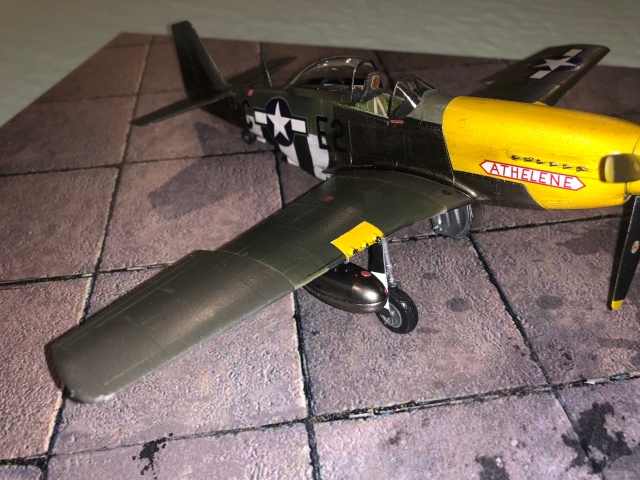 Like so many aircraft, “Lou IV” had another name.  It was “Athelene” to its crew chief.

I’ve mentioned before the book that first got me hooked, when I was 10 years old, was Duel For the Sky by Herbert Molloy Mason.  Well, that book had a beautiful, and well known image on the cover.

Even a ham fisted builder like me can get some benefit from the beautiful, detailed cockpit!

As a ten year old I was fascinated with everything in the book.  It started with the Spanish Civil War and continued through the war years, so pretty soon my mind was full of Spitfires, Messerschmitts, Thunderbolts, Corsairs…
But those Mustangs on the cover were something special.  The book was first published in 1970, so you can know that color image on the cover was the only color the book had.  Of course all of us who follow the period know that color images are uncommon (not quite “rare”, but certainly not common!). 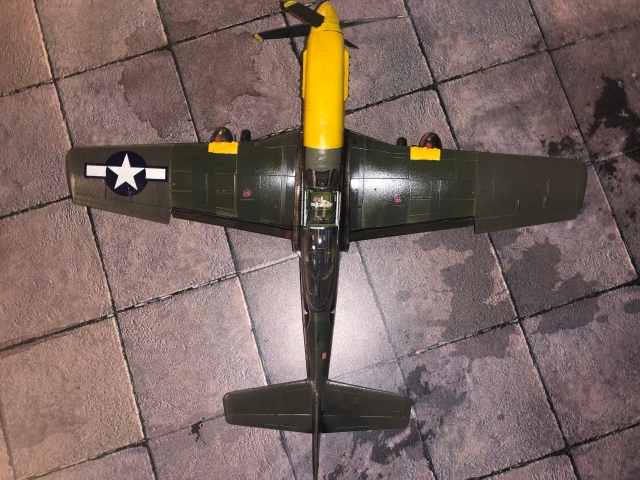 Several years back Aeromaster released a decal sheet that featured “Lou IV”, the lead plane in that formation shot.  And I knew that eventually I had to build it.  I put it off for a while for a couple reasons, most obviously its an early P-51D (specifically a P-51D-1) without forward fin extension.  Notice the front Mustang is a later plane, the vertical tail extends forward almost to the antennae mast.  Well I knew that little modification would be some extra work, so I put it off.  But then late last year Eduard released the early
P-51D with the appropriately modified parts.  Given how state-of-the-art that kit was, I knew I had to do something special with it. 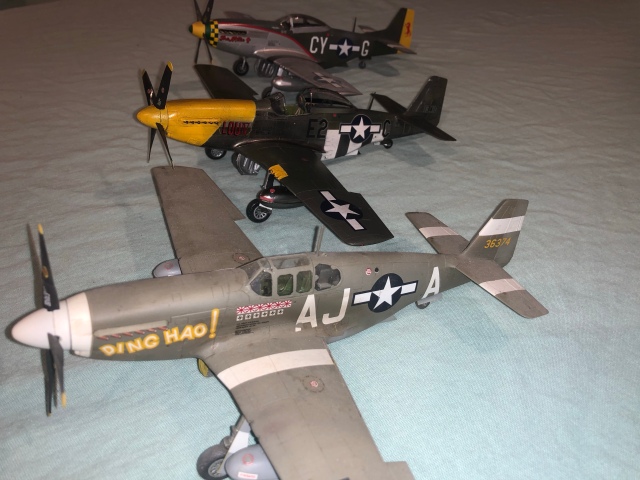 Variations in form of the Mustang as an escort.  The “B” in front was most lacking in rearward visibility.  The “D” fixed that with a bubble canopy, but the cut down rear fuselage compromised yaw stability.  So most “D” Mustangs added a vertical fin extension as seen on “The Millie G”.

My second reason for hesitating so long is just that Lou IV is a very complicated paint scheme.  Not just complicated, controversial.
Its funny how much thought and passion have gone into analyzing THAT one photo.  So let’s take a little look at what is known about that paint scheme.  In May of 1944, in the run-up to Operation Overlord, fighter groups were told to apply disruptive camouflage of some sort to the upper surfaces of their aircraft for a possible move to the continent. 361st FG reported using either Olive Drab or RAF Dark Green on all aircraft.  Then on June 3 black and white stripes were added to the fuselage and wings of all tactical aircraft and fighters.  These were often not measured or masked with any great care, but many aircraft actually looked quite tidy.  Of course many did not!  But this photo of 361st FG aircraft looks pretty good, even if it was just for the photo op.
Then,on July 4, the upper stripes were ordered removed from wings and fuselage.  In most cases these were simply painted over, ideally with the same or similar color as the previous camouflage.
I also should mention the 361st Fighter Group’s signature yellow nose was redefined and modified a couple times during the war, I love how in the photo we see a couple different styles of it. The full version worn by “Lou IV” was introduced in July of ’44.

So that was all involved, but then comes the controversy.  A group of English boys, enthusiastic aircraft spotters, claimed several 361st FG aircraft had BLUE disruptive colors on top.  A couple of Warbird Mustangs (including a replica “Lou IV”) have been painted that way.  But the group officially, and veterans interviewed in several sources, only ever mentioned Olive Drab or RAF Dark Green.  56th FG did some blue Thunderbolts (the whole 63rd Fighter Squadron), but officially no Mustangs.
What’s the deal?  Sort of a rhetorical question, at this remove we can’t really know.  Even a beautiful color photo isn’t proof of anything; colors shift wildly with lighting, type of film used, processing and reproduction.  Again, at this time these photos have been reproduced so many times we’re even further from “knowing” anything than we could have been in 1944.
It really is amazing to me how tense some arguments get on this topic at certain websites.  My own feeling on the matter is this, no blue Mustangs.  Olive Drab can look more blue, green, brown or even purple based on lighting and wear.  That combines with a clear blue sky on shiny aluminum skin that might suggest blue.  The best prints I’ve seen of “Lou IV” do look like there’s a color break where the upper invasion stripes were painted over, but proof of any specific color just isn’t there.  So I made the assumption the original upper color was Olive Drab (the older ANA OD.  The newer FS OD might have been available, but that’s lighter and more likely to shift green than blue), but then RAF Dark Green was used to cover the invasion stripes. At least, that’s what I’ve tried to show. 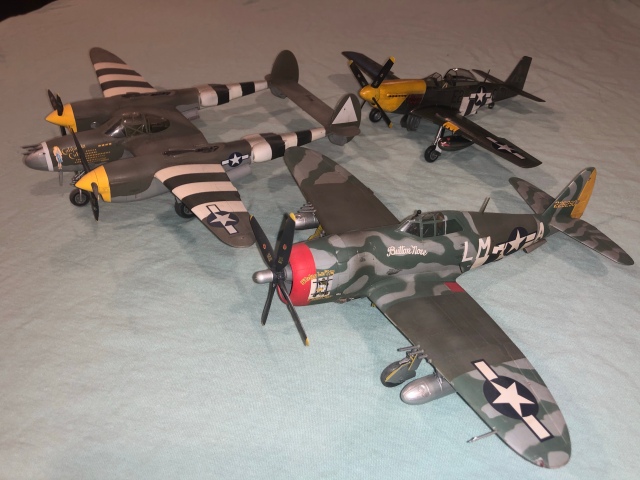 American long-range escort fighters.  The Lightning (front, left) could carry oversize drop tanks that gave it nearly the same range as the Mustang, but its performance was just a little less in most ways.  The Thunderbolt was always just a little shorter ranged than the Mustang until its final “N” variant.  But it did need almost twice the fuel to get the same range.

I have to admit being not completely happy with the result.  For starters, I’m probably too ham fisted to really get the most out of the fine detail offered on the new Eduard kit.  I still have a large number of the older Tamiya Mustangs and I’m sure that will be most of what I build in the future.
I really wanted this one to be something special though, so I tried for a different way of doing the aluminum skin.  I used Alclad II lacquer.  In places, like the canopy and drop tanks I’m very pleased with how it looks.  But the fuselage and underwings went VERY dark.  Much darker than they first looked.  The finish does start with a gloss black undercoat, so I may have misjudged and not applied enough of the Polished Aluminum top coat?  Or maybe, the black oil wash I applied to highlight panel lines and details was somehow soaked into the lacquer?  I’ve not had that happen before, but this is a new material for me.  Where it worked as I wanted it to was good enough I will definitely try it again, maybe on a simpler paint scheme!

By the time the “D” model Mustang entered service the Luftwaffe’s heavy bomber destroyers had been mostly chased from the sky by the “B” Mustangs; so it mostly faced German single engine fighters like Bf 109 and Fw 190.

I’ve done this whole post in backwards order!  I do need to say “Lou IV” was flown by Colonel Tom Christian, commanding officer of the 361st Fighter Group. He was killed in this airplane when he was shot down by ground fire on August 12, 1944.  Because of the well known PR photo (used on the cover of “Duel For the Sky”) this is one of the better known aircraft of the 8th Air Force.  I suspect if the appropriate early “D” Mustang had been available earlier it would be a much more often built model too.  Many of those early “D”s had the fin extension added as a field mod, so for modelers who want to do one like “Frenesi” or “Happy Jack’s Go Buggy” its easy enough to just say they built the “after” version; but “Lou IV” had a comparatively short service life and was never modified.  Yeah, many modelers care about this sort of stuff!