The Japanese Army’s newest fighter at the start of the Pacific War, the Ki-43 remained in service to the end of the war.  Long past it’s obsolescence. 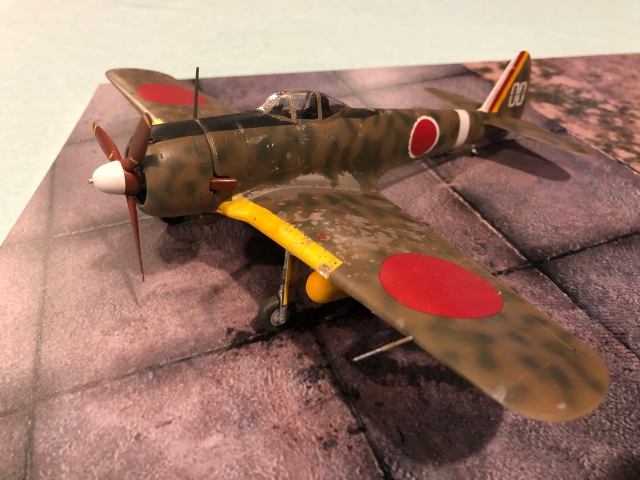 The Ki-43, like the Japanese Navy’s A6M Zero, stayed in production through the whole war because of a failure to build enough of a next generation fighter.  It needed to be replaced by 1943, but only saw a minor upgrade of about 200 hp to go from just below to just above 1000 horse.
Parallels between the Oscar and Zero abound.  They were both designed around a philosophy of maneuverability being the single most important characteristic for a front line fighter.  The Oscar pushed this even further than the more famous Zero, it was capable of shocking twists and turns at the expense of speed, durability and firepower.  Its hardly surprising allied pilots often could not tell the two apart, even to say (guess) the majority of Oscars encountered were recorded as Zeros.
This often went to comical extremes with Zeros being reported en masse at locations that were completely under the domain of the Japanese Army.  Or even worse, on occasion large mixed formations were reported.  Never mind that the Japanese Army and Navy were more aggressively at odds with each other than any two branches in any national military.  They were very territorial about areas of operation.
I’ll even guess a mixed formation of US Army Air Force and RNZAF bombers escorted by Marine fighters was more likely than any mixed formation of Japanese Army and Navy types! 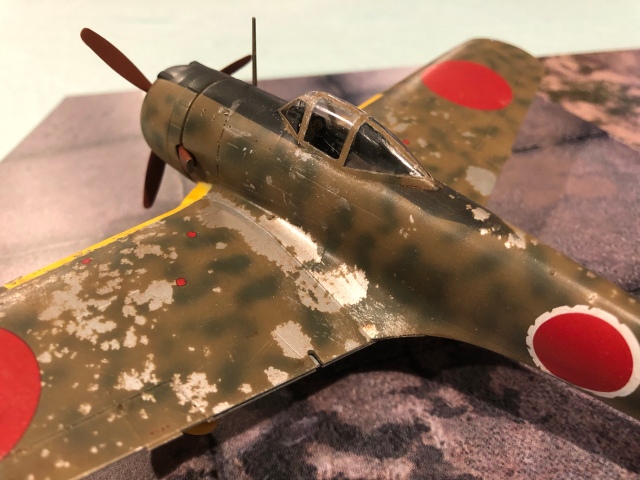 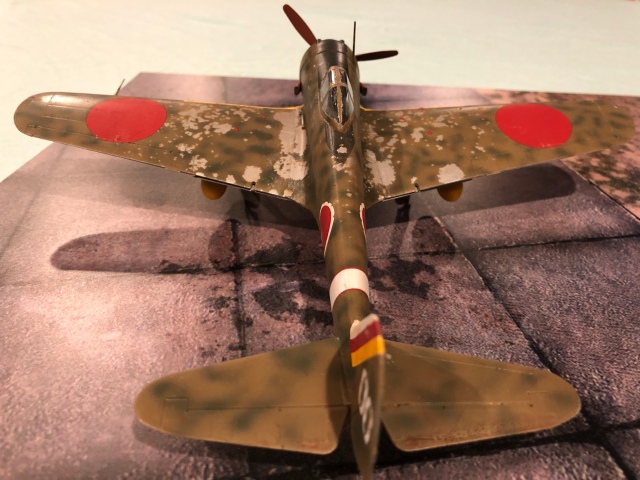 This particular Oscar was flown by Major Toshio Sakagawa in the spring of 1944.  Maj. Sakagawa was commander of the 25th Sentai based in China.  Japanese commanding officers often did not fly with their units, indeed often were not even pilots.  Pilots were most often enlisted men and regarded more like technical specialists than professionals.  But Sakagawa was an experienced and capable pilot.  He flew in the China incident and against the Russians over Nomonhan (Mongolia).  He continued to fly combat late in the war, long after his rank made it uncommon, because he felt his experience and effect on morale were needed for his young pilots.  Sakagawa was promoted to Lt Col and claimed 49 victories before he was killed on a transport flight in December of 1944.
Most historians credit him with 15 kills.  His claims to fame being a B-24 shot down on his first burst on August 21, 1943 (the Oscar only had two 12.7 mm machine guns, so that’s remarkable shooting) and three Mustangs destroyed on May 6, 1944 (in this aircraft). 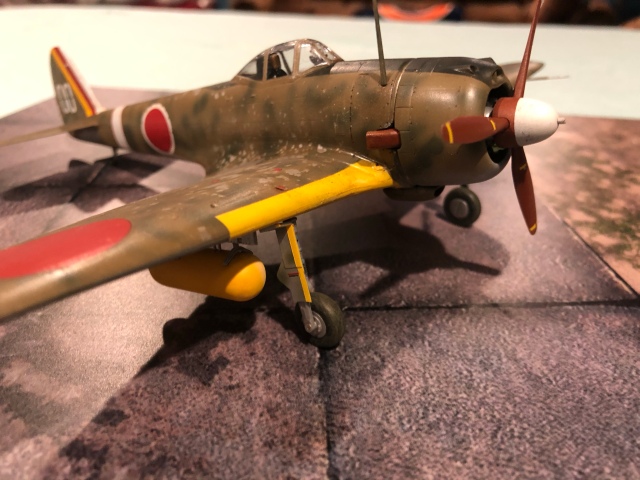 Its hard to imagine bringing down an American heavy bomber with just two 12.7 mm machine guns, but Maj Sakagawa managed it. 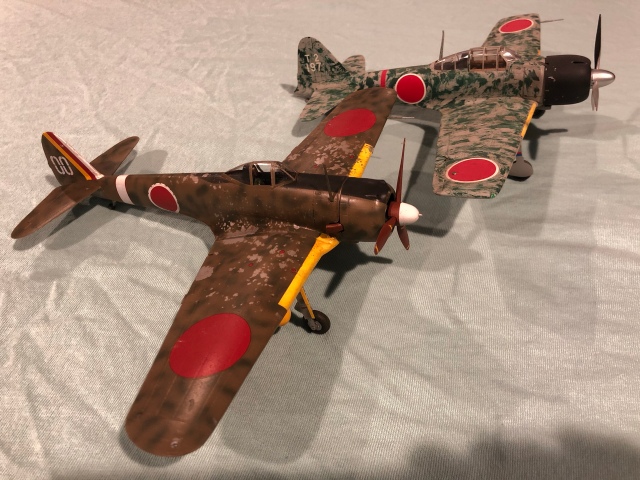 Oscar and Zero.  Both the Japanese armed services were using the same standard fighter from the beginning of the War to the end, and with much less modification as British or German types that endured.  Its easy to see why the two types are easily mistaken for each other, this particular Oscar carrying tactical number 00 doesn’t help the situation!

This is the Hasegawa kit with Aeromaster decals.  The kit was simple with no problems.  The paint scheme was exciting!  Japanese camouflage was fairly complex, but it was painted on the cheap with no primer.  Late in the war, the paints were of pretty poor quality too.  That makes pristine looking finishes an extreme rarity.  So I made this the scruffiest looking plane I’ve done to date.  For me, that is serious fun. 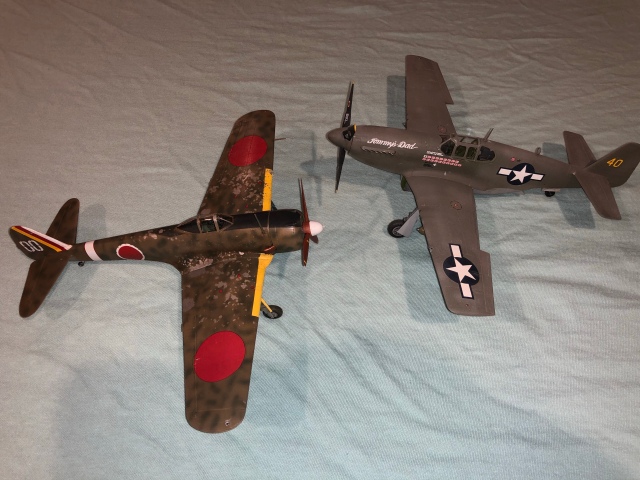 In China the Japanese Army would have regularly fought Mustangs in the last 18 months of war.  Although the Oscar should be considered outclassed in almost every way, it did always have the advantage in a close in turning sort of dogfight.  Maj Sakagawa demonstrated this on May 6, 1944 when he dispatched three Mustangs in a single fight.  This model is of the plane he used in that fight. 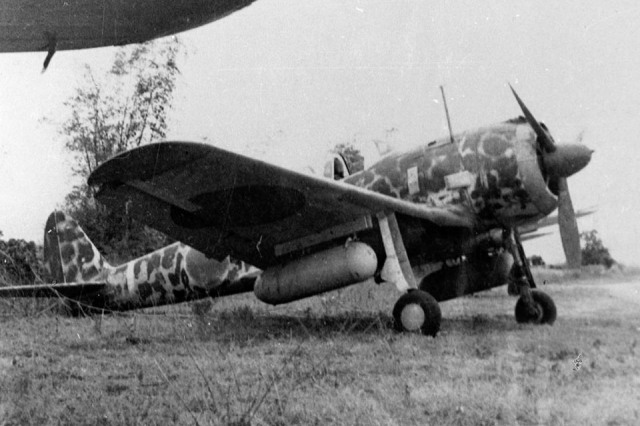