One of the better known fighter types of World War II, the Fw190 is often associated with the epic battles over the Reich between the Luftwaffe and US 8th Air Force. 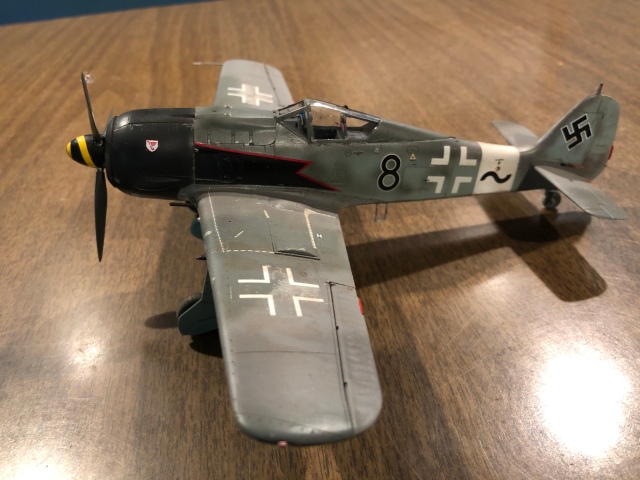 Let’s look at one veteran of that campaign.

Not wanting to be wholly reliant on one fighter type, the Luftwaffe ordered a new fighter design competition in 1937 to develop a partner for the Bf109.  The Fw190 would use a BMW139 (later, BMW801) engine to prevent bottlenecks of the Db601 used by the Bf109.  It was a more robust design, better suited to extended wartime operations, battlefield conditions and simplified maintenance.
The powerful BMW engine also allowed for heavier armament, weapons and payload. At low and medium altitudes the type proved superior, not only to the Messerschmitt fighter, but to anything the British were using too.  But performance degraded at higher altitudes.  That last part would prove to be a big problem, American bomber formations came over at high altitude.  Spitfires, Thunderbolts and Mustangs all provided escort at different times; and all three could outperform the Fw190 at high altitude.
I’m sure most readers know the basic story of how it was a real challenge to provide fighter escort throughout the whole of a bomber mission.  That made it quite the chess match for the Germans hit the bombers where the fighters weren’t.

Armament for this “A-8/R2” was two 20mm cannon at the inboard wing position, and two 30mm cannon outboard.  The 13mm machine guns above the engine were deleted as they were not considered helpful against American bombers.  Deleting the cowling guns is the crudest sort of conversion; the parts remained exactly the same as on previous Fw190s, the guns were simply not installed.

This subject is a Fw190A-8 which was introduced in February of 1944.  It had heavier armament, pilot armor and armored cowling ring specifically for closing with heavy bomber formations.
Going back a step, for several months in late 1943, early 1944; the Luftwaffe had an experimental “Sturmstaffel” that planned on getting very close to bomber formations to ensure hits and a kill. Ramming was considered a viable part of their tactics. This sub-type of Fw190 was meant for that group. The “experiment” ended in May 1944 when it was decided to add a “Sturm” section to several Jagdgruppen involved in Reich defense.  Basically that means the experiment was considered a success.  Of course at this point the Luftwaffe was arguably already past its breaking point and could no longer find enough skilled pilots to mount a truly effective defense.  It was all over but the shooting…

Fw190 and Bf109 were the Luftwaffe’s fighter tandem for most of the war.

The pilot of this plane was Willi Maximowitz.  He was an original Sturmstaffel pilot, who became a key part of the Sturmgruppe in JG3.  It is depicted here as it was summer of 1944.  Maximowitz is one of those pilots whose records are unclear due to the chaos at the end of the war; but he’s often credited with 27 kills, 15 of which were 4-engine heavies.  That makes him one of the more proficient pilots who specialized in Sturm tactics. He was killed on April 20, 1945.

The Fw190’s main opposition against bombers was Mustangs, Spitfires and Thunderbolts.  At the altitudes where bombers flew, any of these types was more than a match for it. 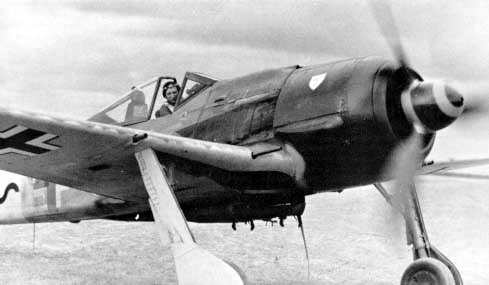 The subject aircraft with Willi Maximowitz

This is the Tamiya kit. It is truly a fun build with no real difficulties or issues.