Time for another look at that favorite American symbol of defeat and futility.

This time, a Buffalo in Kiwi service and the defense of Singapore.

Its been observed here before that there is far more to the story of the Buffalo than unmitigated disaster.  Prior to the US entry into World War II it had been a moderately successful export product.  Early versions of the type were considered maneuverable and fun to fly.  Indeed, before adding pilot armor, heavier fire power and complete avionics its power to weight ratio and wing loading were not far removed from the famed Japanese Zero.
Even with all the extra weight it compared well to the Wildcat and other types of its era in terms of performance.  And of course it put in extraordinary service with the Finns.  The type’s main shortcoming was just the manufacturer’s poor quality control.

That’s PO Sharp with his mount.  Really, I wouldn’t make that up…

But the history of the British and Commonwealth defeat in Malaysia, Singapore and Burma is full of tragedy and errors.  The definitive account of the air campaign is Christopher Shores’ “Bloody Shambles” trilogy.  The title sums it up well. As the primary allied fighter type in that campaign the Buffalo makes a fitting scapegoat for an ugly defeat.  But of course the real villains of the story have little to do with one aircraft type.  Overall confusion, lack of organization, fighter squadrons scattered in small numbers at remote bases (that could not support each other), insufficient command and control, and no understanding of the opponent paint the bigger picture.

There’s also a grand strategic level that really answers a lot of questions.  In late 1941 Great Britain was two years into a war that, by the numbers, was really beyond their ability to continue.  By that I mean they didn’t have enough manpower or industrial capacity to fulfill the empire’s global commitments at that time.  So naturally, a colonial area that wasn’t directly involved in the current fighting did not receive first rate combat units or weapons.  The Buffalo was considered the weakest of Britain’s “modern” types (Spitfire, Hurricane, Tomahawk) so it was sent to the least critical location.  There were supplies (fuel and ordnance) and maintenance available for peace time, colonial policing type work; but not full out combat against a first rate opponent.

The cowling ring on W8138 was borrowed from another plane in earlier style camouflage.

Its also worth mentioning the American defense of the Philippines hardly went any better. The situation there was very similar.  And yet the primary fighter type there was the Warhawk, which later proved very successful in fighting modern Japanese types as long as it was properly supported and the crews were properly prepared.  Even to say, during the defense of Darwin, American P-40 units fared better than British Spitfire units.  Truly, the preparation of pilots and quality of support matters far more than the type of air frame involved.
As far as that air frame goes its worth mentioning that its relative strengths and weaknesses against Japanese opposition were completely different from what they would have been against the Germans or Italians.  The British were used to dogfighting, using sharp banking turns to escape faster German fighters.  Against agile Japanese types they were basically in the German position; and should have responded by keeping their speed up at all times, diving away from bad situations, and utilizing hit and run tactics.  Of course from the British perspective the Buffalo seemed even more like a pure dogfighter than their much faster Spitfires.  But so little was known about their Japanese opponent no one had a clue how this would play out. 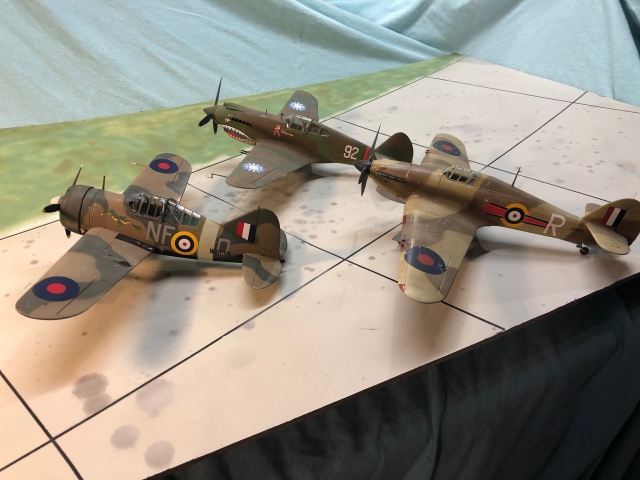 Major Allied types from the air defense of Malaysia, Singapore, and Burma.  The Buffalo was the main Commonwealth fighter at the start.  The Hawk 81 was flown by the American Volunteer Group (Flying Tigers) and based in Rangoon right alongside Buffalo squadrons.  AVG pilots were supposedly envious of the RAF pilots’ mounts at first considering them more capable; but largely thanks to Claire Chennault’s more realistic training and tactics they did far better than the Buffalo pilots.  The Hurricane IIb at right represents the type that was rushed to Singapore after the battle was joined to try and get something more capable and modern into use.  But the same story of insufficient numbers, support and preparation meant they did no better.

This aircraft, W8138, was flown by Pilot Officer Noel Sharp of No. 488 New Zealand Squadron in January of 1942 during the air battles for Singapore.  On January 13 he scored his first kill, a Ki-27 Nate, in this aircraft.  Five days later he used it to down an A6M2 Zero; but he was injured in the fight and W8138 was damaged.  Pilot and plane went separate directions after that, the plane was repaired and went to another squadron.  After recovering from his wounds PO Sharp found himself assigned to No. 605 Squadron flying Hurricanes in the defense of Java. He scored one more kill before loosing his life in those battles.

Two main opponents of the Buffalo.  The Ki-27 Nate (front, right) had been the Japanese Army’s main fighter type for several years and was still the most numerous.  Japanese units were re-equipping with Ki-43 Oscars as fast they could, clearly a more modern type.  The A6M2 Zero would be the most next important type here, but sadly I currently don’t have one…

This is the Tamiya kit.  Its an oldie with raised panel lines and some minor fit issues, but overall is not a difficult build.  I enjoyed this project and am mostly pleased with the result.

I'm 5o-something years old and live in Ypsilanti, Michigan. I'm happily married to Jodie. I was an air traffic controller for 33 years and recently retired; grew up in the Chicago area, and am still a fanatic for pizza and the Chicago Bears. My main interest is military history, and my related hobbies include scale model building and strategy games.
View all posts by atcDave →
This entry was posted in Fighter, New Zealand, USA and tagged Aircraft Models, Scale Models, World War II. Bookmark the permalink.

10 Responses to Brewster Buffalo Mk I