Few vehicles are more synonymous with a national war effort than the American Jeep.

Join me for a brief look at an iconic light vehicle.

The Jeep has a somewhat convoluted development saga,  its first form was delivered in 1941 by the Bantam company.  In a move that STILL causes tempers to flair, the US Army felt Bantam was neither big enough nor stable enough to meet production needs, so Willys-Overland was ordered to produce the vehicle.  Funny thing is, this actually happens a lot; when a prototype is built for any branch of the military, the military OWNS that design and can do with it as they please.  Its how we wound up B-29s built by Boeing, Bell and Martin during World War II.

But little Bantam felt they were ruined by this government decision.  They actually survived the war years as a component manufacturer.  But of course the Jeep story continued without them.    Shortly after Willys started production the Army decided they needed more than even they could build, so Ford also started Jeep production.  As far as corporate legacy goes, Willys became Kaiser-Jeep in 1963 and was purchased by AMC (American Motors Corporation) in 1970.  Chrysler then purchased all of AMC in 1987 and through all of Chrysler’s ownership changes that’s were we stand today.  As a part of Fiat-Chrysler, Jeep is their top selling brand. 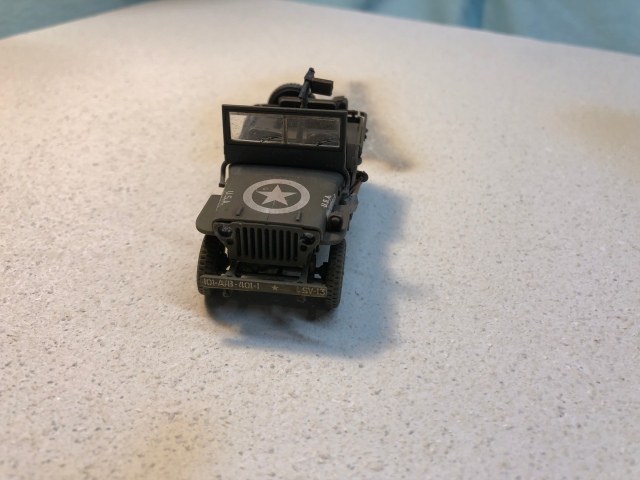 But of course modern day Jeeps have little to do with the Willys MB of World War II. Immediately post war Willys offered a “CJ”, a civilian version of the light truck.  While by the 1950s they were on to a “MC” for the military and a long evolution was underway.  The modern Jeep Wrangler may be the spiritual decedent of the MB, but look at them side by side, they truly have little in common and the size difference is huge.  The most obvious similarity may be the slatted grill; which is a Jeep trademark stamped on every steering wheel, and ironically, was first introduced as a Ford expedient to mass production.

The origin of the name “Jeep” is actually a bit of a mystery.  I’ve seen it called a phonetic of GP for “general purpose”…   which was never an official part of the Jeep’s designation, at least not the Willys produced vehicles…   or simply a slangy “thingamajig” sort of reference.  Armored divisions apparently called their Jeeps “Peeps”.

Jeep with Kurogane (Japan) and Kubelwagon (Germany). Similar light utility vehicles.  The Jeep stood out for its reliability and ease of maintenance.

This is the Hasegawa kit.  It is a little fiddly, but builds into a nice representation.

Jeep with M8 Greyhound at left and M4 Sherman behind.  Jeep and Greyhound were both used for recon.  The Sherman, well, it could crush the Jeep…

I'm 5o-something years old and live in Ypsilanti, Michigan. I'm happily married to Jodie. I was an air traffic controller for 33 years and recently retired; grew up in the Chicago area, and am still a fanatic for pizza and the Chicago Bears. My main interest is military history, and my related hobbies include scale model building and strategy games.
View all posts by atcDave →
This entry was posted in USA, Vehicle and tagged Scale Models, World War II. Bookmark the permalink.