This light armored half-track saw service from early 1941 to the end of the War.

Join me for a brief look at this German fighting vehicle.

Half-tracks date back to 1911 and were first designed to make a truck with greatly improved off road capability. They were meant to be faster and cheaper than pure tracked vehicles.  But only the US and Germany ever mass produced them (Russia, France, Britain, Japan; possibly others I don’t know, built them in much more limited numbers).

The “/3” part of the designation indicates this half-track is equipped as a command vehicle with long range radios.  The overhead mounted “bedframe” antennae is an easy way of seeing that. 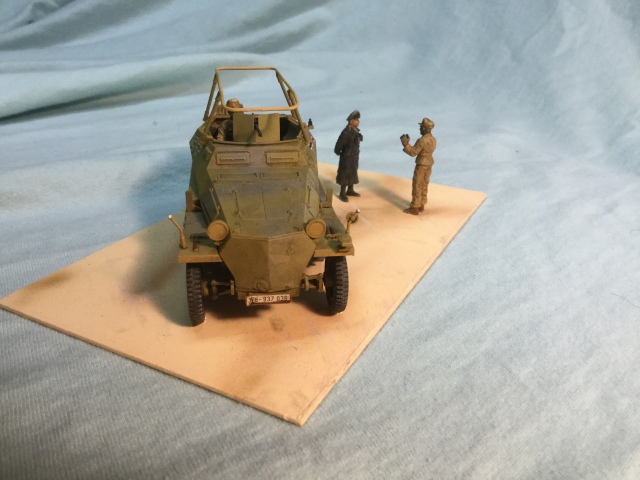 Before the War, the large Sd.Kfz. 251 entered service, mostly as a personnel transport.  It was used much as an APC today to provide infantry support to fast moving Panzer divisions.  But the Sd.Kfz. 251 was expensive and slow to build, so the smaller Sd.Kfz. 250 was ordered to supplement the bigger type.  It would especially see service with recon units and as a radio equipped command vehicle.

The vehicle shown here is perhaps the most famous such command half-track.  It was used by Erwin Rommel during the summer of 1942 for his drive across North Africa.  It is from the Tamiya kit.

The Panzer III at left was the main tank of Africa Korps during the summer, 1942 offensive.

I'm 5o-something years old and live in Ypsilanti, Michigan. I'm happily married to Jodie. I was an air traffic controller for 33 years and recently retired; grew up in the Chicago area, and am still a fanatic for pizza and the Chicago Bears. My main interest is military history, and my related hobbies include scale model building and strategy games.
View all posts by atcDave →
This entry was posted in Armor, Germany and tagged Scale Models, World War II. Bookmark the permalink.