Germany’s Bf109 is one of those iconic types that served through the entire war and is a symbol of that nation’s war effort.  Like other long serving types the Bf109 was modified heavily during that time.

Join me for a brief look at an intermediate model.

This is the most important version the Bf109 I haven’t even touched on yet here.  If the “E” model was pre-eminent at the start of the war, and the “G” at the end (there was also a “K”, but that was more of a “G” with a fresh coat of wax); the “F” was an obvious stepping stone.  It featured aerodynamic improvements all around; smoother nose contour, cleaner tail plane, and rounded wing tips. The engine was the ultimate expression of the DB 601 family delivering over 1100 hp.  And the armament was rearranged; all guns were removed from the wings and a new 15 mm cannon fired through the propeller spinner.  This last received mixed reviews, it made for a concentrated cone of fire with all guns in the nose; but the total weight of fire (2 light machine guns and a light cannon) was reduced. 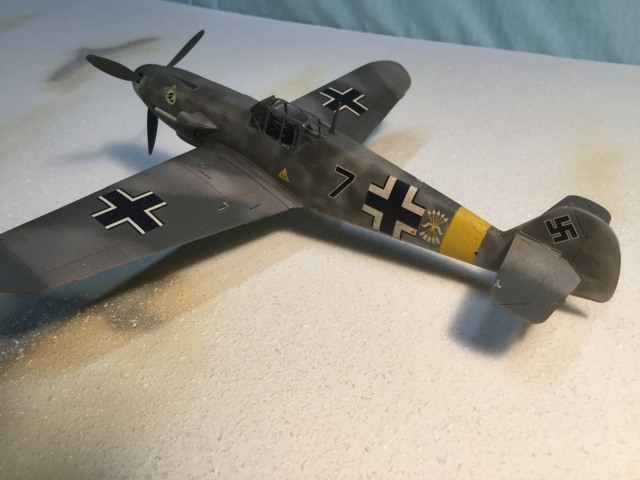 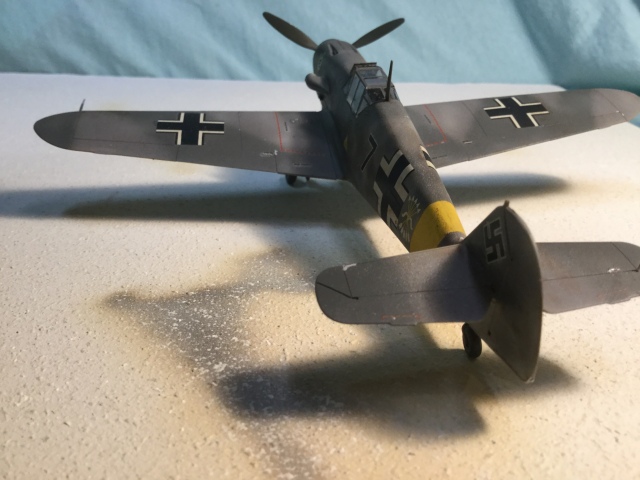 Although early production “F”s (commonly known as “Friedrich”) had some structural problems these were quickly sorted out and Friedrich came to be known as the best flying variant of the Bf109.  It best combined maneuverability and power.  When the “G” (Gustav) replaced it, the Friedrich’s basic form was retained but the new, bigger DB 605 engine replaced the DB 601.  No doubt it added power, but at the expense of handling.  Obviously for a fighter the pure power was more important, but many pilots preferred flying the Friedrich.

This view shows how clean the Friedrich’s lines are. (from airwar.ru)

This particular aircraft is the Hasegawa kit.  It is a Friedrich based on the Eastern Front, assigned to the “Blue Squadron”.  This is a story I wish I had more information on. When Hitler went to war against Russia he had attempted to convince Spanish dictator Francisco Franco (who is indeed still dead) to join in the war with him.  After several hours of negotiations Hitler supposedly said “I’d rather have several teeth extracted than go through that again”.  Franco would not join Germany in the greater war; BUT, Spanish volunteers would fight with Germany in their own units under the condition they were only to be used against Russia (Franco was a Fascist, who had just won his own Civil War against Communists with German assistance).  This took the form of both land and air units.  The Blue Division, as often happens with all volunteer forces, proved to be fully as capable as any German unit and was regarded as being the very best of the “foreign” forces within the Wehrmacht.

A 15 mm cannon fires through the propeller hub and two 7.92 mm guns are in the upper cowling.

Three major wartime variants of the Bf109. The “E” (Emil) at left already a well developed design.  The Friedrich at center offered mostly aerodynamic improvements.  The Gustav at right had a bigger DB 605 engine.  Notice also the bulges on the upper cowling of the Gustav for the bigger 13 mm machine guns.

The Blue Squadron is a more complicated story.  The initial idea was that they would form air support for the Blue Division.  But the Luftwaffe never made this happen.  They  formed an entire squadron attached to JG 27, with a few smaller groups on other detachments.  They were equipped with the Bf109E with hand-me-downs as Luftwaffe groups were getting Friedrichs.  Late in their deployment they finally were issued Friedrichs as seen here.  I seem to remember reading somewhere there was tension related to the quality of equipment and support they received from the Luftwaffe, but I cannot find that source for now.  Later, a second deployment of the Blue Squadron was attached to JG 51 with Fw190s and achieved better results.  In total, the “Escuadrilla Azul” scored about 160 kills for 20 losses.  I’d love to hear from any reader who might know more about this! 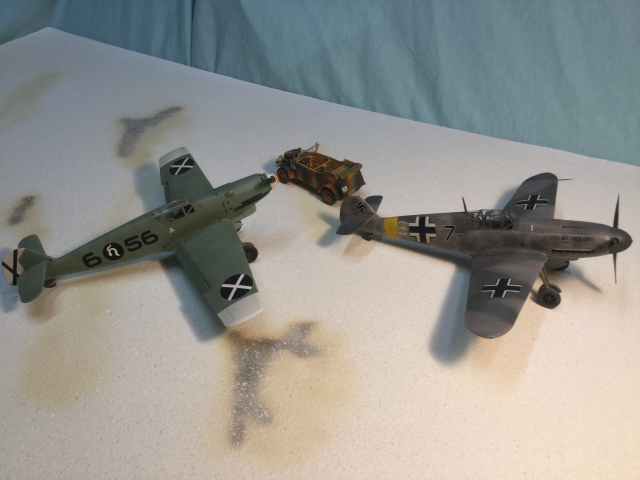 The Bf109D at left was flown by a German “volunteer” in Spanish Markings during the Spanish Civil War. The Friedrich at right was flown by a Spaniard volunteer in German markings.

I'm 5o-something years old and live in Ypsilanti, Michigan. I'm happily married to Jodie. I was an air traffic controller for 33 years and recently retired; grew up in the Chicago area, and am still a fanatic for pizza and the Chicago Bears. My main interest is military history, and my related hobbies include scale model building and strategy games.
View all posts by atcDave →
This entry was posted in Fighter, Germany, Spain and tagged Aircraft Models, Scale Models, World War II. Bookmark the permalink.