Another atypical Japanese fighter, designed in direct response to how the Japanese saw international trends in aerial combat.

After the jump, a Japanese interceptor.

A few times I’ve described the “typical” Japanese fighters at the start of WWII as being very maneuverable and lightweight, but sometimes too lightweight for their own good. The Tojo is an interesting contrast.  It was designed in response to what Japanese military observers were reporting from London and Berlin.  It was built to be fast, with a good rate of climb, heavy fire power and pilot armor.  The Japanese mindset remained offensive,  and as such the Tojo was not really envisioned as an interceptor; but more as top cover for the masses of more traditional type fighters like the Ki-43 Oscar. 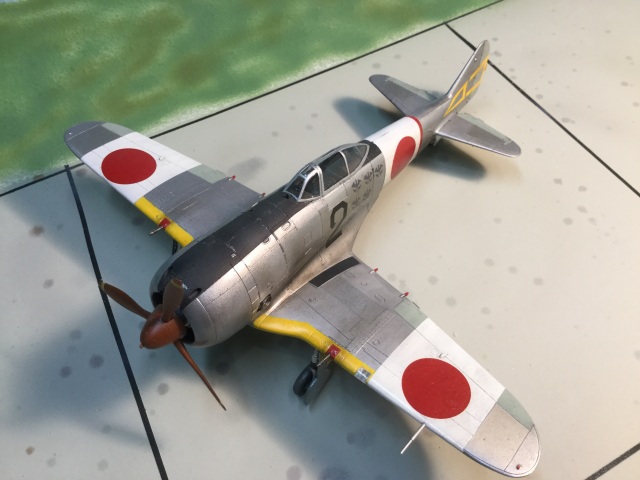 The Ki-44 came from the same design bureau as the Ki-43 and shared certain features such as the combat maneuver or butterfly flap.  But it was built around a much more powerful engine, the Nakajima Ha-41 produced over 1200 hp.  That’s 300 hp more than the Ki-43 had.  The small wings were designed to minimize drag and maximize speed; the cost in maneuverability was accepted.  Early versions were armed with two 12.7 mm machine guns; that’s two heavy mgs as opposed to the two light mgs of the Oscar.  Very quickly two more 12.7 guns were added to the wings, and eventually a special 40 mm cannon using caseless ammunition was designed for use in the wings.  That gave the Tojo bomber killing potential that was very uncommon in the Japanese Army.

This angle really emphasizes the large engine and small wing.

Before I go any further I do need to mention the unusual code name “Tojo”.  This was the only Japanese type to be code named for a specific individual.  That may be because it was named by a different intelligence unit than other types.  Allied Air Intelligence in Australia designed the system and assigned the vast majority of such names.  But the Ki-44 was first recognized over China.  So the Chinese office issued the name.  For reasons unknown they named the type after the Japanese Prime Minister.  During the war this code name was very rarely used.  The Tojo looks enough like other Japanese fighters, and it was often used in mixed formations, so it was rarely noticed as anything other than an Oscar (or Zero) by allied pilots. 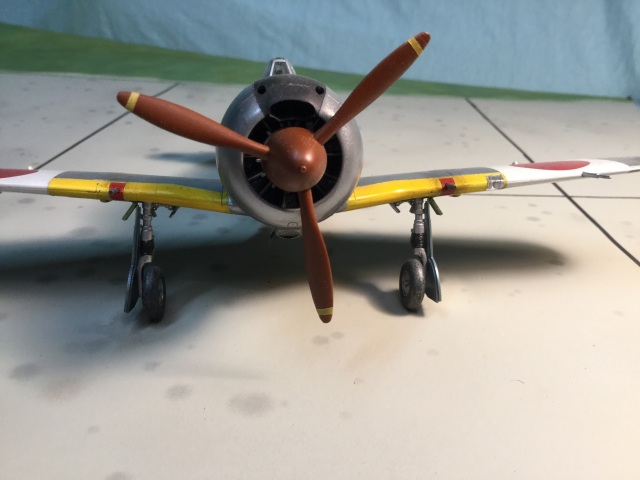 That leads to a few comments about usage of the Tojo.  Its official name was “Army Type 2 Single Seat Fighter” (see “What’s in a Name – Japan” for a description of how long designations work) which would indicate the type entered production in 1942.  But several prototypes were deployed right at the start of the war in Malaysia and Indonesia.  Theoretically this was to evaluate the type and develop tactics.  Some of the test pilots were determined to use the Tojo like any other fighter and had scathing comments about its worth.  But a few pilots saw its true worth and were enthusiastic about its potential.  The first full Tojo units were deployed to China in late 1942 and quickly proved to be the most effective Japanese fighter in theater.

Three “Modern” Japanese types at the start of WWII. Allied pilots typically called all three “Zero”, even though only the grey one here is actually a Navy Type 0.

The Ki-43 Oscar and Ki-44 Tojo. The Oscar was a more traditional Japanese fighter, light weight and highly maneuverable. While the Tojo was more powerful, faster, heavier.

The Ki-44 proved particularly effective when the Japanese switched over to the defensive as the best interceptor they had.  This was particularly noteworthy during the defense of the Home Islands from the B-29.  As an early supercharged type the Tojo could not quite get up to B-29 formations above 30000 ft. Or if it did, its handling was very sloppy and the plane hung on the edge of a stall.  But with its heavy firepower the Tojo could often be found just below the Bomber formations ready to pounce on aircraft damaged by AA or other fighters.  At about this time the Japanese started making more regular use of ramming tactics; this was always controversial in Japan.  Many unit commanders felt it was not good math to loose a fighter just to bring down one bomber, and of course, pilot survivability was always poor in this sort of attack too.  In time, the Americans decided bombing accuracy would improve by flying lower, which played directly to the Tojo’s strengths.  Eventually P-51 Mustangs were based on Iwo Jima to escort the B-29 formations and the same sort of epic battles took place over Japan that had earlier been fought over Germany.

The white bands under the national insignia indicate an aircraft assigned to home defense. 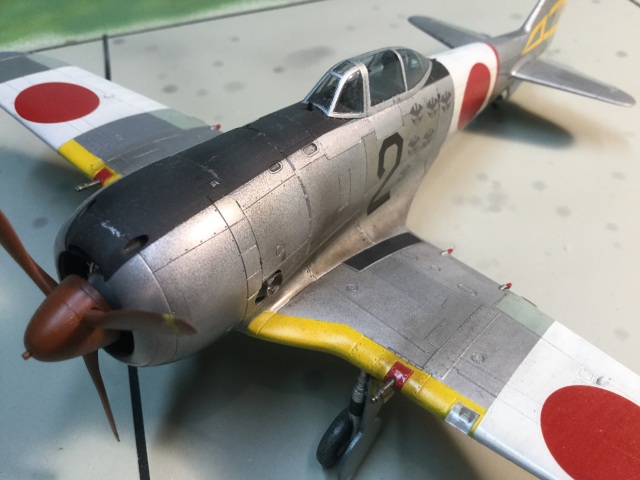 This subject is from the Hasegawa kit with Aeromaster decals.  This aircraft was assigned to Warrant Officer Makoto Ogawa.  The six eagles on the side of his plane represent his six B-29 claims at this point.  He would finish the war with 9 kills, seven B-29 and two P-51.  At least one of those B-29 kills was scored at night.  His preferred method of attack was from head on and below.  Many experienced pilots, both Japanese and German had discovered similar tactics to be most effective against American Heavies.  Although usually this works out to the dreaded “twelve o’clock high”, perhaps the Tojo’s struggles at high altitude account for WO Ogawa preferring the twelve o’clock low attack.  Or it may be because the B-29’s defensive strengths are little different than a B-17 or B-24. Either way, head on is a difficult problem for defensive gunners.

By the time of these final battles the Tojo was considered an older design.  It clearly did the best of any of the older fighters still in service, but several newer types such as the Ki-61 Tony, Ki-46 Dinah, Ki-84 Frank and Ki-100 were even more effective.