Back to the truly iconic types of World War II.

The Supermarine Spitfire and Hawker Hurricane were contemporaries.  They both first flew in the mid-1930s and were among that first generation of enclosed cockpit, retractable landing gear, monoplane designs.  But in significant ways the Hurricane was a more traditional design with fabric and aluminum skin over a steel tube and wood frame structure (see comment below by shortfinals for a more detailed description).  By comparison the Spitfire was a true revolutionary.  It used more modern construction and had more advanced aerodynamics.  In fact, the Mk I Spitfire, with the same engine as the Mk I Hurricane was 30 miles per hour faster.

But there’s a price to pay for being revolutionary.  The structure and controls needed to be fine tuned to handle that extra performance.  Even more, it took time to get a factory up and running that could produce those new structures rapidly. Even field maintenance and repairs required new training and techniques.  So when war broke out in September of 1939 the RAF had far more Hurricanes on hand than the new Spitfire. And up through the Battle of France the RAF was hesitant to send Spitfire squadrons off to serve away from home.  This meant Hurricane and even Gladiator squadrons gained combat experience while Spitfire squadrons trained and built strength. 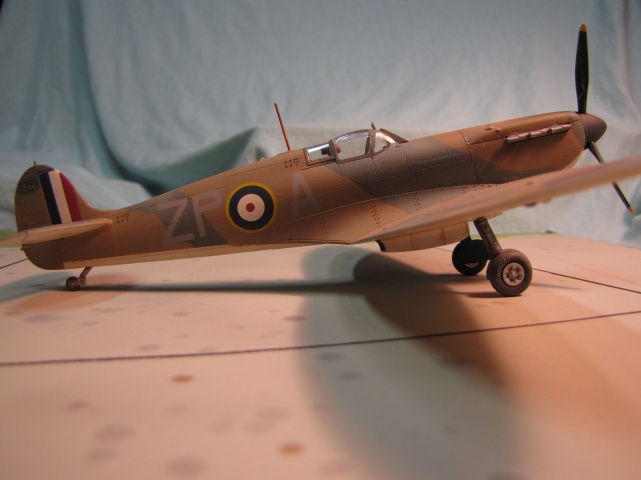 After the fall of France the Germans began attacking Britain in greater force.  Hurricane squadrons still outnumbered Spitfires by over 2 to 1, but Spitfires quickly proved their worth.  When the Battle of Britain picked up speed in August of 1940 it was determined that Spitfires should go after German fighters while the Hurricanes went after bombers, whenever possible.  This proved an effective division of labor.  Not surprisingly Hurricanes would score more total kills, while Spitfires had a better kill ratio.

Squadron Leader Sailor Malan in the cockpit of his Spitfire.

This particular subject is from the Tamiya kit with Superscale decals.  It is in the markings of a plane flown by Squadron Leader Adolph “Sailor” Malan of Number 74 Squadron.  Sailor Malan was one of the best known and most successful pilots of the Battle of Britain with 27 kills.  Sailor Malan was a South African who joined the RAF after previously working as a sailor.  With a given name of “Adolph” it is perhaps not surprising he preferred to go by his nick name.  Under his leadership No. 74 Squadron was one of Britain’s best during the Battle of Britain.  Malan stressed tactics and teamwork and was known for his “10 rules of air fighting”; he was also known to prefer damaging German aircraft to destroying them because he wanted the German home front to have to deal with injured and maimed servicemen, an attitude that came from living in a Britain that was under constant air attack.

Post War he returned to South Africa and was heavily involved with something known as the “Springbok Legion” which was formed to oppose South Africa’s new fascist government and Apartheid.  Sailor Malan died of Parkinson’s Disease in 1963.

12 Responses to Supermarine Spitfire Mk I