Obviously a Mustang, right?  Or maybe a Bearcat if we stretch the definition of World War II combat types?

I’m guessing you all can deduce from the pictures that was actually a Thunderbolt. 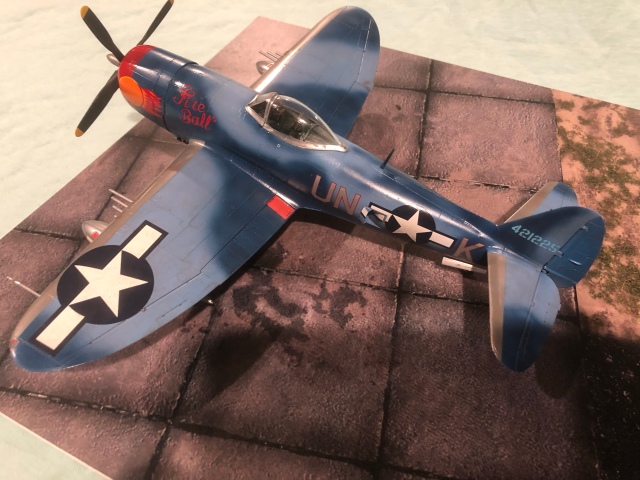 In the ongoing effort to get the most from its basic design, Republic pulled three P-47D models from the production line and put the latest version of Pratt & Whitney’s R-2800 engine on them. They tagged this new sub-type a XP-47M. Actually, they did this to four sequential airframes, but one of them was further modified into the XP-47N.  We’ll save that story for another day.
The particular engine used was the R-2800 -14W/-57, also known as the “C Series”.  This was paired to a new CH-5 turbosupercharger and given water boost.  That is a lot of mumbo jumbo and I don’t honestly know what all distinguishes different versions of the engine, just note that horsepower and reliability were typically improved over the life of any engine.  MOST World War II era aircraft had mechanical supercharging, exhaust driven turbocharging, or both.  An engine with neither is called “normally aspirated” and often works fine on the ground, but performance will drop off quickly as the air thins above 10000 feet.  The turbo or super charging increases pressure and airflow through the engine.  It is often seen with multiple speeds or stages, that got increasingly more sophisticated as the War went on.  The better an aircraft’s performance is at a range altitudes allows it to better set the terms of combat.  Especially if you can always get above the other guy and have good speed while doing it.  The best high altitude types usually had both types (turbo- and super-) like the Thunderbolt.
The water boost appeared on several late War variants of the R-2800 engine. It could, for 5 minutes or so, cool the cylinder heads to allow denser air into the piston and increase combustion power.  This works until the water reservoir heats up to the point its no longer cooling.
At maximum boost this engine put out one horsepower per cubic inch of displacement.  That’s 2800 horsepower.  That’s a lot.

Loaded for maximum range.  If that massive engine is used for lifting fuel, the Thunderbolt has about the same range as a Mustang.  But uh, that’s with about twice the fuel…

I think this angle emphasizes the type’s slim body!

The P-47M originally had only a single hard point under the belly to keep it light and sleek (errr, well, for a Thunderbolt).  But it was quickly determined more would be needed both for extra fuel and ordinance, so underwing pylons were usually added.  Only 130 of these ultimate hot rod Thunderbolts were built for the exclusive use of the 56th Fighter Group; it had already been decided they would be the only Thunderbolt group still tasked with air-to-air missions in the last months of the European air war.

In two years of combat the Thunderbolt was developed quite a bit.

Officially the three squadrons of the 56th Fighter Group were differentiated by the rudder color.  Red for the 61st Fighter Squadron, yellow for the 62nd FS and blue for the 63rd FS.  Unofficially, each squadron carried its distinct “camouflage”  scheme from June 1944 to the end of the War.

Unfortunately, when the P-47M was first delivered in January of 1945 it had serious problems.  This mostly meant engine failures.  After several frustrating weeks, including the dreaded consideration that the 56th might convert to Mustangs (!), the problems were finally traced to the ignition harness.  This did require new hardware on every single “M”, but in the end the Group flew this very fast mount for the last months of the European War.

Thunderbolt is clearly bigger than its common adversaries.  It was also more powerful, and at high altitude completely dominant.

This particular plane was with the 56th Fighter Group, 63rd Fighter Squadron.  It was flown by Lt PG Kuhn who had one kill in the air, four on the ground.  By 8th Air Force rules that made him an ace.

This is the Tamiya kit with Aeromaster decals.  This was also my second try with Alclad metallic paint, and I would say I was much happier this second time around.  I still have some learning to do!  But I’m more confident I can hide my mistakes this time around and feel less need to explain myself.  So hey, that’s progress!

But there was at least one German type that wasn’t so easy to catch.  At least in the air; extensive fighter sweeps ahead of the bombers and after the bombers proved very effective.  The 56th FG in particular excelled at this.

I'm 5o-something years old and live in Ypsilanti, Michigan. I'm happily married to Jodie. I was an air traffic controller for 33 years and recently retired; grew up in the Chicago area, and am still a fanatic for pizza and the Chicago Bears. My main interest is military history, and my related hobbies include scale model building and strategy games.
View all posts by atcDave →
This entry was posted in Uncategorized. Bookmark the permalink.