The Bristol Beaufighter may have been the first design meant to be a night fighter from the very start. It entered service in early 1941 to combat the Luftwaffe’s night time blitz of English cities.

After the jump, a brief look at this capable aircraft.

The Beaufighter came from a family of related designs.  Going back to the Bristol Blenheim fast bomber of the mid 1930s.  A follow on design was a dedicated torpedo bomber, the Bristol Beaufort.  When a night fighter derivitive of the Beaufort (the Beaufighter name is simply from a “Beaufort fighter”) was ordered Bristol literally pulled a Beaufort off the line and started modification from there.  The wings and rear fuselage were mostly retained.  But the forward fuselage was modified with a smaller nose and radar equipment replacing the bombardier position.  The torpedo bay was replaced by gun mounts; four 20 mm cannon firing out just below the pilot’s feet.  The rear turret position was replaced by a radar operator/navigator station.  The Bristol Taurus engines were upgraded to Bristol Hercules to give the aircraft more fighter-like performance.  And finally six .303 Brownings were mounted in the wings asymetrically; four to starboard, two to port.  This all made the Beaufighter the most heavily armed aircraft in the world until some B-25s were given up to 14 heavy machine guns late in 1942.

The great advantage of modifying a proven design was it let British push this into action quickly.  It replaced Blenheim night fighters and was nearly 50 knots faster.  The airborne radar was short range, but the British had a well developed radar net that let them guide aircraft in close to intruding bombers.  Close enough for the on-board radar to get a good signal and let the pilot run down and destroy the enemy aircraft.  Luftwaffe losses accordingly increased quickly on these night missions.

The Beaufighter was a capable enough aircraft it was acquired by Coastal Command for use as a naval strike aircraft too.  Ironically, some versions were even modified to carry torpedoes.  A number were also acquired by the US Army Air Force and served as the first equipment for American night fighter squadrons in Europe.  And finally the type entered production in Australia for use a tactical support and naval strike aircraft.

A two man crew. The pilot sits front and center while the radar operator sits further back. 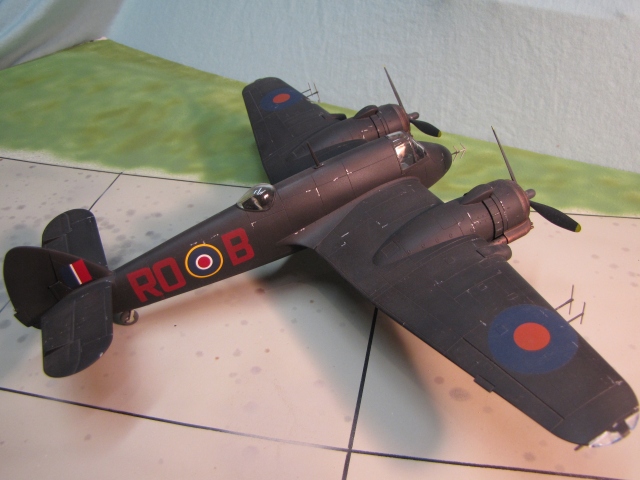 This particular Beaufighter is a night fighter from the Tamiya kit, with Cutting Edge decals.  The camouflage here is known as “Special Night”, it’s basically a very flat black.  Everyone involved was rather shocked to discover this was actually lousy camouflage.  Apparently flat black is so absorbent of all light it actually creates a pretty noticeable darker than night spot in the sky.  Later the British (and eventually Americans) would switch to a gloss black which proved to be far more effective.  While the Germans came to a favor a much lighter grey scheme (much like modern Haze Grey) that may have been the best night scheme of them all.

A Beaufighter and the aircraft that would eventually replace it, the Mosquito.

I'm 5o-something years old and live in Ypsilanti, Michigan. I'm happily married to Jodie. I was an air traffic controller for 33 years and recently retired; grew up in the Chicago area, and am still a fanatic for pizza and the Chicago Bears. My main interest is military history, and my related hobbies include scale model building and strategy games.
View all posts by atcDave →
This entry was posted in Britain, Fighter - Night and tagged Aircraft Models, Scale Models, World War II. Bookmark the permalink.

11 Responses to Bristol Beaufighter Mk If