Maybe not quite as well known as some types, the Hawker Typhoon was a fast and powerful machine that became best known for close support work.

After the jump, a fighter best at working down low!

There is a lot I find fascinating about this fighter. This is one of the few British types that was actually optimized for low altitude work.  It was designed around the Napier Sabre engine.  In the late 1930s this was to be one of the next generation, the 2000 hp class engines.  Napier took a fairly unique approach with an “H-Block” engine.  Now I am not an engineer or mechanic, but that just sounds like an awful lot of cams, rods and belts to me!  I’m not exactly sure what advantage the engineers thought this would give them; but I’m guessing it ties into frontal area and displacement issues.

The Typhoon was a fairly conventional, if rugged, design.  It featured a thick, high lift wing.  Production nearly ended early on because of serious development problems; but the Luftwaffe using Fw190 fighter bombers for hit and run raids across souteastern England led to the Typhoon’s rapid deployment in late 1941.  It was the only plane that could catch the 190 on the deck. 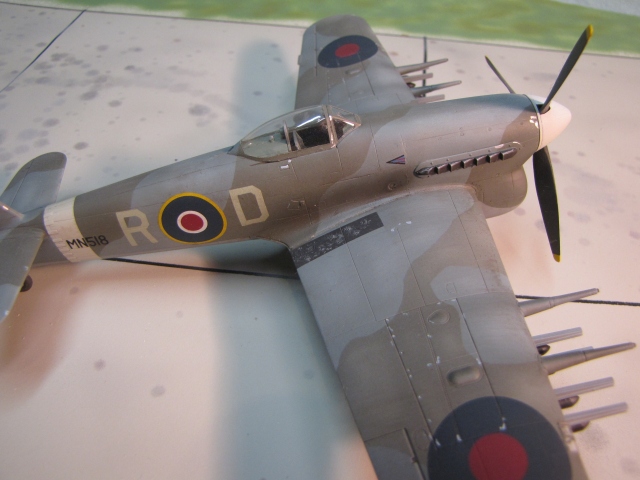 The first version would be the Mk Ia with 12 x .303 guns in the wings. After 110 examples production switched to the Mk Ib with 4 x 20 mm cannon.  This would be the major and final production version of the plane. 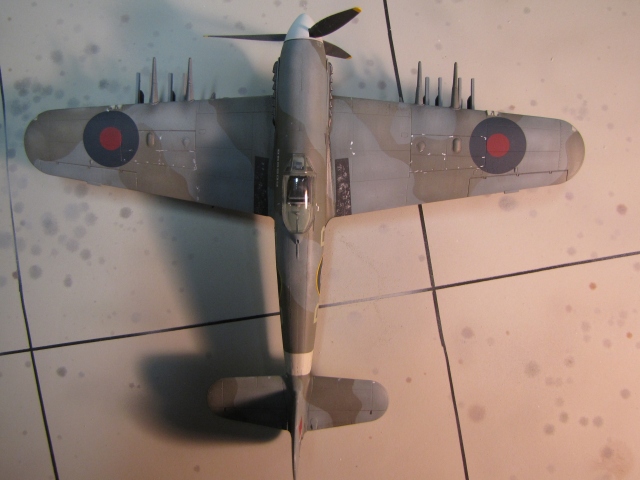 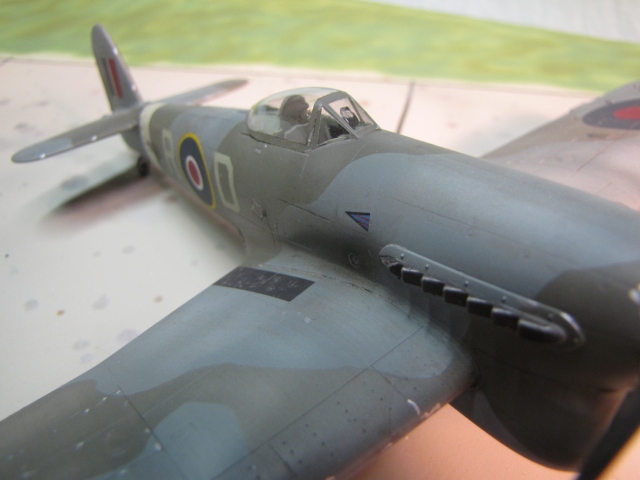 But a few interesting changes occured during Mk Ib construction.  The most significant may have been a radical idea for a blown plexi-glass bubble for the pilot’s canopy.  It would replace a more traditional framed structure and car-like doors.  This was experimented with from January of 1943 and showed up on service aircraft in August of 1943.  To say this was a popular change would be an understatement.  The older “car-door” Typhoons were modified to the new standard, and Supermarine started work on modifying the Spitfire with the same sort of canopy.  American pilots and manufacturers took note too.  Republic got ahold of one of the pre-production bubbles and modified a Thunderbolt to take it; and North American designed their own bubble canopy to put on their Mustang.  This may be the Typhoon’s most lasting legacy, the bubble canopy has been common in fighter design ever since.

Operationally the aircraft would be best known for ground attack and close support work.  This started in September of 1942, but really caught on a year later when Typhoons made the first rocket attacks.  A single Typhoon could now fire the equivilant of a destroyer broadside.  Other aircraft were involved in these sort of missions too, but the Typhoon would prove to be a beast of an aircraft well suited to this role.  It had heavy firepower, could carry a heavy load and take beating.

Towards the end of 1943 the 2nd Tactical Air Force was formed to wage war against German military targets, and ultimately to provide close support for the coming invasion.  18 Typhoon Squadrons were the fighter component of the 2nd TAF.  And alongside the US 9th Air Force they would devastate German transportation and military targets to the end of the war.  Typhoon and Thunderbolt were the two most dreaded words to German soldiers and armor crews.

This is the Hasegawa kit with Super Scale decals.  It was flown by Wing Commander RTP Davidson of 143 Wing, 2nd TAF.  W/C Davidson has one of the more diverse score tallies of the war, having made ace by destroying two Japanese, two Italians and two Germans.  He did his part in destroying the Tripartite Pact!

Up Next: North American SNJ-4 Texan