Looking like a relic from the previous war, the Fairey Swordfish proved to be a good weapon for a variety of missions.  It served from the first day of World War II to the last and outlasted its replacement. 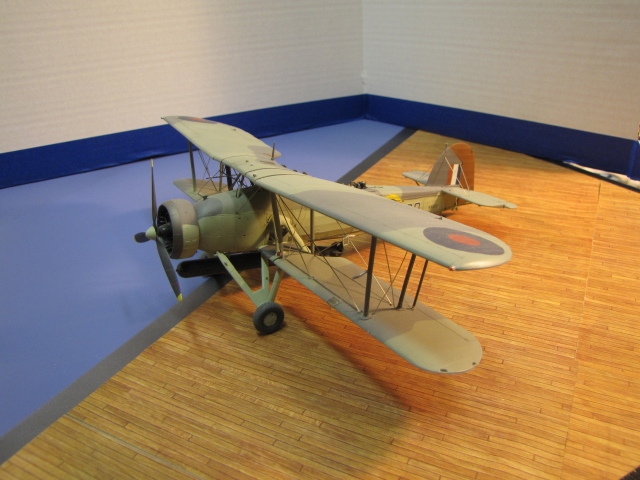 After the jump, the Royal Navy’s premier Torpedo Bomber.

The Swordfish first flew in 1934, making it one of the very oldest aircraft to be successful during World War II.  It was designed to be a Torpedo Bomber, Scout plane, and all purpose naval bomber.  With a top speed below 150 mph, there’s no doubt it was vulnerable to interception.  But the Royal Navy did not initially consider this a major problem for a couple reasons; mainly, Fleet Air Arm (FAA) doctrine expected that carrier based aircraft would operate at sea, away from shore based air power.  Second issue was that until just a few months prior to the start of World War II (May of 1939), the FAA was a part of the RAF.  And the RAF was not very interested in spending any of its limited development budget on aircraft for the Royal Navy. 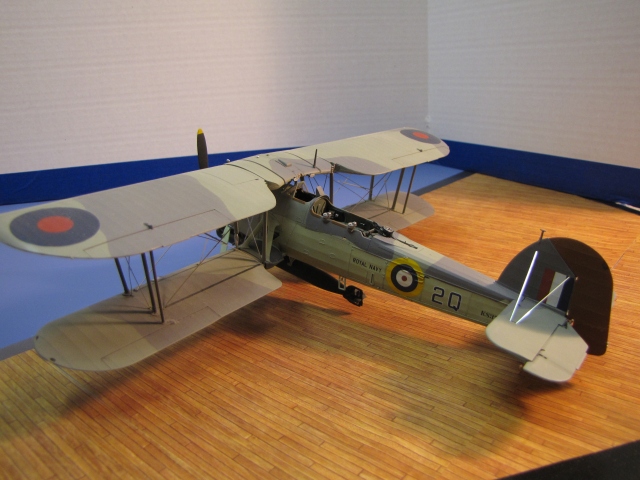 The red-brown rudder is fabric dope; this rudder has obviously been recently replaced!

So the FAA was stuck with leftovers, at best.  Fortunately, the Swordfish proved to have many virtues.  Many pilots described as the most aerodynamically perfect machine they ever flew.  Its flight characteristics at almost any speed and with any load were docile and predictable.  This is ideal for operating in a carrier environment.  It also proved adaptable to a variety of load outs and missions; from torpedo strike, to tactical support, to anti U-Boat patrols.  This last would keep it in business even after bigger, faster types took over the more aggressive missions. 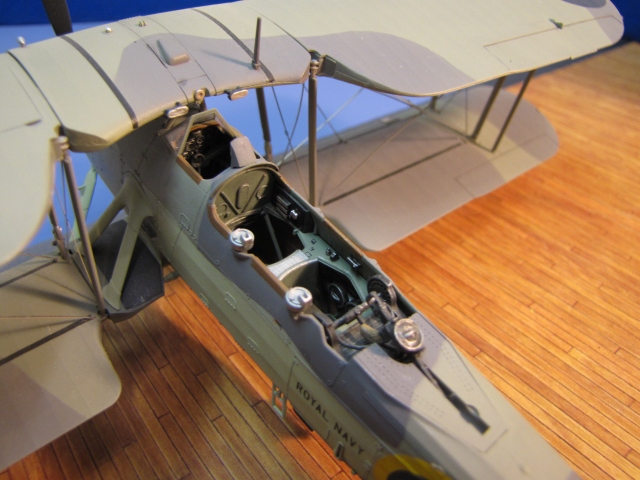 Crew seating. The Pilot has the separate bay in front. Navigator/Radio Operator in the middle, gunner in back. The rear gun is in the stowed position here.

Its low speed handling would also be a huge asset on smaller flight decks.  Two responses to the U-Boat threat were MAC ships and Escort Carriers.  The MAC ships, 30 of them, were Merchent Aircraft Carriers.  That is, a commercial cargo vessal with a flight deck on its upper works.  This was good for maybe a dozen aircraft, usually all Swordfish.  The Escort Carrier was a true aircraft carrier, converted from a cargo ship or tanker. 130 of these “Baby Flat Tops” were made during the war by the US and Great Britain.  They usually carried around 30 aircraft, usually a mix of fighters and patrol bombers.  The Swordfish found itself employed on many British Escort Carriers to the end of the war. 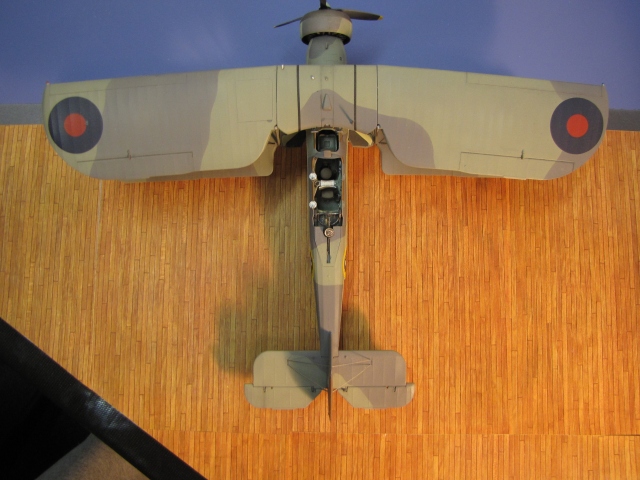 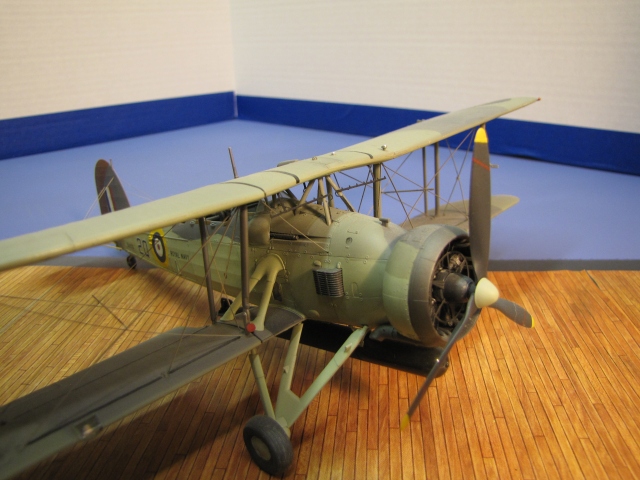 The black bar across/above the top of the fuselage is for calculating torpedo drop angles. The forward machine gun is visible just starboard/forward of the pilot’s position. The red circles at the base of the forward wing strut is the release mechanism for the wing fold.

Later Swordfish would carry search radar, depth charges, bombs and rockets.  Its affectionate British nickname was “Stringbag”, which is apparently calling it an old woman’s purse.  It could carry anything. 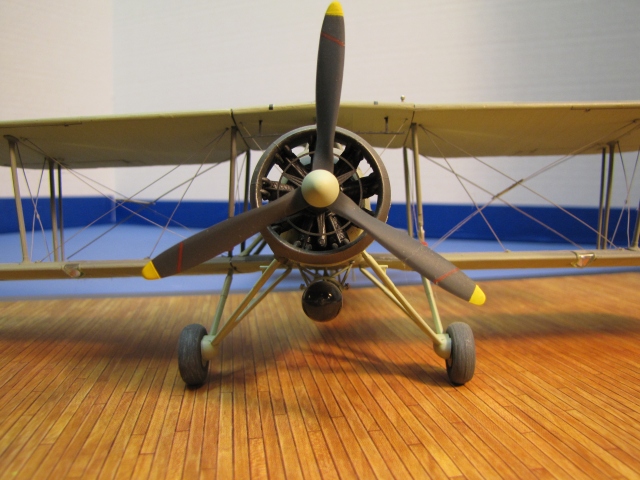 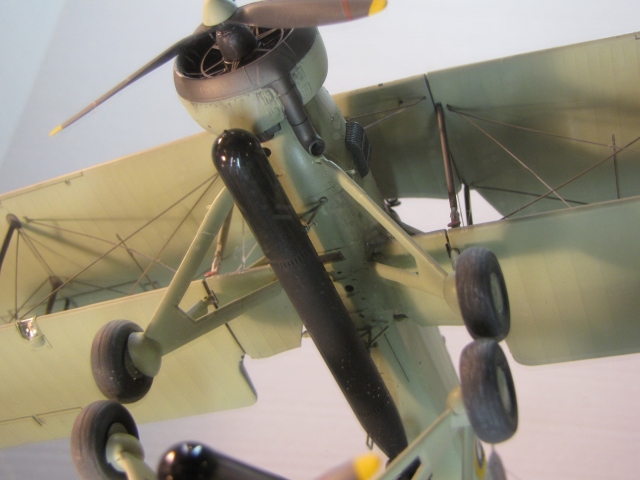 But this Swordfish is armed for big game.  It was based on the HMS Ark Royal in May of 1941 when it participated in torpedo attacks on the German battleship Bismark.  Two airstrikes were launched in appalling weather conditions.  The second strike managed to put two torpedoes in the Battleship.  One of which jammed the rudder at 15 deg port.  That meant the Bismark was crippled, and a sitting duck for British Battleships King George V and Rodney the next morning.

If you get a chance, I highly recommend the classic 1960 movie Sink the Bismark starring Kennith More.  The main character, Captain Shepard is a composite, but the flow of events is accurate and well done.  Some fun trivia; after giving the British the slip, the Bismark was re-acquired by a Catalina flying boat.  This had recently been lend leased to Britain for the US.  So recently, it has been discovered that it was flown by a US Navy pilot (this is while the US was still “neutral”).  Second item; When Bismark sank Hood, only three of the 1100 men on board survived.  One of them, Esmond Knight, plays the captain of the Prince of Wales in this movie.

Then listen to the Johnny Horton classic song Sink the Bismark, and just try to get it out of your head afterwards… 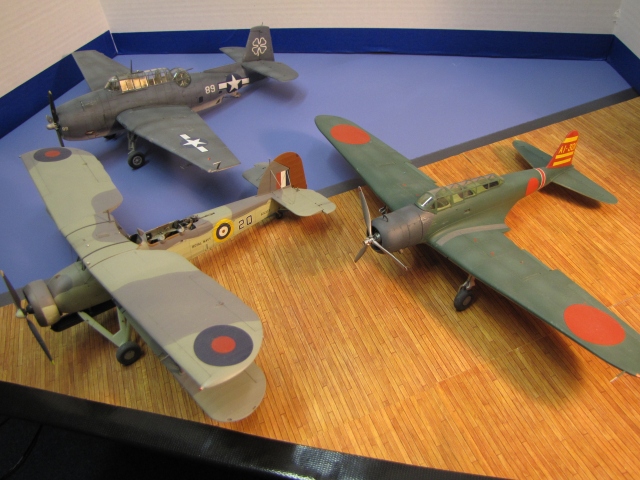 The three major carrier based torpedo bombers of World War II; Swordfish, Avenger and Kate.
Lend Leased Avengers would replace the Swordfish on British Fleet Carriers in the last two years of the war (but not most Escort Carriers).

This model is the Tamiya kit, with the separate photo-etch set (mostly for the rigging).  The decals are from Aeromaster.  This was a fun build.  Tamiya kits are always a delight, nicely detailed and perfectly engineered for fit.  And the pure complexity of this subject made for a lengthy but fun project.

I'm 5o-something years old and live in Ypsilanti, Michigan. I'm happily married to Jodie. I was an air traffic controller for 33 years and recently retired; grew up in the Chicago area, and am still a fanatic for pizza and the Chicago Bears. My main interest is military history, and my related hobbies include scale model building and strategy games.
View all posts by atcDave →
This entry was posted in Bomber - Naval, Britain and tagged Aircraft Models, Scale Models, World War II. Bookmark the permalink.

7 Responses to Fairey Swordfish Mk I