Perhaps no aircraft is more symbolic of America’s unpreparedness for war in 1941 than Brewster’s much maligned Buffalo. 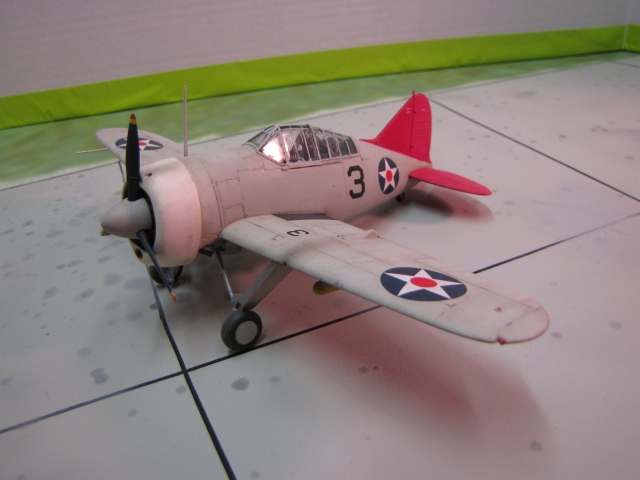 Of course the story only gets more interesting the deeper we look.  So after the jump, a brief look at one of the great enigmas of aviation history.

In American service, the Buffalo only saw combat with VMF-221. That is the Marine fighter squadron charged with the defense of Midway Island at the time of the Battle of Midway.  On the morning of June 4, 1942, VMF-221’s 20 Buffaloes and six Wildcats intercepted the Japanese formation inbound to bomb Midway Island.  The result was a disaster; only two Buffaloes and four Wildcats survived the battle.  One of the surviving Buffalo pilots, Capt Philip White, said “any commander that orders pilots out for combat in a Buffalo should consider those pilots lost before leaving the ground.” 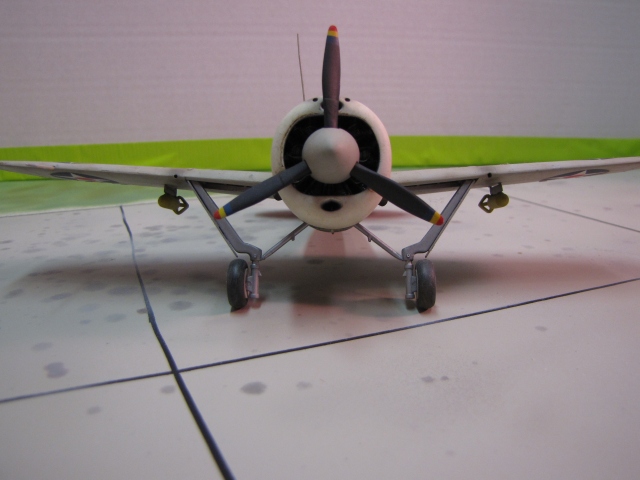 The “W” shaped landing gear was a particular trouble spot for the Buffalo. Especially on a carrier deck, landing gear failures were endemic.

The British, Australians and Dutch had Buffalo squadrons fighting the Japanese in Burma, Malaysia, Singapore and The Dutch East Indies (Indonesia); that fared only slightly better.  The type had already become known as a maintenance nightmare; in the first few months of the Pacific War, Fighting Two (VF-2) on the USS Lexington was equipped with the type.  They never saw combat with them, but suffered casualties at a greater rate than Wildcat squadrons that were in combat. 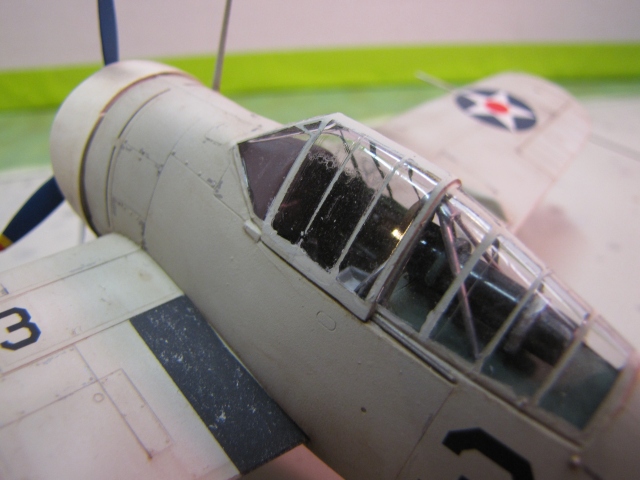 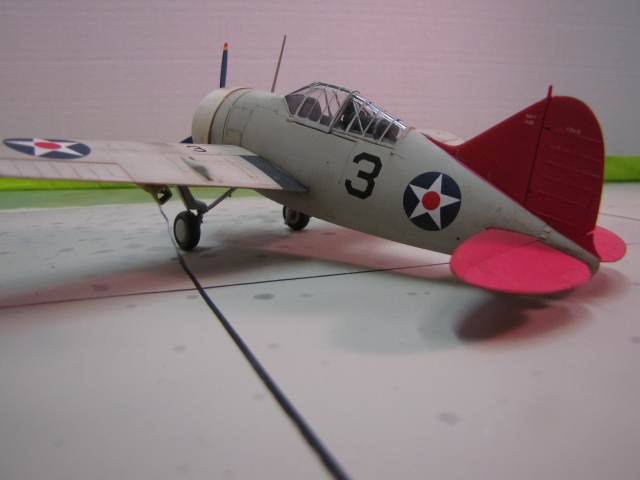 How was such a type even built?  Believe it or not, in 1937 the Buffalo won a design competition, beating out the Wildcat among others.  Apparently many pilots had praise for the Buffalo’s flight characteristics and handling. It was considered a fun aircraft, maneuverable and quick.  But the Navy ordered Wildcats in addition to Buffaloes, apparently because of limited confidence in Brewster’s ability to meet orders. 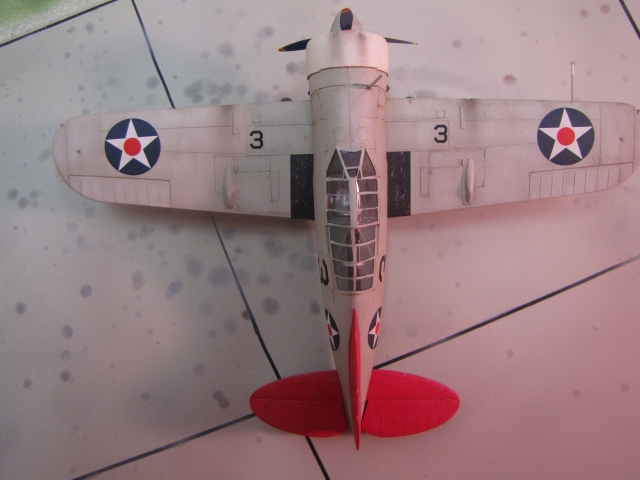 Firepower is two .50s in the cowling, and one in each wing. Four .50s is pretty standard for the era.

But the type was held in high enough regard, that when the RAF’s No. 67 Squadron, equipped with Buffaloes, was assigned to the air defense of Rangoon alongside a Flying Tiger’s squadron (P-40 equipped); several Flying Tigers pilots expressed the sentiment they wished they were the ones flying Buffaloes. 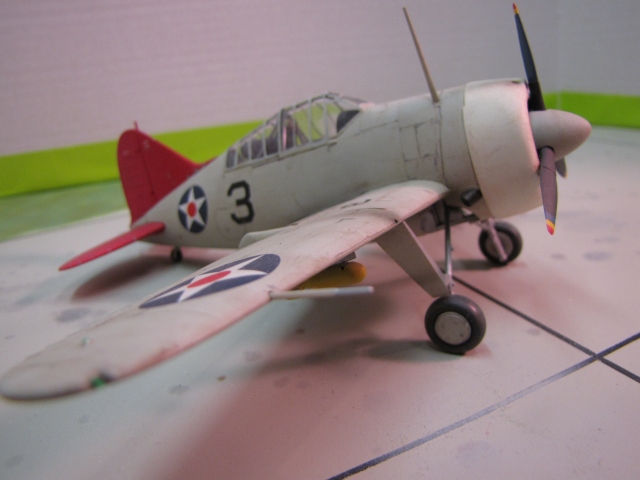 For many American readers, the hardest tidbit to wrap our minds around may be the Finnish experience with the type. Finland received 44 Buffaloes in 1941.  They scored 477 kills for the loss of 19.  That’s a 25/1 kill ratio.  One Buffalo in particular accounted for 42.5 kills with several pilots, making it possibly the deadliest single airframe in the history of aerial warfare.*

Is this the deadliest fighter ever built?

Much of this is just painfully difficult to reconcile.  It has been pointed out the Buffalo started much lighter than the version that saw combat at Midway.  The addition of armor, self sealing tanks and more guns all added weight.  But the Wildcat went through a similar growth process.  I think the story of the Buffalo in American service comes down to two main issues; first is just that the Marine squadron at Midway was green, going up against a highly experienced foe.  Their mistakes started right with a terrible initial deployment and the command decision to dogfight individually instead of employing any sort of group tactics.  Both Buffaloes and all four Wildcats that survived all came from the squadron’s second section which was in a better initial placement. 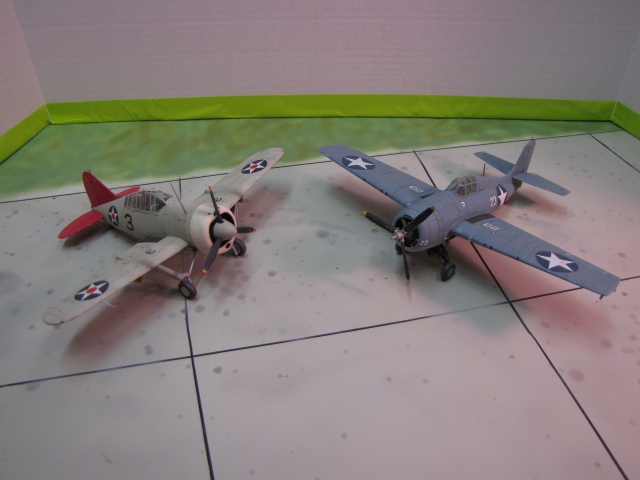 Rivals for the Navy’s heart… or at least a big fighter contract.
The Wildcat seems to have handled increasing operational weights with more grace than the Buffalo. At the very least, the Wildcat was clearly better made.

The second big issue is just that Brewster was building a terrible product.  Regardless of design, nothing could make a poorly built airplane perform.  The Finnish Buffaloes were F2A-1s (B-239s according to Brewster), quality degraded with the later variants, in spite of design “improvements”.  Brewster’s quality issues became so bad that when they were later contracted to build Corsairs, those Corsairs were found to be deficient and they were restricted from combat and sent to training units.  Brewster would become the only major armaments manufacturer to go out of business during World War II.  Think about that a minute.  The US government finally refused to do business with them. During the largest war in human history.

A photo of my actual subject aircraft. Let’s call my build the “before” version!

This is the Tamiya kit.  It wears the markings of a plane that flew at NAS (Naval Air Station) Miami as a trainer in 1942.

* – there is a big qualification to this claim; many aircraft, pilots and units that saw intense combat have no such detailed records.  Especially for some of the German mega-aces, we simply do not have detailed records on how many kills were scored with which airframe.

Up Next:  Buffalo Part II
This Tuesday I’ll have a post featuring pictures from a Finnish reader of the world’s only surviving Buffalo.