One of the cutting edge aircraft of the late 1930s, The Hawker Hurricane was the first British monoplane with semi-monocoque construction (All the structural strength was carried internally.  That means no external bracing wires.), retractable landing gear and fully enclosed cockpit. 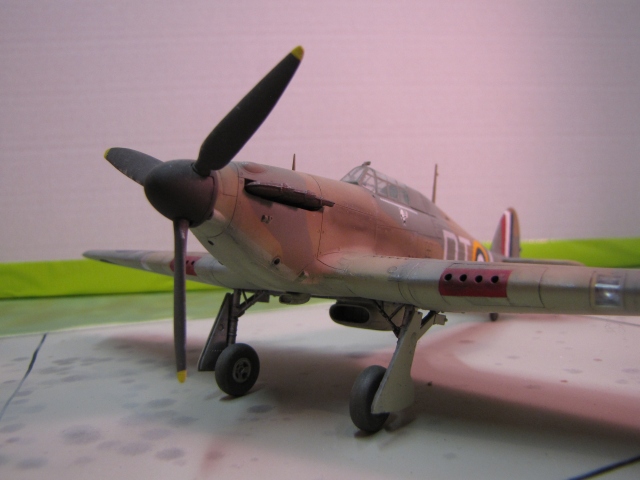 After the jump, we’ll discuss this key British fighter from the very start of World War II.

Its hard to overstate the importance of this aircraft to the combat effort of Great Britain in the first years of the war.  The Spitfire will always be better known, it was the next step of the technology, it was the plane that could face the Luftwaffe’s best on equal terms.  But the Spitfire was so cutting edge, British industry struggled to mass produce the type.  The Hurricane’s greatest strength may have been that it was slightly less state of the art.  The rear fuselage and control surfaces were traditional fabric on frame construction, and the shapes were simpler, with more strait lines.  This made construction and repair easier using an existing skilled workforce.

This translated into far more Hurricanes being available to face German expansion.  In the first months of the war, Spitfires were hoarded at home, while Hurricanes deployed into combat.  When the rest of Europe had fallen, and Britain stood alone against Nazism in that Summer of 1940, Hurricanes still made up almost 70% of British Fighter Command.  In the Battle of Britain, Hurricanes would go after German Bombers while Spitfires went after the fighter cover.  This proved to be a highly effective division of labor, the faster Spitfires against the faster Messerschmitts; while the Hurricanes, with their hardier construction and more stable gunnery were well suited for braving the defensive fire of a bomber formation and getting more shots into a big fat target.  In the end, Hurricanes would account for almost 60% of all RAF kills in that battle.  Hurricanes remained an important, if diminishing, part of British air power around the globe until 1943.

You can clearly see the point aft of the cockpit where the rear fuselage switches to fabric over aluminum.

This particular subject was flown by Squadron Leader Robert Stanford Tuck of 257 Squadron.  He started the war as a Spitfire pilot, but transferred to take command of 257 squadron at the height of the Battle of Britain.  He would become one of the top aces of that battle, and one of the top Hurricane aces of the war, before transferring back to Spitfires.  In 1942 he was shot down on a fighter sweep over France, and finished out the war as a guest of the Luftwaffe.  I highly recommend his biography “Fly For Your Life” by Larry Forrester.

This is from the Hasegawa kit, with Aeromaster decals.

Robert Stanford Tuck retired as a Wing Commander. His final score stands at 30.

Battle of Britain rivals. Notice the size difference. Both aircraft had roughly the same power. The Messerschmitt was faster and better at altitude. The Hurricane more stable, more robust and more maneuverable.

15 Responses to Hawker Hurricane Mk I