Another of the best known aircraft of World War II, the Corsair was a powerful and effective fighter, used mostly by the US Marine Corps.

So let’s take a look at this American Fighter.

The Corsair is a distinctive looking, powerful aircraft.  Just a guess, but I think its the best known American fighter behind only the Mustang.  Funny thing from my visit to the Air Force Museum a couple weeks ago, I had tracked down a docent for a couple questions, and he quickly expressed relief I was not asking him where the Corsair was.  That must be a recurring issue!  I would also guess a lot of that goes back to the late 70s TV show Baa Baa Black Sheep/Black Sheep Squadron.  No doubt that was a big part of my childhood!

There’s a lot that’s interesting about the Corsair, and I’ll look at some of it in more depth on different posts, for different versions.  So for know I’ll start with its distinctive inverted gull wing.  This may be the type’s best defining characteristic.  And its really all about the propeller and engine.  The Corsair used the very powerful R-2800 engine (the same engine as the Thunderbolt and Hellcat).  In order for the power to be utilized, a large propeller is needed.  A large propeller creates ground clearance problems.  Vought chose to avoid the weight issues of a long landing gear with the bent wing.  They mounted a relatively short gear strut at the nadir of the wing.  This proved to be strong and light, a good choice.

Another interesting thing about the Corsair is how it came to be a Marine aircraft.  The Marine’s often got Navy seconds.  Not to say they got poor aircraft, usually, but clearly the Navy got first choice.  Well the Corsair was designed as a Naval fighter.  It was claimed to be the first fighter capable of 400 miles per hour in level flight.  But its very long nose restricted forward visibility, it had vicious low speed handling (most specifically a tendency to snap hard right at stall speed), and its landing gear was notably bouncy.  All of these are problems for a carrier aircraft.  In time, all these problems were sorted out, largely thanks to the British, which is a story we’ll save for another day.  But in early 1943 everyone was clamoring for new, higher performance aircraft NOW.  And the Corsair had a rival in Grumman’s F6F Hellcat. The Hellcat was slightly slower, but was far easier to manage in a carrier environment (it had other virtues I’ll get in to next week).  So the Navy chose the Hellcat. 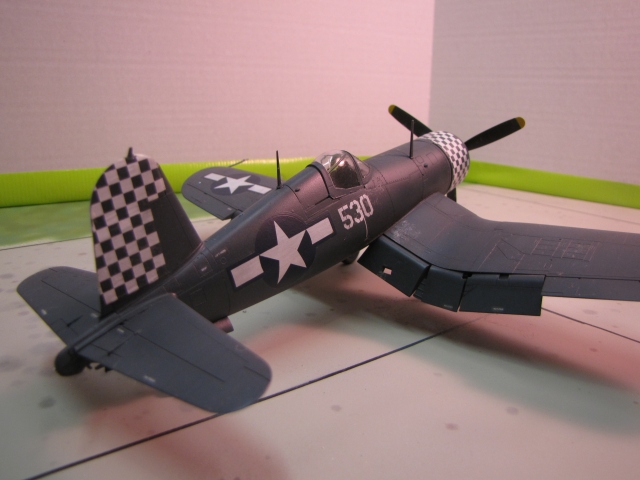 And the Marines settled for the world’s fastest fighter*.  The Corsair was the first allied aircraft in service that was clearly superior to the Zero in the ways that mattered.  It was much faster, especially in a dive, but in climb as well.  It was also rugged and well armed.  And it became a real ace maker; its 11:1 kill ratio was the best of the war. 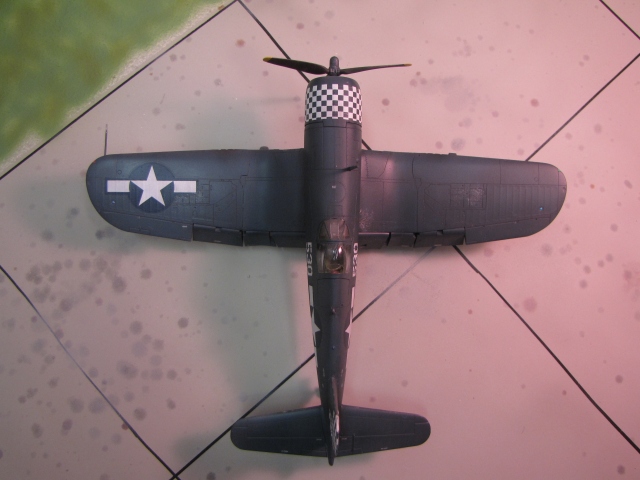 This is the Tamiya kit with Super Scale decals.  It does present a couple of challenges that are uncommon with Tamiya kits.  The inserts behind the cockpit will not line up well if the directions are followed; it works better to install each in its respective fuselage half instead of assembling the whole unit first.  And the folding wings are fiddly in the extended position.  The kit builds up nicely when you’re aware of these issues.

* – all such claims are suspect!  The Corsair may have been the fastest in the world briefly, but by the time it entered service newer prototypes of newer aircraft were flying.  And there’s always so many qualifications; the P-38 was actually the first fighter to top 400, but as a twin Vought completely ignored it in their claims.  The Thunderbolt and Mustang were faster at higher altitudes.  The Spifire Mk XIV and Fw 190D can make serious claims to the title as well.  I repeated the manufacturer’s claim mostly because it struck me as funny.