Why work in only one scale?  And why did I choose the scale I did?

Two front line fighters of World War II. One was in front line service at the very start of the war, one at the end. But that diversity, and pace of development that makes the war endlessly fascinating.

The simplest answer would be that 1/48th just looks right to me.  But after the jump, I’ll offer the longer version of that answer.

There have been many times when I wished I worked in 1/72nd scale.  The models are smaller, they typically build up quicker, and there’s a broader selection of types, especially some of the bigger types. 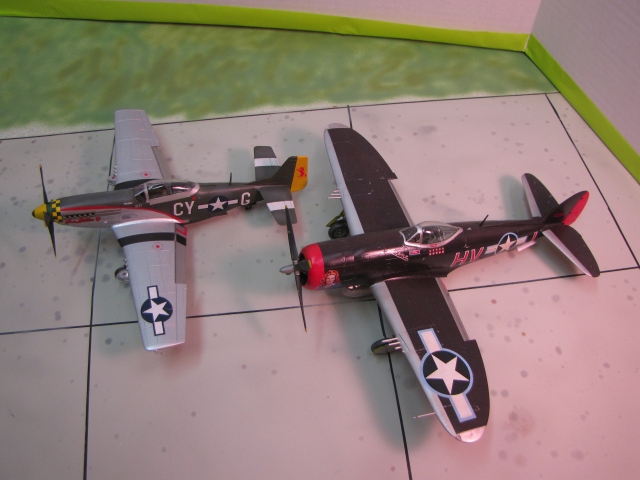 Top two fighters of the US Army Air Force at the end of the war.

And back when I was a kid I often did work in multiple scales. I’m sure like many other boys of my generation,  I was not discerning about scale, or detail or accuracy.  If it looked cool or fun, I bought it.  In fact, going back a step further, many kits from before my time (I started building in 1974) were often in something called “box scale”.  That literally meant the kit was scaled to fit in a certain box size that the kit manufacturer thought would be easy to display for retailers.  It’s funny now, sometimes those kits will be re-released as part of some manufacturers “classics” or “legacy” series and they’ll calculate out its oddball scale at 1/67 or some such silliness.

When I started building; Monogram, Revell, Lindberg and a few other companies were just starting to standardize their scales.  So the most normal thing to me was to see fighters in 1/48th and bombers in 1/72; that defined most of what I built.  For whatever reason, I developed a particular fondness for 1/48th.  That scale is sometimes called “quarter scale” (which is only a little confusing!) because one quarter inch of plastic equals a foot of reality.  But I think as a kid the math had nothing to do with it, I just found myself most comfortable with that balance of size and detail.  And as the years of my childhood hobby passed, more and more of the bigger aircraft found their way into what had become my favorite scale.

Big Friend/Little Friend. The team that won the air war in Europe.

When I got back into building many years later, I quickly decided I wanted all of my subjects to be scaled correctly together side by side.  It is so satisfying to my obsessive little mind to see a Mustang and Thunderbolt right next to each other and know that difference in obvious mass is appropriate and as it should be.  Or if I park a 1942 Ford Sedan right next to a P-40 it’s telling something about how big both objects are.  I’m not really big on figure models, but many kits have some included and I’ll occasionally paint one up, in part because no scale reference is better than a human figure. 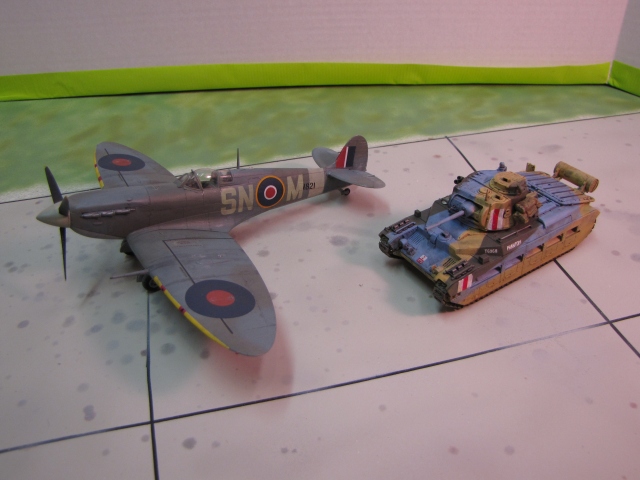 Its funny to me that the tank is seven times heavier than the airplane (25 tons vs 3.5 tons).

It has struck me as unfortunate that so far, I’ve passed very little benefit of that scale consistency on to my readers!  So I have decided, starting here, to start showing some of these scale differences when they strike me as particularly interesting.  A rule I’ve set for myself is not to include any build in this little game until its received its own post.  I know its probably silly, but I would feel bad if any project of mine made its first appearance here as a background piece in some other kit’s article.

Hopefully this will add a little more visual interest to some of my pictures too.  I’m not really a diorama builder, but I do often plan out which kits will sit next to each other on my shelves quite carefully.  So this will be the blog version of that. 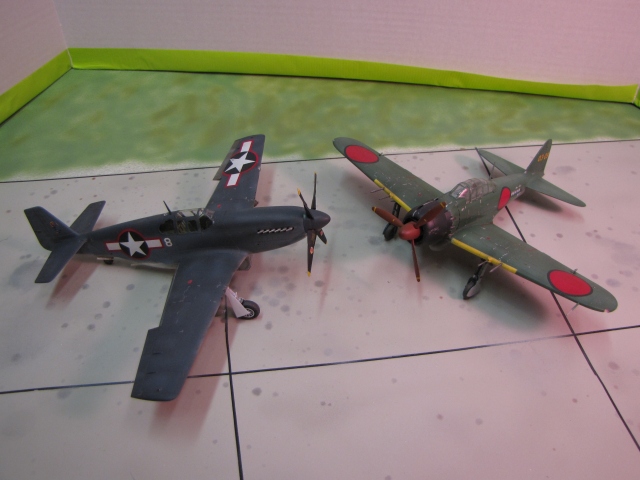 If the FJ-1 had existed, it would have fought the Model 52c Zero!

I may, eventually do some compare/contrast sort of posts too.  Things like the whole family of Mustangs, or how to tell a Zeke from an Oscar.  I dream big.  And this is how a grown model builder plays with his toys…

I'm 5o-something years old and live in Ypsilanti, Michigan. I'm happily married to Jodie. I was an air traffic controller for 33 years and recently retired; grew up in the Chicago area, and am still a fanatic for pizza and the Chicago Bears. My main interest is military history, and my related hobbies include scale model building and strategy games.
View all posts by atcDave →
This entry was posted in Dave's Essays and tagged Scale Models. Bookmark the permalink.