The Martin B-26 Marauder had one of the most completely mixed reputations of any World War II aircraft.  After a very poor start, it would finish the war with the lowest loss per mission rate of any allied bomber. 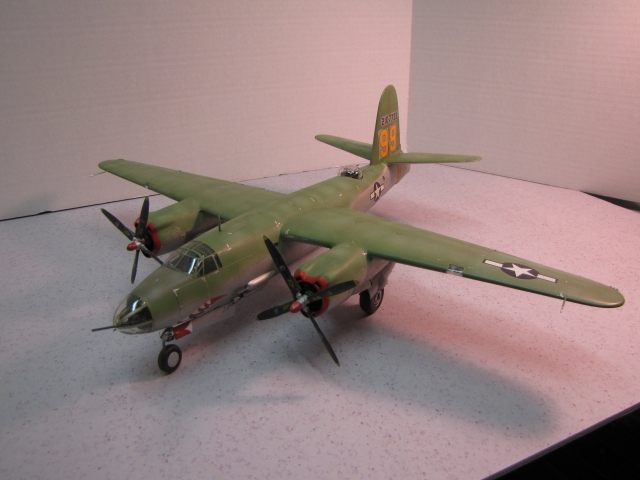 After the jump, a brief look at the American Medium Bomber.

The Marauder started from an Air Force requirement for a medium bomber with a 3000 mile range, 2000 lb bomb load, and a 350 MPH top speed.  This was a fairly big engineering challenge for the late 1930s.  The Martin team rose to the challenge with the most powerful engine currently available (R-2800), a streamlined torpedo shaped fuselage, and small wings.  The plane met the requirements and more; notably being faster with a heavier load than demanded.

But this led to problems too.  Most significantly, in an age where aircraft rarely landed at more than 60 kts, the Marauder touched down at 120.  It also developed a terrible reputation for single engine performance, and quickly became known as a pilot killer.  As such, it picked up a variety of non-flattering nicknames like “Widowmaker”, “Martin Murderer”, “Flying Coffin”, “B Dash Crash”, “Flying Prostitute” (its small wings gave it “no visible means of support”) and others I won’t repeat here.

The Air Force and congress launched investigations and Martin looked into a variety of fixes; but ultimately the best “fix” may have been a series of demonstration flights put on by famous stunt pilot Jimmy Doolittle that showed the plane’s excellent handling in a variety of circumstances, including single engine flight.  This morale boost was almost undone when several early missions out of England went disastrously wrong, notably the second mission that resulted in the loss of the entire attacking force.  Little details like no fighter escort, repeating the exact mission profile from the day before, and attacking at a low altitude already demonstrated to be unwise were almost missed in the uproar that ensued.  But in the end, mission planning that played to the type’s strengths (medium altitude, high speed, with fighter escort) made the B-26 force hugely successful. 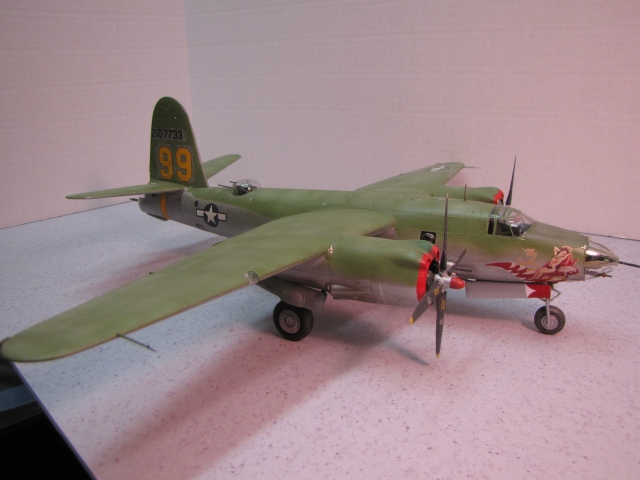 “My Darling Agitator” flew with the 320th Bomb Group in the 15th Air Force. She apparently survived to the end of the war. 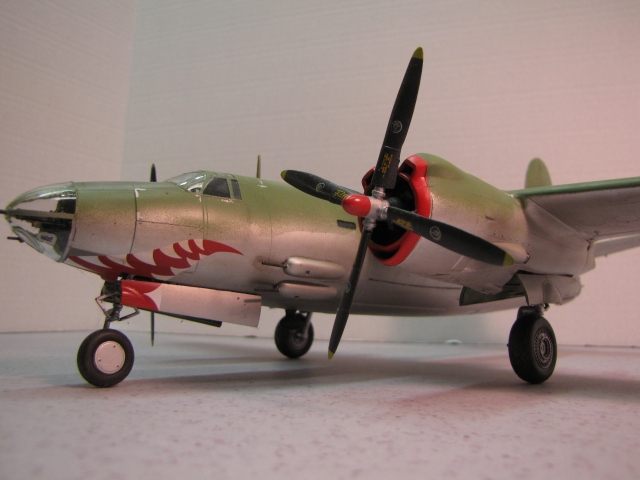 This example is from the Monogram kit with PYN-up decals.  This is truly a vintage kit.  I remember being awed by its level of detail when I was a kid.  It still holds up pretty well in that regard, certainly it has as much detail as anyone will ever see through those tiny windows!  But wow is the fit terrible.  Okay, maybe not the worst I’ve seen; but between the fact older kit tolerances aren’t what we expect from a modern tool, and this particular molding has been used many, many times, this really requires a lot of work to bring together.  Especially in the area of the cowlings and nacelles .  I used a lot of filler, and many hours sanding.  I think it was worth it though, I’m pretty happy with how it came out.

I really took a guess on the top color.  I’ve seen a couple black and white photos, and a single color one that is somewhat faded out of this particular subject.  It has a field applied top color of indeterminate origin.  It is something light, but whether it is a gray or green I can’t be sure.  My best guess would be a standard American top color like Olive Drab or Medium Green mixed with a white or light gray.  Lightened Medium Green is what I finally went with.  I like the look.  I can’t swear to its accuracy.

I'm 5o-something years old and live in Ypsilanti, Michigan. I'm happily married to Jodie. I was an air traffic controller for 33 years and recently retired; grew up in the Chicago area, and am still a fanatic for pizza and the Chicago Bears. My main interest is military history, and my related hobbies include scale model building and strategy games.
View all posts by atcDave →
This entry was posted in Bomber - Tactical, USA and tagged Aircraft Models, Scale Models, World War II. Bookmark the permalink.